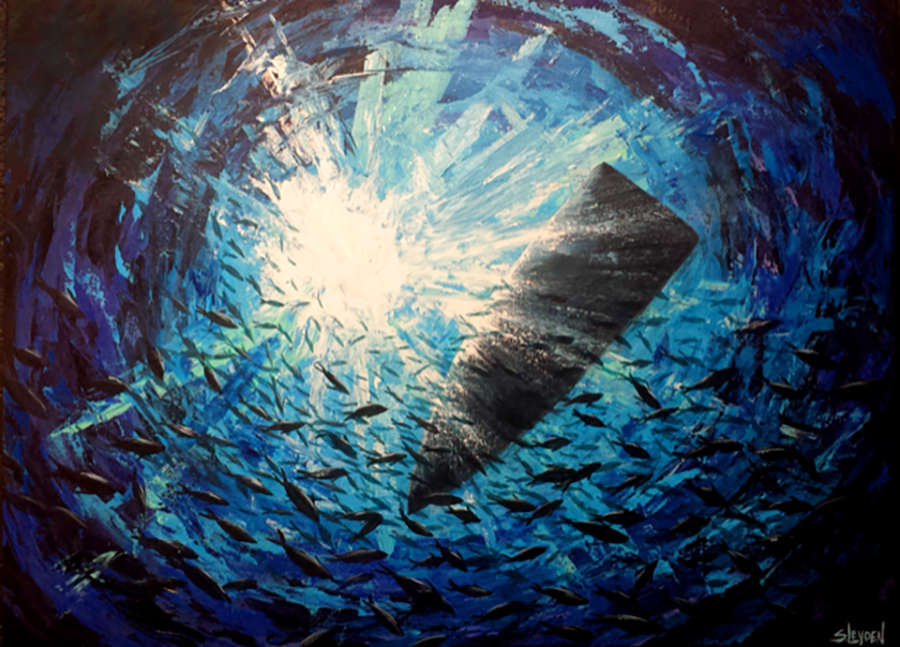 Let There Be Art

Unknown to most people who’ve enjoyed the monthly art walks in emerging Fort Lauderdale scenes such as FATVillage and MASS District, there’s an interconnected group of artists and activists making personal sacrifices to transform the city into a culturally rich community.

They’ve lived in blighted areas, had their cars broken into, and have been late on college loan payments in order to make their artistic endeavors and related activities possible.

They follow in the path of businessmen and development partners Doug McCraw and Lutz Hofbauer, who, in 1998, bought 2.5 acres of Flagler Village warehouse space to house galleries and low-rent studios that are accessible to emerging artists (hence the name “FAT,” which stands for Flagler Art and Tech). Today, the area represents more than five acres of property and continues to fuel the city’s organic and grassroots arts movement.

The behind-the-scenes odyssey of this group is a story of civic duty at personal and financial expense: In their estimation, the city has not done enough over the years to create an arts and entertainment scene for an increasingly younger population. So, they’re doing it themselves.

“I’m from Broward, born and raised, and when I moved to downtown Fort Lauderdale, I found I had to go to Miami and West Palm Beach to do cool things,” says Evan Snow, co-founder of Art Fort Lauderdale. “I came to find out there were cool things going on here, but you had to search to find them. People said, ‘You always do cool things. You should do something with it.’ ”

Snow’s visit to Memphis two years ago has had a catalytic effect on Fort Lauderdale culture. He has patterned the #choose954 cultural movement after Memphis’s #choose901, which promotes the Tennessee city as “the place to enjoy and invest in your life.”

Ever since, Snow has dedicated himself to creating a model for this region, financing his commitment by driving for Uber and Lyft and, now, through a full-time job, after which he spends his evenings hosting, promoting and live-streaming events across Broward County.

Along with his business partner, advertising executive Andrew Martineau, Snow is moving into unchartered territory. In 2017, they spearheaded the inaugural Art Fort Lauderdale, the city’s four-day art fair, which attracted 700 people. Nearly three times as many attended last year, and 3,000 people are expected this month, Jan. 24-27. This year’s edition will transport people via water taxi to art exhibits featuring local artists’ work on display in vacant and for-sale mansions along the Intracoastal Waterway.

“Honestly, it’s so unique. It’s my favorite art fair,” says Sunrise resident Paola Gracey, an artist whose bright and linear images reflect her work as a chemist. “It’s been good for me as an artist. I didn’t sell anything at Art Basel” in 2017, she notes.

Given that a portion of Art Fort Lauderdale attendees also are looking to buy real estate, people bring money, says Gracey, who sold four pieces and one commission last year. 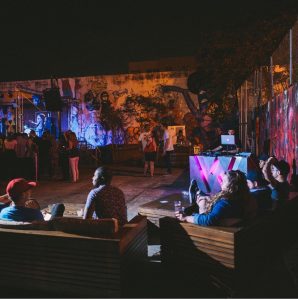 Snow and Martineau also are instrumental in raising community support for 1,000 Mermaids, an arts and coral reef conservation project led by artists Sierra Rasberry and Ernest Vasquez, who moved here in 2013 from Louisiana. The couple specifically chose Fort Lauderdale for what it offered, and what it did not, in relation to surrounding communities. They felt they were 15 years too late for Miami’s art scene and deemed Hollywood’s potential too small. But when they visited the FATVillage art walk, they found their tribe. “It was our opportunity to get into a city that had not developed a full underground art culture,” Vasquez says.

Owners of sculpture company Miami Body Cast, Rasberry and Vasquez have embarked on a plan to create an artificial reef of 1,000 “mermaids” they will sink in 40 feet of water off the coast of Sunrise Boulevard and Hugh Taylor Birch State Park. The county’s Environmental Protection and Growth Management Department has granted them permission to create the multipart structure using steel and limestone-based concrete.

Although the project has put a dent in their finances and tested their relationship, a 50-year plan to see a flourishing reef keeps them strong. “Now that we’re awake to it, we can’t not do it. I’d hate myself,” Vasquez says.

With 17 mermaid modules completed, they are seeking funding from individuals who want to have their body casts memorialized under the sea, as well as organizations and businesses wanting to build an environmentally conscious reputation. Also partnering with research institutions, the marine industry and dive shops, they hope to raise the community’s environmental consciousness while serving as a model for coastal cities around the world.

“The purpose of an artificial reef is to take dive traffic off a natural reef,” Vasquez says, noting that coral reefs are at the base of the oceanic food chain, and where most marine life lives. “First-time divers do the most damage to natural reefs. They hit the sand bottom and stir up a lot of stuff. Artificial reefs will pull people from there; [we see the] sculpture garden becoming a destination for divers.”

Over tea in their living room, Rasberry praised the heavy lifting of another artist: Stephanie Leyden.

Leyden has emerged as the fairy godmother of MASS District, which encompasses a swath of the city between Sunrise and Broward boulevards (to the north and south) and Federal Highway and Avenue of the Arts (to the east and west). Having moved here from the Bahamas with few resources, Leyden eventually was able to afford inexpensive studio space on Northeast Fourth Avenue in 2015. At the time, she says, the street was “spooky with crack addicts on it.”

But she forged ahead by founding the gallery Art Attack and leading a group of citizens committed to developing the area. She provided the name: Music and Art South of Sunrise. Today, MASS is blossoming with several galleries and The Great Project, which provides an artist-in-residence program in the same building as Tula Bistro.

Over in historic Sistrunk, another entrepreneurial visionary is busy offering a different creative avenue. Writer Darius Daughtry is founder and artistic director at Art Prevails Project, a performance and literary nonprofit organization that affords storytellers, poets, dancers and singers a monthly platform to express themselves. The group’s last show explored a theme of community violence. Art Prevails is funded by the city’s housing authority, the Community Foundation of Broward, and one of many grants awarded each year by Broward County Cultural Division.

Highly complementary of the cultural division, Daughtry nevertheless argues that governmental entities lack the “collective energy” of other cities. Sharing the same mindset as his peers, he argues the arts become even more critical as the area focuses on attracting businesses.

“What are their employees going to do when they’re not at work?” he says. “After you’re 30, you’re not necessarily going to want to be at a club every night. If the powers that be were smart, they’d be ahead of the curve.”

Having led this crusade for years, FATVillage’s McCraw recently hosted a meeting of the Broward County Cultural Council. He recalls saying: “There’s this challenge of branding within the city. You’ve got some powerful and meaningful things happening in the arts, but there’s not a collective perspective of who we are. And it’s a big whodunit. There is a missing perspective of what this area can be.”

Miami, on the other hand, “is doing a very, very effective job and putting lots of money into it. So is Palm Beach, and we’re still trying to decide who we are,” he says. “It goes back to vision and leadership. We certainly could use more.”

“As commissioner, my role back then was to bring attention to what was going on in that part of downtown Fort Lauderdale,” Trantalis says. “We participated in those events to the extent that we provided permits to close the streets down and to undertake a lively street scene. We were very pleased that so many people within our city had an interest in creating a multimedia art district.”

He also notes that MASS and FATVillage did receive community redevelopment money. “They can no longer rely on those funds because economic activity is taking place, and now there is a focus on areas of greater need.”

The mayor says the city is purposely not following Miami’s model, where “collector artists are flown in from around the world” for Art Basel. Instead, he says, Fort Lauderdale’s “slow-growing” and “organic” art scene showcases local artists. “It’s much more exciting that they live here, and they create here,” he says. “That shows we have a strong underpinning for the future art component in our downtown.” 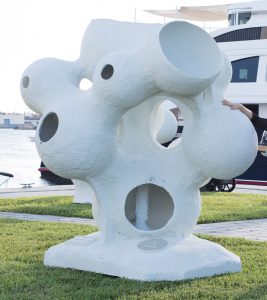 A “reef module,” part of the 1,000 Mermaids arts and coral reef conservation project

For her part, Leyden isn’t looking to the distant future. Instead, she’s worried that grassroots efforts to resurrect blighted communities could be exploited by big business and retailers appealing to an affluent class.

“With all our work and sweat, we are finally getting people to recognize us,” she says. “I’m praying to the arts gods that they leave our little streets alone.” 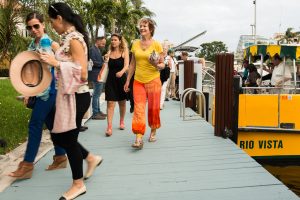 What: Fort Lauderdale Art & Design Week reflects a grassroots desire to unite artists and cultural institutions, with the ultimate goal of establishing Fort Lauderdale as a thriving and creative place to live and an international tourist destination. Art Fort Lauderdale, known as the “Art Fair on the Water,” is the centerpiece of Art & Design Week. Via water taxi you’ll be transported to mansions along the Intracoastal Waterway, offering the unique occasion to view and buy work by local artists. Where else can you view art in some of the most glorious homes in the world? Exactly.