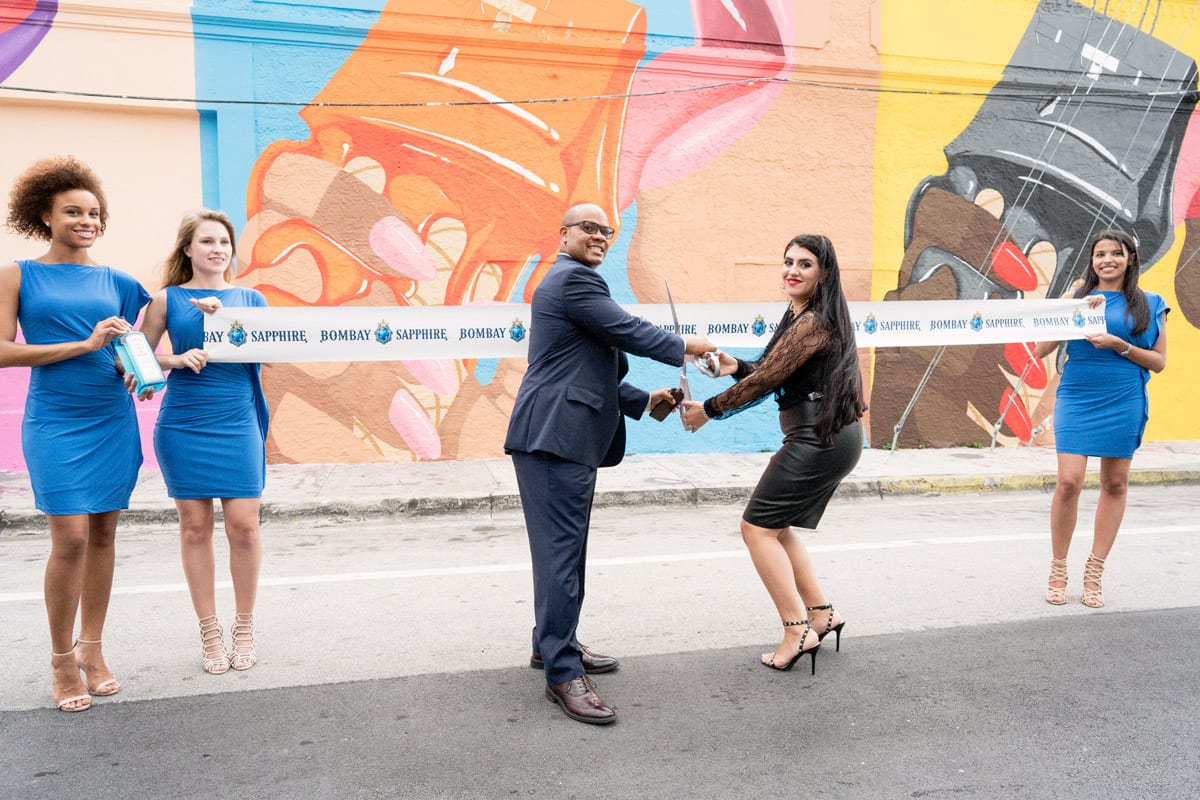 Good to the Last Drop

When Becky Rosa sees an image of Winnie-the-Pooh, she doesn’t think about the teddy bear and his friends having adventures in the Hundred Acre Wood. She obsesses over what’s really in Pooh’s “hunny” jar.

The London-born artist and clothing designer shares this aside toward the end of a candid interview on a bench outside of Panther Coffee in the Wynwood district of Miami. The observation doesn’t unravel the meaning behind the three-panel wall mural directly across the street, an installation that Rosa painted last May featuring a staple of her recent artwork—an Hermès Birkin bag melting over an ice cream cone.

Nor does it clarify why Moët Hennessy filed a cease and desist order against her over a T-shirt she conceptualized.

But it goes a long way toward explaining the international buzz surrounding Rosa’s creative ventures over the past four years, projects fueled by everything from a failed romance to her fascination with capitalism.

“I love pushing buttons,” Rosa says in her disarming British accent. “Not in a vindictive, annoying way. It’s just interesting to get people going.”

That she would push all the right buttons as an artist before age 30 comes as no surprise to the woman born Becky Rosa Chesneau. She’s “always had faith that things would work out” even though hers certainly is the road less traveled.

After graduating high school in England, Rosa vacationed in South Florida with her mom, a flamboyant spirit who suggested that her daughter stay in the United States. At age 16. “I don’t know if she was trying to get rid of me, but I was like, why not,” Rosa quips. “She got me a dog and an apartment on South Beach. I cried for a few months because I was alone, but I came to feel that I had been set free. It was my opportunity to discover who I was.”

Over the next several years, Rosa took courses related to advertising and art direction but ultimately dropped out of two different specialty colleges. It became part of a pattern—an inability to reach the finish line with a project or goal—that gnawed at her. That is, until she broke up with a boyfriend at the end of 2012.

“The next year, I re-evaluated everything,” she says. “School never really worked for me, but it took going through those rounds of creativity to figure out how I wanted to express myself. I had ideas, but I needed to follow through on one thing.”

That one thing became BRC Street Couture, an online and vendor-driven clothing line that offered early insights into the artwork that would soon follow. Intrigued by satirical word play and pop culture, Rosa began to manipulate high-end brands and logos in order to blur the lines between urban and luxury lifestyles.

She borrows the Louis Vuitton font for a T-shirt emblazoned with “BitchesBeTrippin.” A “Burnana” sweater recalls Burberry, except with a half-peeled plaid banana. The word “Habibi,” which means “my beloved” in Arabic, replaces Hermès on a logo that also features a carriage drawn by a camel instead of a horse—a Rosa design that remains her top-seller in the Middle East.

With a wink and a nod to Miami’s nightclub scene, Rosa also spun Moët & Chandon’s Champagne logo into “Moët & Cocaine,” a concept that prompted legal action from corporate entity Moët Hennessy.
“They shut down my website because of that design,” Rosa says. “So I moved my server out of the country so no one could touch it.”

Rosa with the “Birkream” sculpture she made for Miami plastic surgeon Jhonny Salomon.

The success of the provocative clothing concepts (and the revenue it generated) gave Rosa the confidence to dive into the artistic deep end and try something completely different. The melting Hermès handbag on an ice cream cone, originally conceived for a T-shirt, became the inspiration for a 6-foot-tall resin and fiberglass sculpture finished with high-gloss automotive paint.

Last December, her “Birkream” series earned a People’s Choice award at the Bombay Sapphire Artisan Series during Art Basel Miami Beach. Bombay Sapphire then invited Rosa to contribute a public installation to Wynwood; it took her the better part of four weeks to paint the wall mural titled “Expensive Taste.”

“Consumerism is a huge part of my work,” Rosa says. “There’s a side of me that feels that the handbag is too over-the-top and expensive. But I also realize that it’s beautiful. It’s hand-stitched; an artist worked on this for hours and hours. Craftsmanship is something I value greatly, especially in an era where there are so few hands-on, manmade products. So the sculpture can be taken both ways.”

Rosa understands that her aesthetic isn’t for everyone—even though she’s fetching upward of $18,000 for her exclusive sculptures (each one incorporates different Pantone colors). While working on the mural, she says, a stranger tore into her, suggesting that Wynwood doesn’t like her artwork.

“I told him, ‘Look, I’m sorry I’m not painting another animal or another lady with wide eyes and big lips,’” says Rosa, who will be at Scope Miami Beach (Nov. 29–Dec. 4, scope-art.com) during Basel week with Avant Gallery. “I’m not the typical artist. I think very big, and I always try to be evolving.

“That’s the American side of me. I definitely have an American soul. … I love this country; it’s given me so much happiness—and I want to give back.”