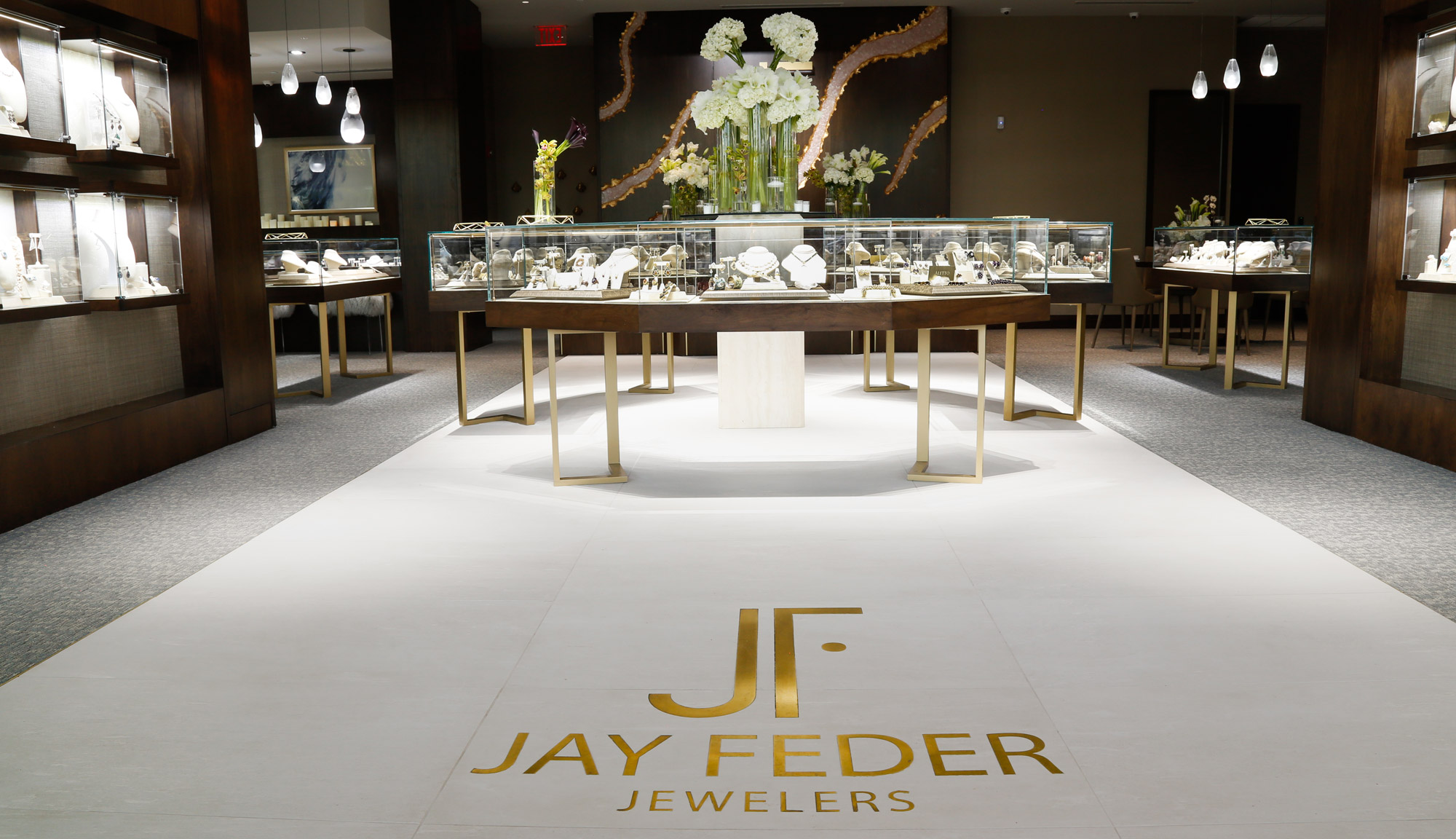 The Unicorn and the Wizard: A husband and wife team combine their talents at Jay Feder Jewelers

The open showroom at Jay Feder Jewelers in Boca Raton smells like lavender, with crystals hanging from the ceiling and more than 30 seahorses lingering inside a 300-gallon saltwater tank. The pieces for sale are as exquisite as the store design, yet the atmosphere feels warm and familiar.

Aptly described as a hybrid between an art gallery and a living room, it feels different than other jewelry stores. But that’s because Marc and Devorah Feder intended it that way.

The experience revolves around their personal touches—from the pieces they curate to the snacks they serve to the acrylic painting by 12-year-old Max, one of their four children, that hangs on the wall.

Jay Feder Jewelers opened its South Florida location within The Boardwalk of Boca Raton plaza in October 2017. The space, at more than 4,000 square feet, is the couple’s third branch of the brand—with the flagship store in Denver and another outlet in New York.

“We came to Florida for a weekend, and we decided we’re crazy for living in New York,” Devorah says. “We came in May of 2015 and, by August, we had a house.”

For a while, they were doing business out of their house, taking phone calls from the driveway. But soon, they found The Boardwalk and built the space from the ground up—something they didn’t get to do with their previous locations.

“Devorah had a vision,” Marc says. “She built it in spite of what people told her. We want people to come in here because they want to be here. The business comes on its own.”

For Marc, jewelry is in his blood: Jay Feder is named after his father, who started the company in Denver in 1978. A favorite family anecdote is that as a kid, Marc took a 4-carat diamond to school for show-and-tell. He eventually took over the company in 2009 when he was 31.

“Marc is an expert of diamonds, but Devorah, she’s the design guru,” says Kevin Ray, manager of the Boca Raton location. “Her attention to detail is impeccable.”

Marc agrees. He calls his wife “the unicorn” for her bubbly personality, while Devorah calls him “the wizard” for his diamond knowledge.

“All of Devorah’s best talents are highlighted in this business,” Marc gushes over his wife of 18 years. “She makes decisions quickly, and she’s so confident. Watching her do that, I’m not only just proud, but it’s amazing. I think we took a whole other step forward in our marriage.”

Ray motions toward a set of fluffy stools that adorn a case full of rings and wedding bands. “Devorah designed the fluffy stools,” he says. “She researched what the place should smell like for months.”

She and Marc invest similar attention to detail in the jewelry they sell. The shop features about a dozen up-and-coming designers in addition to custom work and redesigns. Prices span from the hundreds to hundreds of thousands, with each piece hand-selected by the couple. Some of the designers that Jay Feder initially featured have since been picked up by larger retailers, like Bergdorf Goodman.

“We want this to be obtainable luxury for everyone,” Marc says.

The Boca Raton location features a TV lounge area that’s often used by men while their wives shop, or by kids as their parents browse. A stocked bar includes beer, wine, cappuccino and plenty of custom snacks. A bowl with brass handles carries stacks of individually wrapped sugar cookies decorated to look like amethyst quartz and embossed with Jay Feder’s signature logo—a question mark to represent the tagline “Who’s Your Jeweler?”

What started as family vacations to Boca Raton has become a new home and business location for the Feder clan, but that doesn’t mean Jay Feder locations will start popping up like hamburger restaurants across South Florida. The Feders would like another location, but they know it won’t be here.

“I like to say I have four kids, so I want four locations,” Devorah starts before Marc jumps in with a more pragmatic response.

“I’m obsessed with client relations,” he notes. “Once we do that, the growth can keep going.”

But all the pragmatism in the world can’t cut off Devorah’s two large cups of coffee’s worth of excitement. “We want to get this location under control,” she starts. “And then, we want to be all over the country.”