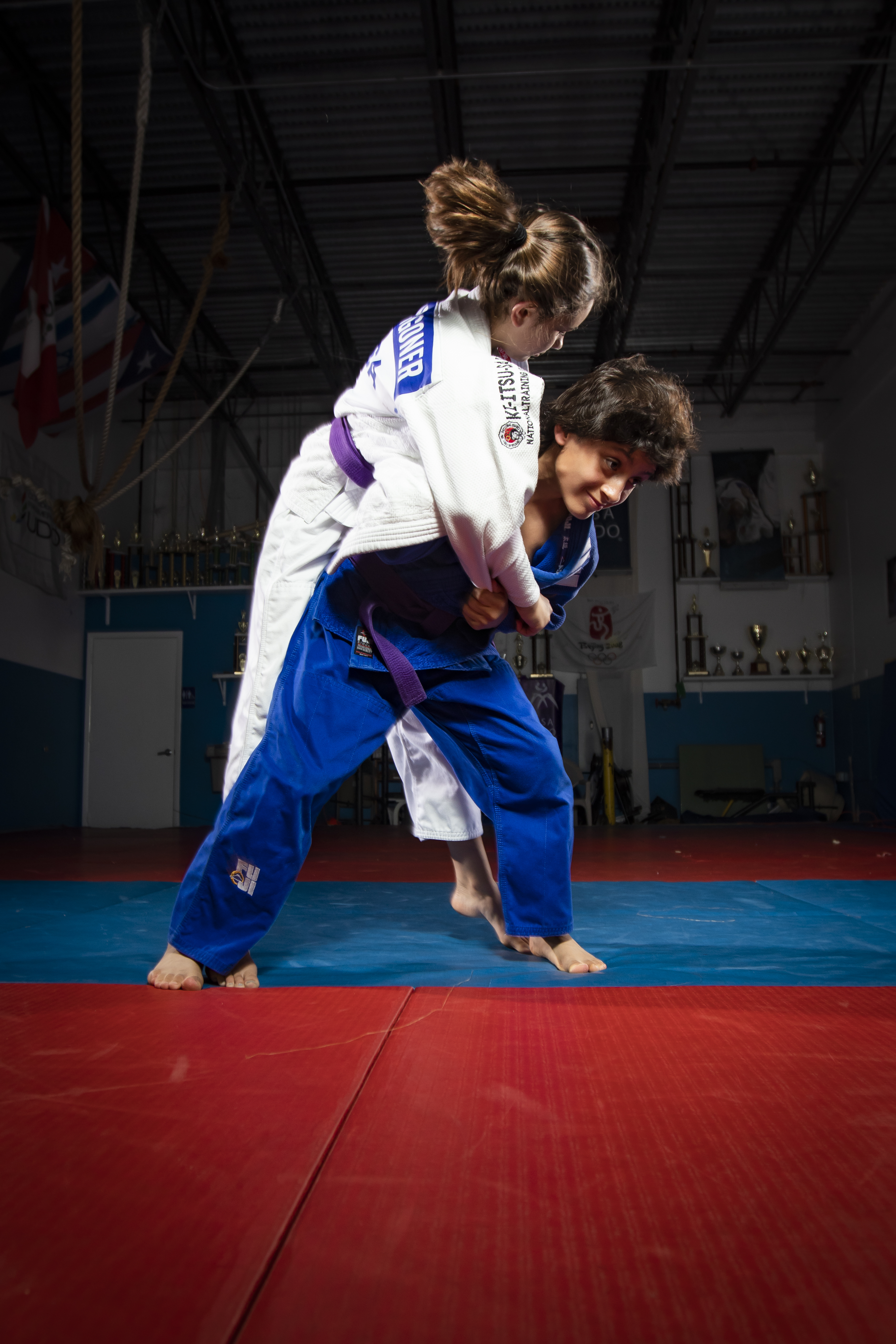 Though Jhonny Prado admits he doesn’t like tattoos, a lift of his right shirt sleeve reveals the familiar Olympic rings and the year 2012 etched on his skin. It’s a reminder of the time he went to the 2012 Summer Olympics as an assistant coach for the United States’ judo team.

“It’s a different thing to hear about the Olympics [than to be] part of the Olympics,” Prado says of the London Games, which made up for having to miss a coaching opportunity at the Beijing Games in 2008. “It’s an experience of a lifetime.”

Prado, certified as an international gold coach for USA Judo, the sport’s governing body in the United States, isn’t the only one who’s lived the thrill of competition. His brother-in-law, German Velazco, competed for Peru in the 2000 Olympics in Sydney and placed seventh in the World Championships in 2001.

The determination that took them both to the global stage is what they impart to students at Ki-Itsu-Sai National Training Center in Coconut Creek. One of four training centers in the country designated by USA Judo (the others are in Boston, Colorado Springs and San Jose, California), it is the home training base for Team USA members Angelica Delgado, who competed in the 2016 Olympics in Rio de Janeiro, and Adonis Diaz and Ryan Vargas.

For Prado, who also coached at the Rio games, the center is the result of years of working to make it in the United States after immigrating from Lima, Peru, when he was 19. He and his siblings were involved in the martial arts discipline that emphasizes takedowns and grappling maneuvers as children, but, when he came to the States, he put his passion for the sport aside to focus on making a life for himself. His brother, Julian, however, took Prado’s son to judo lessons. When they watched a competition his son was involved in, Prado was unsatisfied with the quality of training. He thought, “We can do better than that” and started holding informal training sessions in his garage at his Coconut Creek home around 1999.

Soon, the lessons became so popular that they outgrew the space. Prado moved the center to locations in North Miami, North Lauderdale and Coral Springs. In the meantime, they gained traction. Both of Prado’s children (Veronica and Joshua) started placing in national competitions around 2001, and other athletes earned spots on the USA team. In 2004, Prado became a coach for the national team and traveled with judo athletes from around the country.

In 2012, they moved Ki-Itsu-Sai to Coconut Creek, in Lyons Business Park at 6855 Lyons Technology Circle, Suite 9. Prado says the center has grown at the Coconut Creek location, which is a hub for athletes from around South Florida and Latin America, who train there regularly.

There, after putting in a day’s work at their full-time jobs—Prado owns Prado Tile, Marble and Granite, and Velazco is a code enforcement officer for Miami-Dade County—the Coral Springs residents oversee the 70 or so students who train from 5:30 to 9 p.m. on weekdays. Around 5:30, parents watch as Velazco and other black belts (including Julian) guide younger students through drills. Later in the evening, adult athletes keep Prado and Velazco busy.

The long hours produce world-class athletes, not the least of whom are members of the Prado family, as shown by their victories in their respective age and weight categories. Prado’s niece, Giovanna, placed third in the Pan American Open in 2016 and second in the Youth National Championships this year. Her brother, Alexander, placed first in the same competition and is ranked first nationally. Velazco’s son, Christopher, won gold at the 2016 Infantile Pan American Championships.

Seeing athletes on podiums and moving up in the rankings is what makes the long hours worth it for Prado.

Family First
Prado and Velazco emphasize the importance of family, reflected in the way parents interact while watching their children on a typical weekday at the center. In fact, the name of the center is a Japanese phrase Prado learned from his sensei (teacher) in Peru: it essentially means “always united” and reflects Velazco’s philosophy that “the only way to be successful in life is together.”

“In judo, you compete alone, but you don’t train alone,” Velazco says. “If you don’t have the complete chemistry between parents, coaches and athletes, something is missing—you can’t reach the objective. That is why I talk with the parents. I say, ‘Support them. Be there for them.’ When they understand that they have people that support and care, they’ll be stronger.”

Someone who has experienced this family support firsthand is Carla Guevara, who credits the Ki-Itsu-Sai family with changing the course of her son’s life. About a year ago, the Coconut Creek resident decided to look for a place where her son, Michael, 12, could learn martial arts. He was being bullied at school, and Carla was worried he needed more social interaction. She met the father of Angelica Delgado, who helps with training at Ki-Itsu-Sai. She loved the family environment and the discipline Michael learned from Velazco.

Before, she says, Michael would spend hours in front of a screen. Now, he splits his time between homework and judo practice and is a yellow belt. Guevara has registered Michael with USA Judo so he can gain points as he competes that might qualify him for a future Olympics should he choose to pursue it. Guevara describes his change as “overwhelming,” a journey recently capped off by his recent victory at the Florida Open Judo Championships.

“He cried. He was so happy,” Guevera says. “We cried because we were shocked. … He went from a kid who had no social skills to a kid who won his first medal. …We are so overwhelmed with how much he’s changed and how he came out of his shell.”

Give and Take
Michael’s story, among others, is a reflection of what Velazco emphasizes as a coach: valuing education, being a good citizen, having respect and working hard. The hard work is clearly shown in the array of trophies at the center and in their athletes’ standings. Earlier this year, Delgado, Diaz and Vargas all earned medals for the U.S. at the Pan American Senior Championships in Costa Rica, and they continue to compete around the world. At press time, Delgado was ranked 12th internationally, Diaz 22nd and Vargas 31st in their respective divisions and weight classes.

Beyond the hard work, Prado and Velazco support the athletes’ life goals as well.

This approach to training has earned the love and respect of parents and supporters. Recently, they held a fundraiser to buy a new mat for the center. Parents raised more than the $6,000 needed even before the date of the fundraiser. After the fundraiser, the final total was more than $8,500.

Prado was touched by the vocal support. “It’s not about me or German,” he says. “It’s always about the name of the club and the kids.”