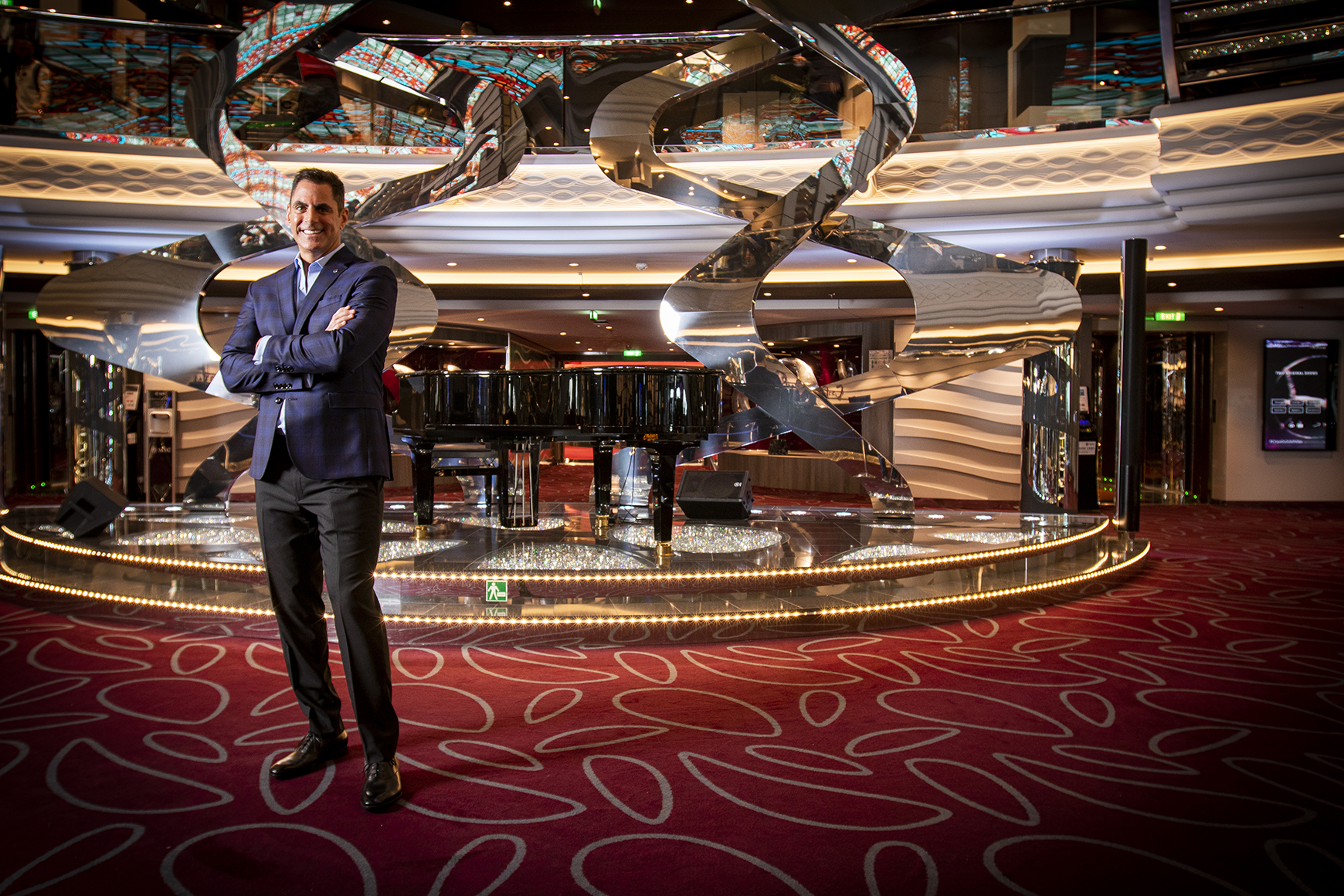 The Super Bowl isn’t the only reason travelers are heading to South Florida. MSC, riding one of the industry’s most ambitious waves of expansion, is solidifying our region’s standing as the country’s cruise capital. Ken Muskat, COO of MSC, expounds on the connection. 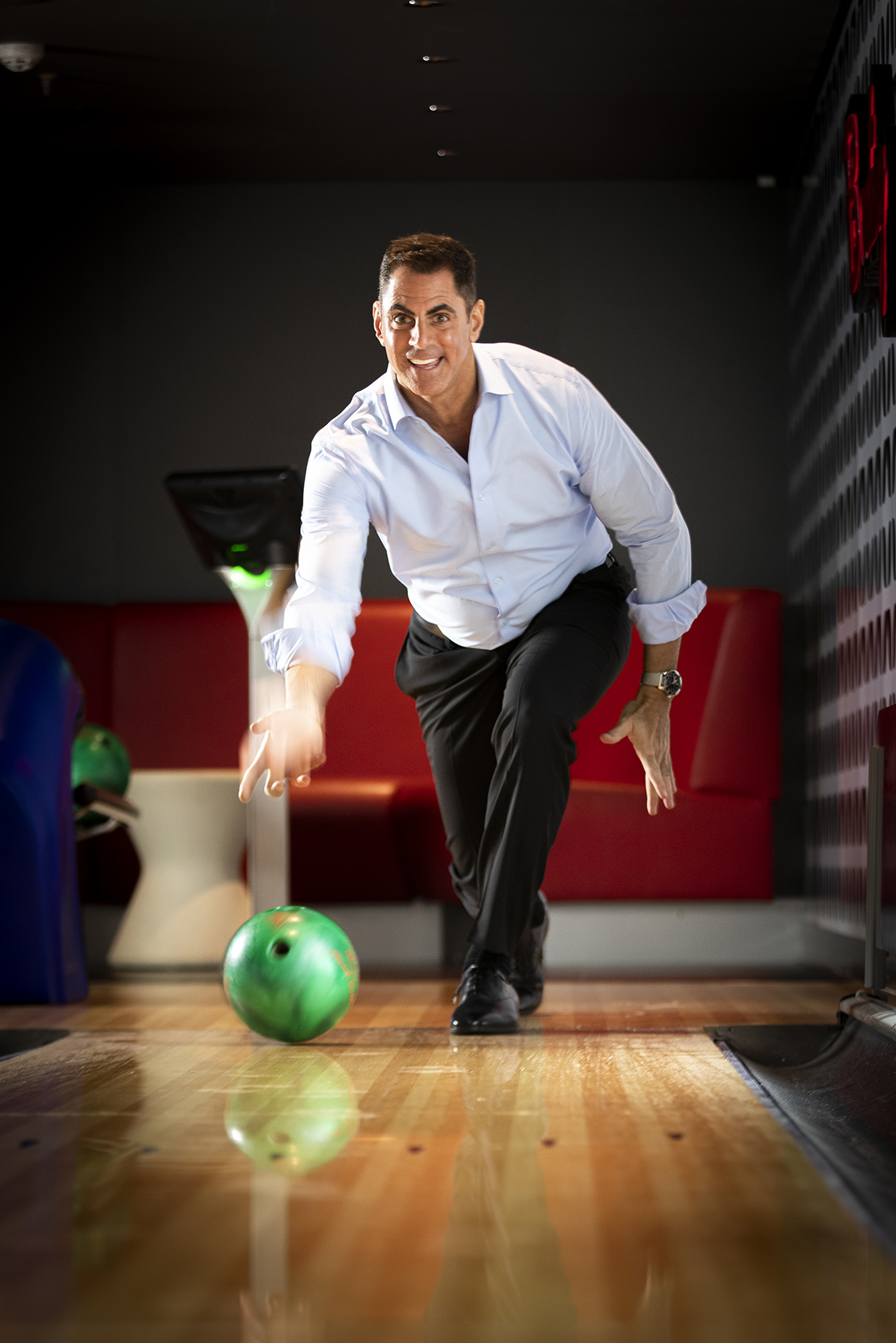 For Ken Muskat, coming full circle in his career as a cruise industry executive meant first traveling halfway around the world. After a nearly four-year run at MSC Cruises (USA) that earned him the title of executive vice president, he signed a two-year agreement in 2017 to become CEO of SkySea Cruise Line in China.

Though the brand found niche success in a burgeoning market, SkySea only had one ship. Eventually, that ship was sold to another cruise line—leaving Muskat to close down the brand while helping to find jobs for his employees and crew, which he did.

In the meantime, MSC was busy preparing the Miami native an offer that Muskat couldn’t (and wouldn’t) refuse—an even larger role at a cruise line that already was embarking on one of the most aggressive expansions in industry history.

“It was too exciting to pass up,” says Muskat, who was named chief operating officer and executive vice president last January.

The $12.7 billion plan that MSC kicked off in 2017 not only is reimagining the European-based brand (which has its U.S. headquarters, for now, in Fort Lauderdale), but it’s also changing the economic landscape in South Florida—thanks, in part, to a recently signed deal that will add two mega cruise terminals to PortMiami. The $300 million project is scheduled for completion by October 2022.

Though Super Bowl LIV will be the biggest game in town on Feb. 2 (at Hard Rock Stadium), it’s the cruise industry, led by MSC, that continues to make some of the biggest waves in our region. That’s why Lifestyle asked Muskat to welcome travelers to South Florida’s first Super Bowl since 2010.

He spoke to Lifestyle about how the region has evolved, the cruise industry’s connection to our area, MSC’s footprint, and much more.

It’s been a decade since the Super Bowl has been in Miami. In what ways has the region most changed in those 10 years?

The biggest change, for me, is the cultural aspect of South Florida. Ten years ago, Wynwood wasn’t what it is now, we didn’t have the Design District, we didn’t have Midtown. You couldn’t even walk safely in much of downtown Miami.

Now, in [both Broward and Miami-Dade counties], we have world-renowned chefs opening restaurants; we have areas, like Wynwood, that are unique; and we have [other pockets] so enriched by culture and art. We almost don’t even talk about the beaches as much as the shopping and restaurants and multicultural experiences around our cities.

There also are office buildings and residential buildings popping up all over that make it easier for people to live and work in close proximity—and even bike or walk to places, which we should be doing in an area that has such amazing weather. That definitely didn’t exist 10 years ago. 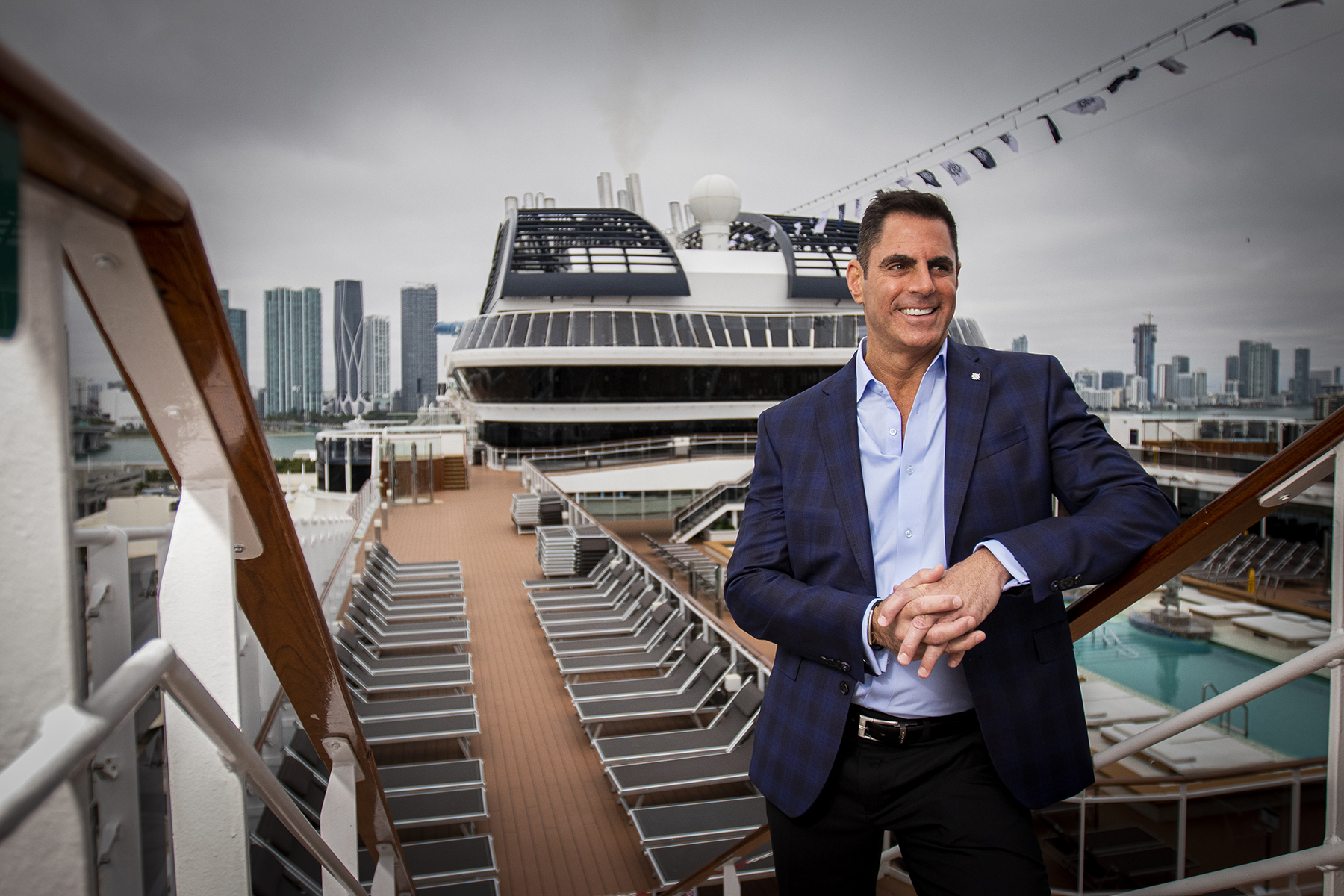 What do you think makes South Florida so attractive as a place to base your business?

Just the proximity of all the things you can do, along with the multitude of housing choices. If you live in Miami, you don’t have to pay for the most expensive apartment in the world, like you would if you lived in the center of Manhattan. There are areas developing affordable housing, because so many businesses are moving into downtown Miami and Fort Lauderdale.

So, you can live in this area that’s multicultural, that has all four major sports, that’s a hub for fashion and dining and events—and that’s also affordable. It provides that work-life balance that so many people seek.

The cruise industry is woven into the fabric of this region. What are some ways that the industry influences South Florida business?

Between Port Everglades and PortMiami, we’re talking about millions and millions of passengers coming to South Florida on an annual basis. And they’re not just arriving at the airport and going straight to the ship. They’re typically staying for a day or more before, staying for a day or more after. So, the cruise industry is bringing a pre- and post-experience to South Florida that impacts the local economy.

PortMiami, for example, is bringing thousands of passengers almost on a daily basis to Bayside and downtown Miami. And they’re spending money—they’re shopping, they’re going to lunch and dinner. … I don’t know how many passengers PortMiami was turning 10 years ago, but it’s nothing like the 5.5 million [annually] that they’re doing today. All of this is great for everything South Florida has to offer.

In September, the Miami-Dade Board of County Commissioners approved the final contract for two mammoth MSC terminals at PortMiami. Can you talk about the impact of such a deal to the local economy?

You’re also building a terminal that holds two ships, up to 7,000 people each, that can turn at the same time. That gives you the ability to turn 28,000 people—14,000 departing the ship, 14,000 people boarding—in a single day. That requires significant staffing at the terminal—and [thus creates] more jobs.

How does the PortMiami deal play into MSC’s long-term strategy? 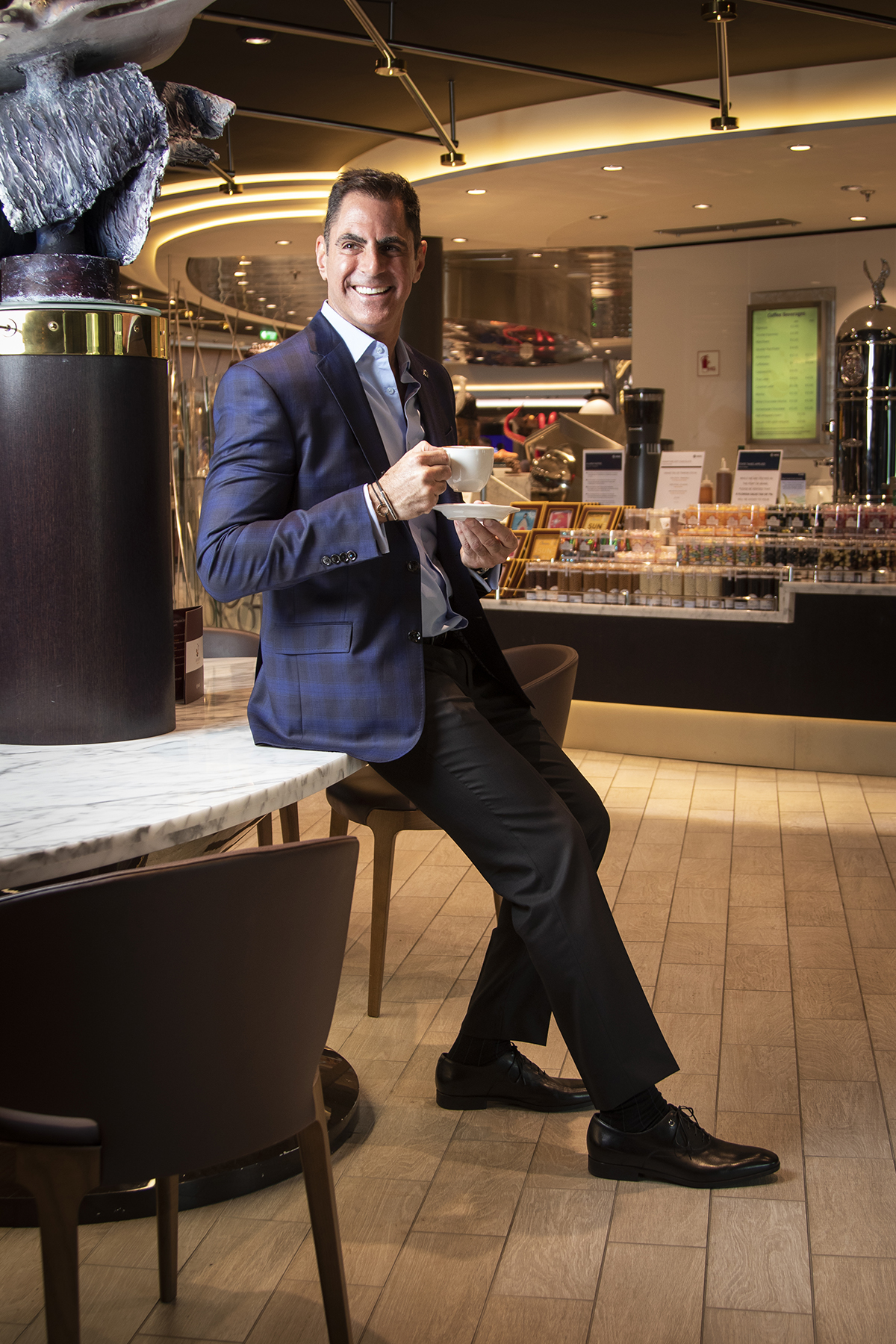 By 2027, the number of MSC ships will double—and the guest capacity will triple. Why is this window the right time for such an ambitious expansion?

At one point, the company had to decide—do we want to do this in the U.S. as a hobby? Or do we really want to be competitive? We’re already the biggest player in Europe and South America, so North America was the focus. And we decided that we’re going to grow. We’re currently the fastest-growing cruise line in the world and the fourth-largest in the world.

What also drove it is that cruise-guest satisfaction is so high, and cruising is so under-penetrated. We’re still standing in the low-20-percent range when it comes to people in the U.S. who’ve taken a cruise. The opportunities are mind-boggling. Better still, once you do go on a cruise, it’s about a 97 percent satisfaction rate. So, the repeat rate is going up and up. That’s what is driving us to go big and go bold.

We know that MSC is building some of the largest, most-innovative, most-technologically advanced, and most-environmentally sound ships in the industry. We want to be a big player for people who’ve never cruised or people who have cruised but want to try this new kid on the block. That’s why we’re committed to this $12.7 billion new-build program—with more to come.

What distinguishes the MSC expansion?

We were born in Europe, and we’re headquartered in Europe; MSC is the only true mass-market brand, in the size that we’re talking about, that has this European heritage.

We have these big, beautiful ships that travel to 200 different destinations (and counting). The ships are super-modern and high-tech, and they carry 5,000 to 7,000 people—representing some 180 nationalities at any given time. So, we’re bringing people from all over the world together on our ships.

On board, we differentiate by the experiences offered, like the Michelin-star and celebrity chefs we work with, or entertainment partnerships like Cirque du Soleil.

We partnered with Martha Stewart because we want to offer things that are off the beaten path. We don’t want to go to Jamaica and offer a shore excursion where you go to a farm and have a lunch. With the Martha Stewart partnership, you go to the farm and learn from the person running it; you’re picking the vegetables; you’re going into their kitchen and cooking the food; and then you’re sitting at their dining table and having lunch.

We want people on an MSC cruise to say, “That was unexpected.” People love feeling valued, even on vacation. We feel that we provide that in a unique way.

Shot on location aboard the MSC Meraviglia at Port Miami 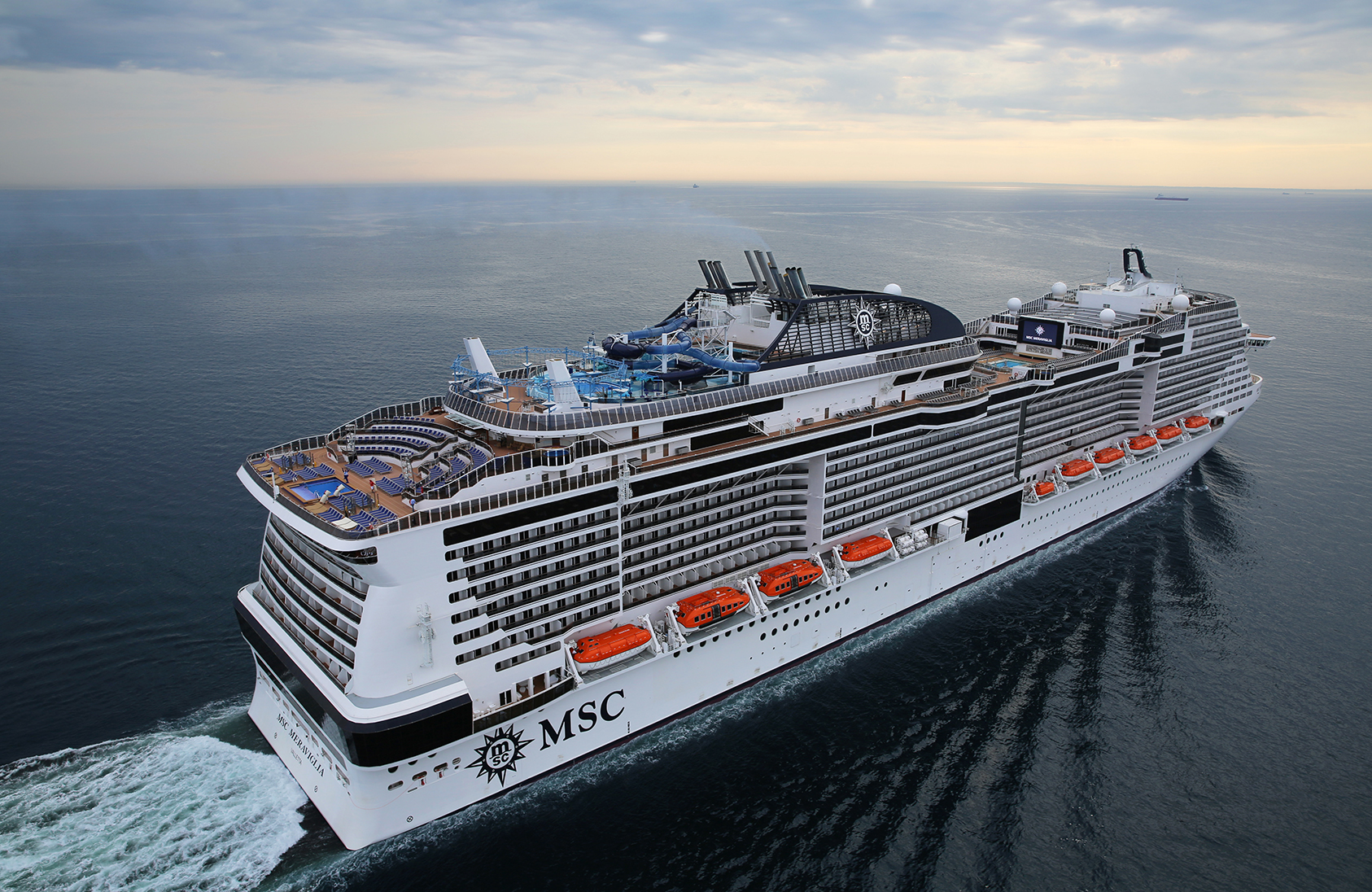 For now, the Meraviglia is the largest ship in MSC’s fleet to operate out of the United States. But it might not own that designation for long. The state-of-the-art ship—which entered service in 2017 with 19 decks, a two-story Mediterranean-style promenade, an endless array of shops, entertainment and specialty restaurants, and a capacity of some 4,500 passengers—is only a hint of what’s to come at MSC.

The 10-year, $12.7 billion investment plan that MSC launched a few years ago will more than double its fleet to 25 ships by 2027—and its passenger potential to more than 5 million people annually.

Included in the expansion is a division of three eco-conscious ships under the Meraviglia-Plus banner. In late October, MSC took delivery of the first of those ships—Grandiosa, a 181,000-ton environmental marvel with an energy-efficient hull and straight bow, and cutting-edge technology to guarantee cleaner air emissions.

Ken Muskat spent two years in Shanghai as CEO of SkySea Cruise Line before returning to MSC Cruises last January. The COO—whose day-to-day duties with MSC include everything from sales to revenue management to marketing and messaging—shares some of what the experience of living in China taught him.

“From a business standpoint, Chinese culture is so different than the way we operate in the U.S. There’s a joke in China that contract negotiations begin after the contract is signed. And it’s true. You think you’ve come to an agreement, and then it’s constant renegotiating. I learned a lot about how to negotiate and how to handle that ongoing process.”

“My bigger takeaway involved personal development. I put myself in a position where I was super outside of my comfort zone, thrown into a situation I had never been in before. And I was very alone doing it. Going through that struggle of adjusting—and then coming out the other side, where it was the best experience of my life—was incredibly rewarding. I encourage people all the time now to do something that challenges their comfort zones. It’s amazing what your mind and body can handle when your choices are make it work or quit.”