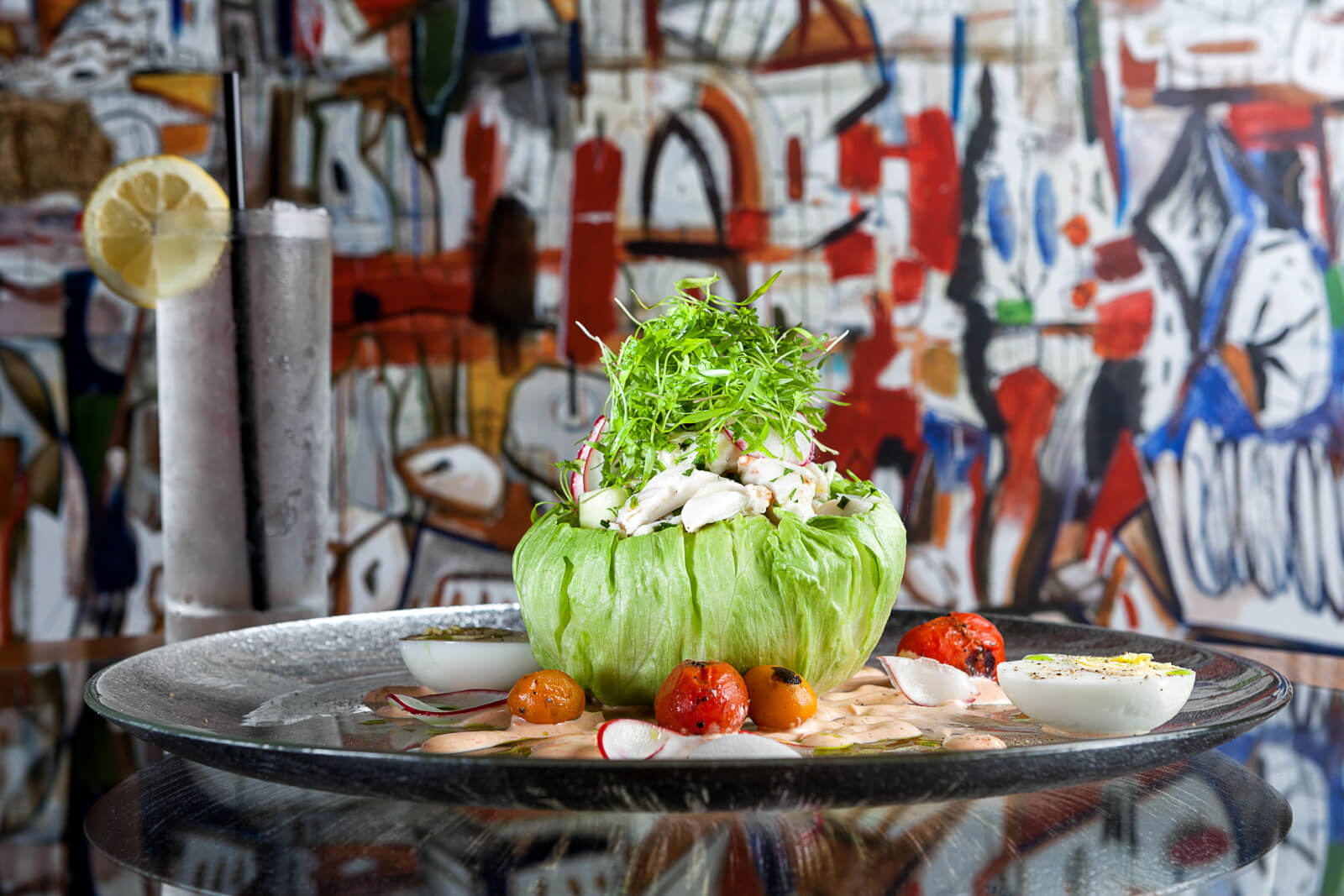 Get in the Spirit: Thanks to Old School Hospitality partners Paul Flanigan, and Frank and Kimberly Zaffere, Fort Lauderdale’s Victoria Park has the kind of retro-hip neighborhood hangout that can send spirits soaring for a variety of reasons. The vibe at Good Spirits Fifth & Fed (476 N. Federal Highway) is crooner-cool, the kind of place Frank and Dean would have appreciated; the lounge area is festive, serving 75 wines from around the world, not to mention craft beers and classic cocktails. And the casual American fare, courtesy of executive chefs Chang “Sushi Mike” Jin and Joseph Parsons, is inspired—like the not-to-be-missed So-Flo scallops (with honey-lime mint slaw and avocado relish) and crab Louie (with monster chunks of lump crab; pictured above). Check out goodspiritsrestaurant.com for the full menu.

Two (or more) if by sea: Pompano Beach is providing water taxi service, connecting the city to Lighthouse Point in the north and Fort Lauderdale in the south. The Island Girl and Big Diamond seat 40 passengers each and run daily from 10 a.m. to 10 p.m. The service currently makes 11 stops on the Intracoastal Waterway, including Cap’s Place. Visit pompanobeachwatertaxi.com.

You, too, can YouTube: Founded by frustrated father Dominic Giannetti, who couldn’t locate a school for his two young daughters in the entertainment industry, You Create Academy’s On-Screen Acting program in Boca Raton now helps the next generation of would-be YouTube stars hone their on-camera skills and explore networking techniques to help them go viral in no time. (youcreateacademy.com)

“Escape. Travel. Live.” Such is the motto of Island Company, a lifestyle resort apparel manufacturer and retailer whose products, including its self-proclaimed “smoothest rum on the market,” are sold around the world. One of its eight freestanding locations is its high-end boutique at the Ritz-Carlton in Fort Lauderdale. Even if retirement isn’t imminent, lounging on a plush beach towel from the “Quit Your Job” collection just might be the next best thing. (islandcompany.com)

Pizza on Wheels: The first food truck from Mod Pizza is taking its show on the road in South Florida. The Modmobile serves its thin-crust artisan offerings (such as the Mad Dog with mushrooms and spicy Italian sausage) piping hot from an 800-degree, gas-fired oven. On the brick-and-mortar side, expect to see a new Mod in Pembroke Pines, joining locations in Coral Springs and Parkland. (modpizza.com)

Feel the Float: Owners Destiny and Matt Beck invite patrons to step outside their “restricted reality” and into a tank filled with 180 gallons of water mixed with 1,000 pounds of Epsom salt. The result is said to evoke a zero-gravity experience, but the Becks believe the four tanks at Float8 Wellness Lounge (616 SE 10th St., Deerfield Beach, float8ion.com) represent so much more. Destiny spoke to Lifestyle about the healing effects of floating.

What are the benefits?

It’s a powerful stress-relief and wellness tool. By removing light, sound and the effects of gravity, floaters reach a deep level of mental and physical relaxation—ideal for healing and meditation. Floating helps improve focus, reduce anxiety, relieve muscle tension and chronic pain, and lowers blood pressure. Floaters also report feelings of happiness because it stimulates the production of dopamine, serotonin and endorphins, and they often sleep better.

How does the therapy benefit pregnant women?

Expectant mothers benefit almost immediately, from the comfort of experiencing a near-zero gravity environment to stress relief, improved sleep, managing leg cramps and finding a deepened emotional connection to their child. It can also be helpful for women struggling with conception or postpartum depression.

Out in the Open: Destined to become a smash on the Fort Lauderdale restaurant scene, Etaru, featuring contemporary Japanese Robatayaki cuisine, will debut at Icon Las Olas early this summer. The robata grill, which originated with the fishermen of Japan’s northern coast who charcoal-grilled fish on their boats and shared with one another via outstretched oars, will serve as the centerpiece of the indoor-outdoor restaurant, allowing guests to witness the action as it unfolds. We’re hoping that the seasonal and premium tasting menus at the Hallandale Beach outpost make it to Lauderdale.(etarurestaurant.us)

Flower power: Floral arranging just got groovier. Modern Sixties Wine Lounge in Fort Lauderdale, pays homage to a gone-but-not-forgotten era, celebrating the tunes, the taste and the hippie spirit of the decade. Now, you can discover your inner flower child during the lounge’s bimonthly class, hosted by FloraVina, and participate as an empty vase takes root and transforms into a beautiful arrangement. (modern60s.com)

Pet-friendly yoga: The downward dog pose takes on a whole new meaning at Doga, an opportunity for pet owners to connect with the practice of yoga while incorporating perhaps the most healing influence in their lives—their furry friends. A collaboration between dog trainer Cherie Marquez and certified Kundalini yoga instructor Brian Olegario Arbalaez, the human/canine bonding begins at 9:30 a.m. on Saturdays at Donn Eisele Park in Wilton Manors. (healingpawsguru.com)

A bellyful of fun: Restaurateur Dennis Max and real estate developer Craig Menin hope to satisfy the insatiable appetites of locals in south Palm Beach County with Delray City Market, a 30,000-square foot enclosed space that perpetuates the growing trend of food halls. Some 30 vendors will offer a range of cuisine, cooking classes and guest chefs. Opening is slated for summer 2019.

Tunes at the track: Exhilarating horseracing action at Gulfstream Park gets your heart pounding, and now, as night falls, the iconic track also gets your feet moving. Every Friday this summer through Aug. 31, get your dance on at the free Twilight Concert Series, where a different performer each week delivers live music—disco, R&B, country, soul and rock. (gulfstreampark.com/twilightconcertseries)

One (or more) if by air: Surely, you’ve been warned to never trust the smile of a crocodile. But the grins elicited from introducing curious visitors to the American alligator? Now, that’s what makes “Wild Lyle” Thomas tick. Since 1963, he’s been the one leading airboat tours, commencing from Parkland, to share the outdoor wonders of the Everglades. Early-morning departures are best for optimal wildlife viewing, but daily tours depart as late as 3 p.m. (evergladesairboattours.com)

The guiltless gourmet burger: Beefy patties, special sauces and a multitude of tempting toppings—when it comes to “having it your way,” it’s easy to lose control. Headquartered in Los Angeles but hitting Weston in early July, Burgerim features sensibly sized burgers that serve as portion-controlled indulgences for the health-conscious carnivore. (burgerim.com)

The Modern Romance of Sailing: Plantation-based Virgin Voyages seeks to restore the glamour and sophistication of sea cruising. Joining forces with an array of interior designers and architects, the company aims to create alluring spaces, such as Richard’s Rooftop, a chic VIP outdoor lounge with a futuristic aesthetic that’s named for Virgin Group founder Richard Branson. The first ship is due for delivery in 2020. (virginvoyages.com)

You’ll flip for this: Lauderdale-By-the-Sea’s hip beach bar, Backflip at the Plunge Beach Hotel, is an unconventional sandy spot where a dip in the ocean or stroll on the beach is complemented by live music jam sessions and playfully named mixed drinks. (Check out “Sharkbait,” with vodka, ginger beer and raspberry puree.) Happy hour is Monday through Friday, 4-6 p.m. and 8-10 p.m. (plungebeachhotel.com)

It’s all in the wrist: Bike riding is a summer activity many of us love. We adore the idea of returning the love with a fashion statement that doesn’t break the bank but does make you rethink the idea of a bicycle chain as more than just a means to making your favorite 10-speed go. This stainless steel men’s bike chain bracelet, $39.95, is available at fashion jewelry retailer Mimmic Bijuterias, now open at The Galleria in Fort Lauderdale.

Sip in Style: Savor a well-crafted margarita, accompanied by Mexican cuisine prepared by a James Beard Award-winning chef, at El Vez inside W Fort Lauderdale Hotel and Residences. Trust us: Tequila on the rocks with salt and lime has never been so satisfying, or so chic, as it is inside El Vez’s stylish, eclectic environment complete with a breezy, beachfront vibe. (wfortlauderdalehotel.com/el-vez)

Two good to be true: If you’ve ever been stumped while standing in front of a dizzying display of gourmet fudge, truffles and brittles at Hoffman’s Chocolates, this may very well add to your indecision: Every Tuesday through Aug. 7, all Hoffman’s Chocolates shops, including Delray Beach, downtown Fort Lauderdale, Plantation and Weston, will offer a scoop of Hoffman’s ice cream for just $2 per cup or cone during the summer’s “Two Buck Tuesdays” ice cream promotion. How’s that for a sweet treat? (hoffmans.com)

Virtual skydiving: You won’t need a parachute, a passport or even the courage to jump out of a plane, thanks to iFly Fort Lauderdale, South Florida’s only indoor skydiving tunnel. Already offering a scintillating experience and a refreshing respite from the summer heat, iFly is now taking the thrills to new heights—and sights. Using state-of-the-art virtual reality helmets, fliers can freefall in breathtaking destinations such as Hawaii, Switzerland and Dubai. (iflyworld.com/fort-lauderdale)

Time to remember: Delray Beach resident David Coppa, along with 15 members of his family, previewed a special exhibition, “Americans and the Holocaust,” at the U.S. Holocaust Memorial Museum in Washington, D.C. It is a panoramic portrait of American society in the 1930s and ’40s, which examines how factors like the Great Depression, isolationism and anti-Semitism shaped American responses to Nazism and the Holocaust. For Coppa and his family, the connection to this new exhibition is profoundly personal—his grandfather was Simon Konover, a survivor and one of the founders of the museum.

How did you feel about the exhibit?

We left feeling that we must always keep guard of our freedoms, strive for a more harmonious world, and speak up against the unjust. Nothing should ever be taken for granted. We are happy to help the United States Holocaust Memorial Museum to grow, update and stay relevant.

What is the message to future generations?

Education, education and education. Our schools must teach and do their very best to keep history alive in our minds. We need to be reminded that history often repeats itself. Second, third and fourth generations must continue to share, speak and teach the personal stories that we know.