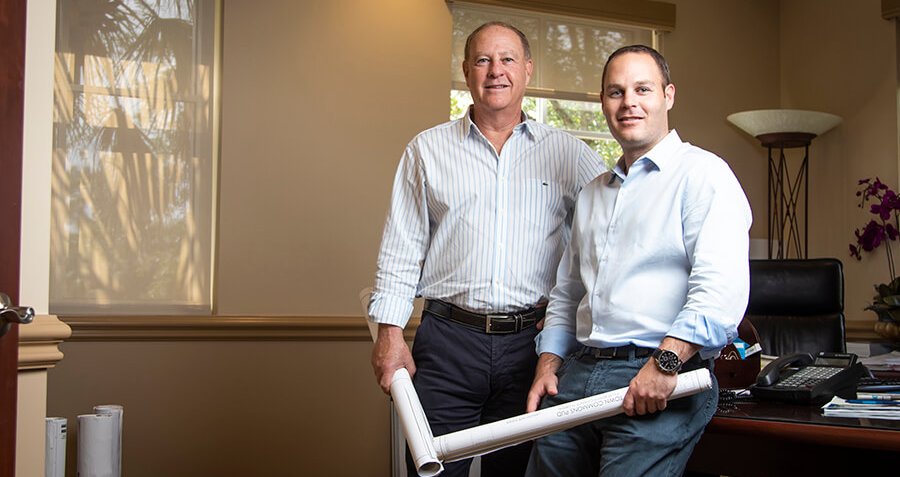 For Ryan Zuckerman and his father, Andy, going to work every day isn’t just about making a living. It’s about continuing a family legacy that’s nearly a century old.

They are business partners, along with Andy’s brothers, David and Steven, at Zuckerman Homes, the beginnings of which are told through photographs on the walls of the Zuckerman headquarters at Coconut Creek. The photo shows Meyer Zuckerman, Andy’s grandfather, standing in front of a home he built in Queens, New York, in 1924.

Meyer Zuckerman continued to build homes through the Great Depression and expanded to Long Island in the 1930s. His son, Mel, joined Zuckerman Homes in 1947 and expanded throughout New York. The family then relocated to South Florida in the late 1950s, bringing the business with them. Mel’s sons, Andy, David and Steven, joined the company in the 1970s and started building communities in the Inverrary area.

Since then, the Zuckermans have built more than 10,000 units in Florida, spanning over 50 communities that include luxury homes and condominiums. Communities include Forest Springs at Turtle Run in Coral Springs; Ternbridge and Cypress Head in Parkland; Portofino at Polo Club in Boca Raton; and La Mirage in Lauderhill. They’ve also built in Collier, Martin, Palm Beach and Lee counties. Currently, they’re finishing 100 units of the 180-unit Venetian Pointe townhouse community in Fort Myers, and Sienna Reserve, a 45-home luxury community in Naples. Over the years, the firm has distinguished itself with a hands-on, customer-first approach that includes the ability to customize home designs.

“We have a saying: ‘We’re building more than a roof over your head. We’re building a foundation for your family for the future,’” says Andy, now president of the company, who grew up visiting work sites and living in Zuckerman communities.

“I got to work for [my father, Mel] during the summer, and I loved it that much more. From being a janitor to a pool boy to an apprentice carpenter—I had every odd job that nobody would want, but I loved it,” he says. “I found it fascinating.”

While Andy naturally took to the family business, Ryan wasn’t sure of his career track as a student at University of Michigan. The summer before he graduated, Andy suggested he work with cousins in New York at their commercial mortgage brokerage firm, another mortgage firm in South Florida and, of course, Zuckerman Homes. In the end, Ryan found his niche among the complexities of the homebuilding business.

Once he made that decision, Ryan still had to ask his uncles to hire him, a shadow of the dynamics of running a family business—dynamics that can be challenging to manage. As Ryan says, it takes “a special breed” of family to be able to leave personal matters at the office door. A point of pride for the family is how managing these relationships has contributed to their success.

“They’re my uncles and my dad and my grandfather, but they’re also my friends. It’s a great working environment, which is fun,” says Ryan, who started working with Zuckerman officially in 2003 and is now vice president. “We have the same vision and goals so … we may look at things differently, but we have the same end result. We figure out a way to get there. That’s what’s really important.”

That end result, as Andy puts it, is to make the best homes they can so the business can thrive into the next generation. For him, there’s no better way to do it than with family, especially his son, who he calls “the driving force” of Zuckerman Homes for leading the company into the 21st century. Ryan has been instrumental in developing the firm’s website and spearheading online marketing efforts.

“We’re super close. We don’t fight. We hang out together. We go out to dinners together,” Andy says. “And then we come in to work, and it’s work. But we all have a singular goal: to put out the best product that we can and be the most efficient that we can be.”

The family’s unity is demonstrated in a book they wrote together and published in 2012: The Insider’s Secrets to Home Buying: Your Guide to Real-Estate Success. The book details the steps to home ownership and includes Mel’s gems of wisdom that Ryan and Andy regularly quote. (One is “Don’t go looking at a Cadillac when you’re on a Chevy budget, because you’re never going to like the Chevy once you see the Cadillac.”)

Another sign of their unity is the way Ryan has supported other legacy businesses in South Florida. In 2014, Ryan and friends in similar businesses founded Family Businesses of America; members meet regularly at social and educational events that speak to the unique challenges of working in a family business. The organization has about 50 members and includes two groups, Sons of Bosses and Daughters of Executives.

Ryan is finding that he is becoming one of the older members of FBOA, who instinctively understand the tagline on its website: “Because family business is different.” At Zuckerman Homes, he is still the youngest, creating what he calls a yin and yang partnership with his uncles and father—a balance that’s important in the risky business of home building. For example, in acquiring property for a future development, Ryan may want to be more financially aggressive, while his uncles and father may want to take things more slowly.

“They have the experience and the knowledge of the past. I have the energy to push forward,” Ryan says. “But their approach and knowledge from what they’ve done in the past can kind of throttle me back a little bit, so it’s not just gung-ho straight into the wall.”

As the company looks to the future and the possibility of a fifth generation joining the company, they continue to be guided by the wisdom of experience—Mel still comes into the office about twice a week—and the excitement of tomorrow—the company recently bought property near Lake Worth for townhomes.

“I get to work with my brothers. I got to work with my dad. The older he got, the more I appreciated it,” Andy says. “When you’re younger and aggressive, you want to conquer the world. As I got older, I didn’t want to conquer the world anymore. I wanted to be good at what I did. I didn’t have to do 10 communities. I wanted to do two or three successful ones. And then having the ability to work with your own son every day and watch him grow and eventually take the reins—how can you ask for something better than that?”

In honor of Dine Out Lauderdale in September, AC H

The Blind Monk will be relocating to the soon-to-o