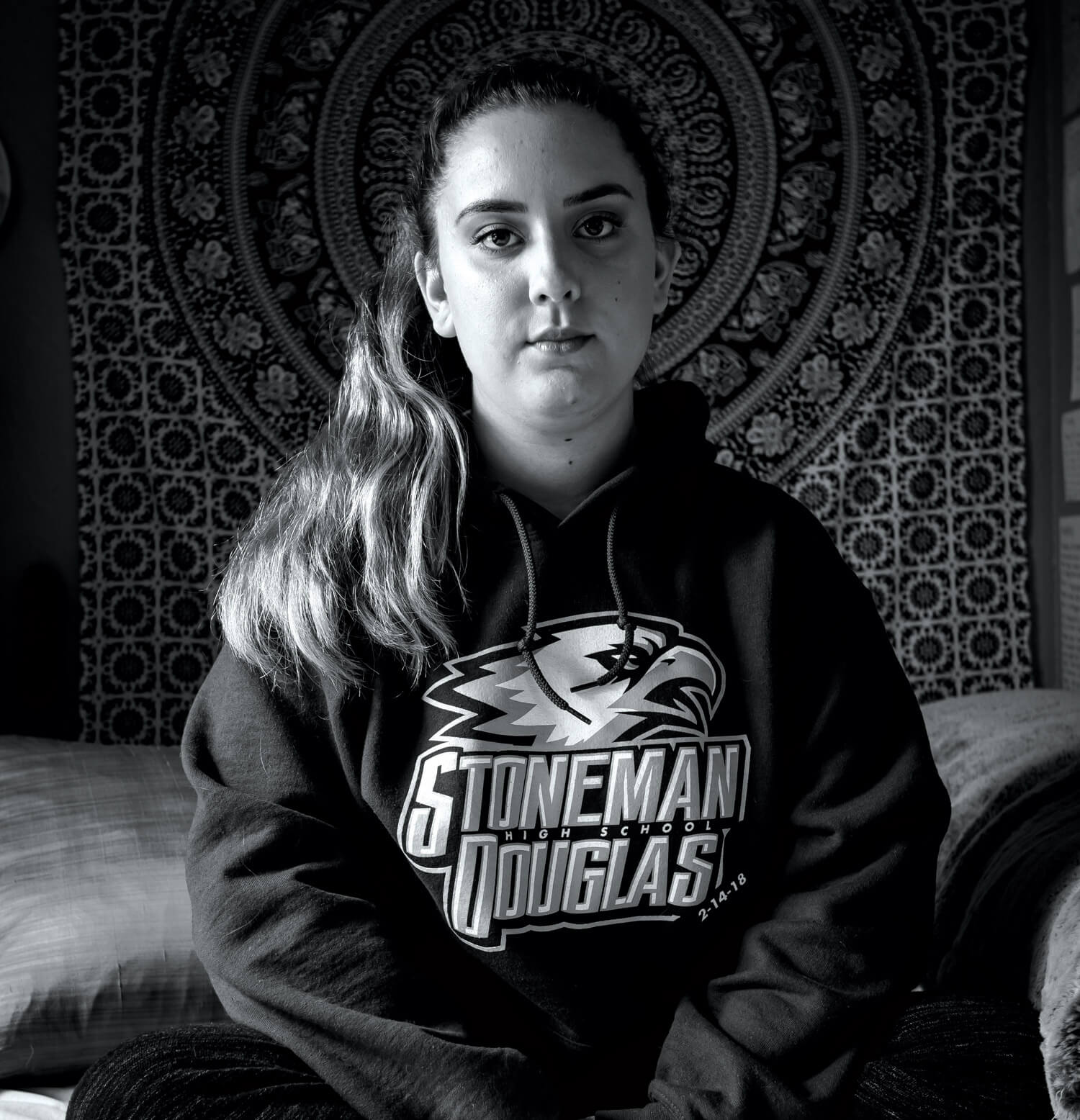 We were in our fourth-period creative writing class, Room 1255. Miss Lippel’s class. That classroom was our safe place. We were just that big happy family. We would share and tell our stories; that’s what brought us together. We were all just really, really happy; the day was going to end great.
It was Valentine’s Day.

At 2:21 p.m., we started hearing the shots. It wasn’t on our floor, but our entire class went silent. We were just like, “What … what was that? That sound was not normal.” And then we heard it again, but closer. We knew something wasn’t right. That’s when the fire alarms went off.

We all went outside the classroom, and everyone started running toward the stairs because we thought it was a fire drill. I was holding onto my friend Mady [Snyder], and we were both saying, “This is not right. Something’s wrong. Something’s wrong.”

And then, everyone started running back. [The shooter] was racing up the stairs. People started to see him. I heard terror screams.

Our classroom was the closest to those stairs on the third floor; we were just two doors down from where he was coming up. We all ran into the classroom, whoever could come into the classroom. There were people there who I didn’t even know.

Once the SWAT team came, they used their gun to break the window to open the door from the inside, so they could get in. At first, we didn’t know it was them. I remember thinking that we were going to die right then. We huddled up in the corner, and then they yelled, “It’s police, it’s police!”

I wasn’t crying through the whole thing, because I didn’t have any emotion. I was numb. Is this actually happening? Once the SWAT [team] came in, that’s when I lost it. I started hysterically crying.

We had to put our hands up [as we walked out]. It didn’t feel like I was a human anymore. There was broken glass all over the floor, and we had to walk over it. It didn’t feel real.

The police led us into the hallway, telling us to keep our hands up. “Don’t look down,” they said. “Look straight ahead.” They didn’t want us to see our friends, dead. But I saw my friend Joaquin [Oliver] by the bathroom, face down on the floor. [Editor’s note: Maddy also lost her classmate, Meadow Pollack.]
In the hallway, I saw two girls laying on top of each other. Blood was everywhere. They were gone.

There was smoke. Dust covered the floor. I couldn’t even see the colors of the tile. All you could see were footprints in the dust. And you could see a trail of blood. It looked like [the shooter] had dragged a body all the way down the hall. I later found out that someone had been shot and tried to muster the strength to move and get help.

Before we got to the stairs, I saw the shooter’s backpack and his rifle next to it. I saw bullet holes in the windows facing the outside. When we went down the stairs, the police were telling us: “Run, run, run … go as fast as you can.” That was it.

I live near the school. When I got home, I watched the news and saw people from my school on camera. That’s how I learned who was OK.

I wish I hadn’t gone to school that day. I wish I were at home and had heard about what had happened, so I could go and … I would have run to the school and helped to save my friends, my classmates.
Valentine’s Day will never be the same, ever.

During the day, I’m pretty good and I’m back to myself. But at night, right when the sun goes down, that’s when it doesn’t stop until I go to sleep. The thoughts, seeing my friends on the floor. It’s too much. Too much.

I don’t think I’ll ever be able to sit in a classroom and feel safe anymore. School should be the safest place you go.