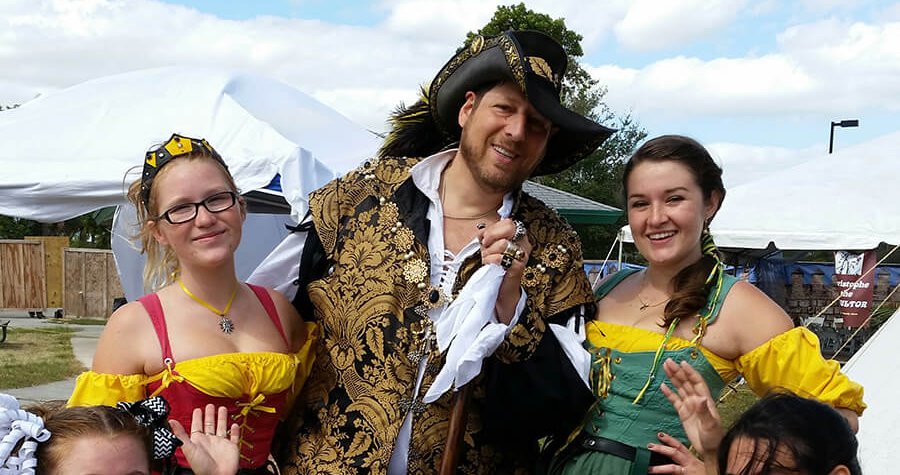 Make Way for the Baron

Though David Hochfeld worked a variety of jobs over the years, including 10 years in the restaurant industry, a part of him was always stifled.

“I was always an actor at heart,” Hochfeld says. “I was in every play in school.”

Hochfeld didn’t find an outlet for his talent until he attended the Renaissance Festival at Quiet Waters Park 15 years ago and saw his sister in action as a character actor in the well-known festival.

“When you get bitten by the Renaissance bug, it bites you bad,” Hochfeld says.

Hochfeld started volunteering at the festival, playing a variety of characters such as a knight attendant, guard, street villager or real historical figure Don Iñigo Lopez de Mendoza. As his costume became more elaborate and his acting stronger through classes, he became a paid actor and created his own characters such as Commodore Pike, Captain Smallbeard, the pirate Calrissian and evil Baron Heinrich Von Hokfelt.

The 18-year resident of South Creek—who also has performed at the Boynton Beach Haunted Pirate Fest and Mermaid Splash—talked with Coconut Creek Lifestyle about his characters and comedy style.

How was the evil baron born?

I was part of the Spanish court and I really wanted to be German. I don’t speak Spanish and everyone in the Spanish court does. At least with German, I can fake the accent. I said to the [man who plays King Ferdinand at the Festival] that I wanted to be a character like the Red Baron. … He said, “You can’t just be bad and grumpy and evil. You have to be fun. People have to think it’s great to be you.” …. I decided my weapon [would be] bribery. I would walk around with these three chests [of gold coins].

I had an amazing seamstress, Melinda Galy, make my costume. She made the doublet and shoulders and sleeves in a gold material with the black underlining. … Someone one day said, “You look just like an evil baron.” Because my last name is Hochfeld, which is an old German name, I decided to incorporate that.

What’s challenging about being in character?

What are your plans ?

I’ve been thinking about getting more into [one of the bigger pirate ship companies that does children’s educational and pirate parties] for the acting versus the festival because, frankly, at 52 years of age in the heat, I get heat exhaustion. Doing a little piece here and there keeps it enjoyable, but the moment it becomes a job, I’m concerned. … Because ultimately, if I’m not getting paid, I’m doing it for the sheer enjoyment.