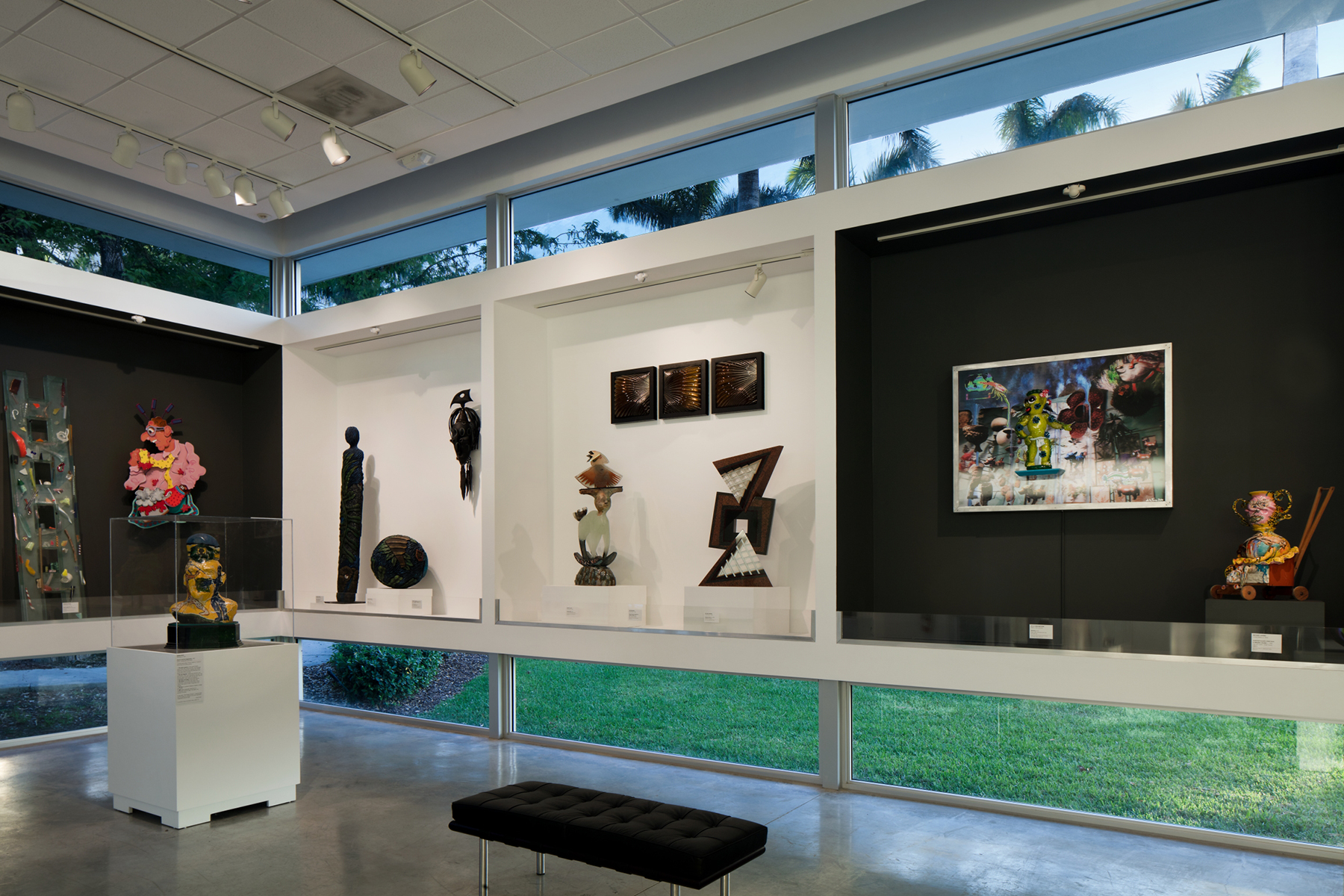 Through the Looking Glass

“Aren’t they fantastic?” Myrna Palley asks about the glass works of art inside the Myrna and Sheldon Palley Pavilion for Contemporary Glass and Studio Arts at the University of Miami’s Lowe Art Museum.

After spending an hour with Palley and her husband, Sheldon, going over each of the works currently on display in the pavilion—some housed in glass cases, some in shadow boxes with gray backgrounds to contrast their opaqueness, but all positioned so that they can be examined at every angle—a visitor is guaranteed to take away a new appreciation of glass as an art form and agree that, yes, they are fantastic.

The Kendall couple didn’t set out to be trailblazers as glass art collectors. Sheldon says their passion began when they would visit craft fairs as a family outing in the 1970s. “We’d load the three kids in the car with our poodle, and we’d go to street fairs,” Myrna says.

Adds Sheldon: “Glass was a craft then; it wasn’t an art form.”

The annual Winter Park Sidewalk Art Festival, in suburban Orlando, became the place that started it all for the Palleys, and, in turn for the Lowe Art Museum, where the couple’s promised gift of glass to the university, and a $1.7 million donation toward the building of the pavilion in 2008, has helped to raise the museum’s profile in the art world as it relates to glass and studio art collections.

A white bowl dotted with colors by Robert William Bartlett, for which they paid $45, was the start of the Palley glass collection in 1975. They now have more glass works than they can count. “We don’t go out to buy art,” Sheldon says. “We wander around and things appear.”

Over the next four decades, they would become collectors, and, in the meantime, educated scholars about glass. “In the very beginning, glass art was bowls and platters and vessels,” Myrna says. “No one thought it would go this way. It’s mind boggling.”

The Palleys’ taste evolved along with the art form. “Each artist works differently, and when you become a collector, you can tell who the artists are by their work,” Myrna says. “Their style, their way of working, the use of materials.”

Linda Boone, a glass scholar who curated the Palleys’ first exhibit at the Lowe Art Museum—which eventually led to the donation and the couple’s desire to open the dedicated pavilion—says the collection is one of the country’s most important historic and current studio glass collections.

“There are very few people that have a collection that reigns over so much of the history and development of the glass movement, and they have a range of work from around the world, as well as top artists working in the United States,” she says.

Boone, co-founder of Habatat Galleries in West Palm Beach, which represents a number of world-renowned glass artists, oversaw a refurbishment this year to mark the 10th anniversary of the Pavilion, and, the Lowe Art Museum has dedicated 2018 as the Year of Glass.

“The Lowe’s Palley Pavilion is a unique asset for the University of Miami and for our entire region. The Pavilion provides an unparalleled opportunity [for visitors] to not only immerse themselves in the sheer wonder and beauty of contemporary glass art, but also to learn about its history and evolution,” says Jill Deupi, Beaux Arts director and chief curator of the Lowe Art Museum.

While their promised gift of glass art has a home at the university museum—a promised gift becomes the property of the university after its donors die—Myrna lovingly describes where each piece held court inside her home. She points to a work by artist Henry Halem. “That one. That was in our hallway, right?” Sheldon says he definitely remembers that is where Halem’s “Dancers” was. And Jose Chardiet’s Emerald Mesa? “That was in our bedroom,” Myrna recalls.

“Any spaces that are left because something comes to the museum, or is lent out, we replace it with something else. There are no empty spaces in the house that aren’t filled with glass pieces,” Myrna says.

Glass is a pleasure and a passion for the couple. “There are so many elements to this art as opposed to the one dimension of painting, for instance,” Myrna says. “The glass feeds off the atmosphere, off of light. Glass builds an environment around itself. It’s what I find so amazing. You can look at one piece and get something different from it each time.”

To add to the intrinsic value of the collection, a number of the works have been donated by other philanthropists. Estimates are that the collection inside the Lowe Art Museum is worth $3.5 million, but the Palleys say the joy they have derived from the glass and what it adds to the art landscape of the Miami—well, you can’t put a price on that.

Northern Irish glass sculptor Clifford Rainey, whose works are part of the Palley glass and studio arts collection, will speak as part of the Palley Glass Artist Lecture Series on Nov. 8, 7-9 p.m. The Lowe Art Museum and Palley Pavilion is on the campus of University of Miami, 1301 Stanford Drive, Coral Gables. Visit lowemiami.edu.

Pieces Not to Miss

• Wing-Nut/Tee-Slot Bolt. Created by Rick Beck, a western North Carolina artist who uses glass to represent items usually regarded as sturdy and nearly indestructible. “It unscrews. Is that not cool?” Myrna Palley says.

• Nasal Flat. Robert Carston Arneson’s gigantic ceramic self-portrait (pictured). Arneson died in 1992, but appeared in many of his own pieces. The California ceramicist was considered the father of the ceramic Funk movement. Donation to the collection by Janet and Joseph Shein.

• Spool. Hank Murta Adams’ creation from cast glass, steel, copper and 1,500 time cards. “We saw this and had to have it,” Palley says. “We didn’t know it would have to be disassembled and assembled.”