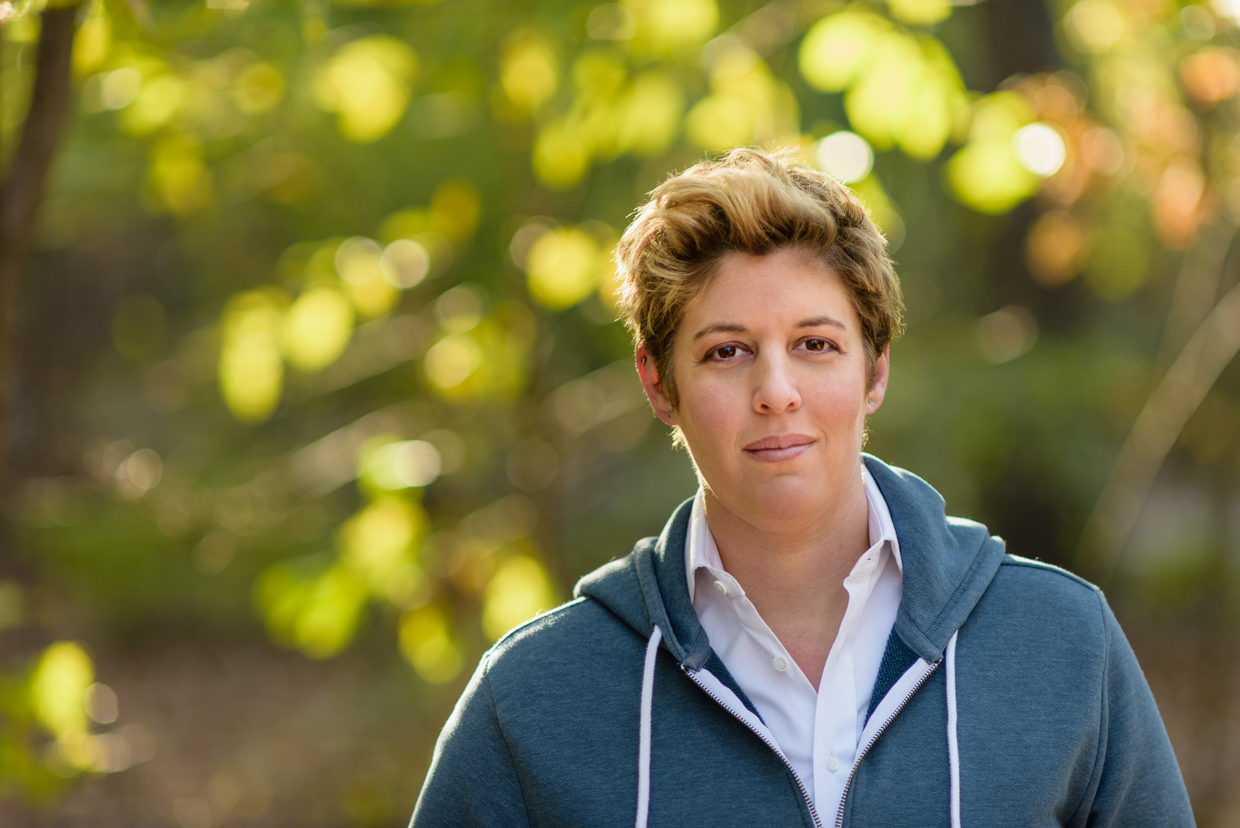 CNN’s Sally Kohn explores the vitriol and bias that’s dividing our country—and offers a path forward—in her recent book, The Opposite of Hate

For the record, Sally Kohn does not claim to be perfect. She has no interest in being chief of the hate police. And despite the playful jabs she takes at Kenny G in her book, The Opposite of Hate, she has nothing against him personally. (She just isn’t a fan of his music.)

But after speaking to a one-time neo-Nazi, a former Palestinian terrorist who now works with Israelis on peace initiatives, survivors of Rwandan genocide, some of her most brutal Twitter trolls, and several others for the book published last spring, the CNN political commentator and leading progressive voice does have insights into the “crisis of hate” tearing apart our country at its polarized seams. She also has suggestions for how to combat it—starting with her own shortcomings and blind spots.

“What I want is for people to be more clear-eyed and open,” says Kohn, who lives in Brooklyn with her partner and their daughter. “It’s not about blame and shame. It’s about noticing our patterns and making the unconscious conscious. It’s about taking responsibility.”

The one-time contributor on Fox News will have plenty more to say about the topic Dec. 4 at the Alper Jewish Community Center (11155 SW 112th Ave., Miami) when she appears as part of the annual Berrin Family Jewish Book Festival.

Kohn spoke to Lifestyle about some of what she has learned.

Why were you compelled to address the underpinnings of hatred at this time?

It really did stem from my own desire to understand my place in these broader dynamics. People will say, “It’s a big problem.” But when you ask who needs to fix it, everyone’s answer is “Them.” The right says the left. The left says the right. And so on.

Well-meaning, liberal white folks can talk until the cows come home about how the right wing and overt racists are the bigger problem. OK. Systems of racial injustice, structures of racial hierarchy, implicit bias, policies and practices rooted in bias? Those are all going on in places that are shaped by well-meaning liberals too. So, there’s something else.

If we’re only focused on blame and “them,” then we’re not having conversations about what we all need to be doing to have less hateful interactions.

Do you sense that it’s tough for liberals to recognize that “we’re better than them” also perpetuates the cycle?

I understand that mindset. I’m steeped in it. That’s why I wanted to tackle it.

In the wake of the 2016 election, I was at event after event, dinner after dinner, with my liberal friends who would be saying, “Oh, those Trump voters. They’re so Islamophobic. They’re so racist. They’re so hateful—and I hate them.” There was no awareness of the irony of such a comment. They’re saying that if this group is hateful, we’re justified in hating them. To not even be aware that you’re on a high horse and thinking you’re not hateful, is part of the problem.

Now, do I think that demeaning rural white folks by East Coast elites is anywhere as severe or consequential as unconscious racial bias, or institutional or systemic misogyny and sexism?

No. But the fact that it’s not as bad doesn’t make it OK.

How do you reconcile the ideas in your book with the notion that some of the divisions in our country are stoked by the types of intense debates in which you participate on TV?

To be honest, that’s something I haven’t reconciled. Look, I was able to have the second career that I have—and the platform to speak out—largely because of my participation in cable news and social media. In particular, my participation in them in a discordant way.

This is a constant tension for me. It’s similar to how you talk about the Trump administration. On the one hand, you can say, “Well, we need civility and decency in politics. We should be displaying the kind of compassion that they lack.” On the other hand, you can say, “You have to fight fire with fire.”

Both sides have a point.

I’m not saying I have all the answers, but I do feel this particular problem is one that we all need to tend to.

Following the shooting at Marjory Stoneman Douglas in Parkland, we saw firsthand in South Florida how hateful internet trolls could be in their posts about the student advocates. You actually met with some of your social media trolls. What’s your advice to people dealing with that kind of online ugliness?

There’s no comfort to this. It’s incredibly disheartening. For people who didn’t grow up with it, nobody is pushing you on the playground, so it may not seem as bad. But, in fact, it has a totalistic, kind of a surround-sound quality—while at the same time being incredibly isolating.

That people would take time out of their lives to send you unmitigated, brutal hate is just a reflection of the very worst in us. It’s hard to experience if you’re someone with a shred of hope in human decency.

If our kids were being hit by cars at an intersection with no stoplights, we’d be doing something about it. So, if our kids are being repeatedly beat up online, it’s our job as a society to protect them. … The kids facing this need to talk about it, get support and connect with other kids who are facing this, so they understand they’re not alone.

And the rest of us need to push back. Let’s do something about the platforms and engage Facebook and Twitter and others with how they deal with hate messages.

Now that we’re content creators online, we’ve perpetuated the “if it bleeds it leads” dynamic from TV news. The negative gets more attention than the positive. One celebrity attacks another celebrity, and that makes news. … It’s also about our society and culture, and how we incentivize hate and discord and negativity. We click on it and tune it in.

Unfortunately, it’s not an easy problem to solve. But I don’t think we solve it unless we start identifying it.

If conservative legislation were to reverse the gains that the LGBT community has fought so hard to earn, how would you explain that to your daughter in a way that doesn’t stoke resentment as she gets older?

At institutional, structural and policy levels, there’s a moral imperative to move beyond hate and remedy the injustices of the past. At the individual level, especially for those who’ve been on the receiving end of hate the most, it’s a choice.

I choose—and I haven’t always been this way—to try to see those who would deny my equality and humanity with the respect and humanity that they would deny me. I choose to try to believe that they don’t mean to be hateful; I try to give them the benefit of the doubt.

It’s been my experience that most people don’t view themselves as hateful. Most people have reasons for doing hateful things that they see as a kind of love toward their own group. The result is undeniably hateful, but it’s the difference between talking about impact and intentions. I try not to impugn someone’s intentions, because I don’t like when it’s done to me. If you’re someone like me, who says she believes in equality and dignity of all people, do you really mean all people? Even those who would deny my equality? That’s the question.

Do you think the average person reading your book feels like he or she can make a difference?

When we think of institutions, especially at a time when people as individuals feel powerless, it’s an understandable reaction. And it’s a justification for going along to get along. It’s too hard to swim against the stream, so I’ll just go with the flow.

It’s important to recognize the difference that individuals can make. The fact is that we all touch people. We all have communities that we can help shape. … The world is hateful. And this is a nasty time. But it’s only made more hateful by our complacency.

Ultimately, despite the current political climate, do you see our better angels prevailing?

I think the history of America is one of struggle between our better angels and our worst angels. Unfortunately, as a society, we tend to embrace our angels rhetorically—and hold onto our demons in practice. We said that all men were created equal. But, in practice, we built a country on slavery, literally and figuratively. This is a country built, ostensibly, on genocide; we eradicated its native people.

So, these hypocrisies, these conflicts, these contradictions have always been with us. It’s naïve and nostalgic whitewashing to suggest otherwise.

At the same time, I think that when we’ve been at our best as a country, when we’ve righted wrongs even in incomplete ways, it’s been when we’ve tried to reconcile our ideals with our actions.

What: The 38th annual edition of the book festival promises another stellar lineup of nationally renowned authors at locations in south Miami.

When: Events run through March 13.