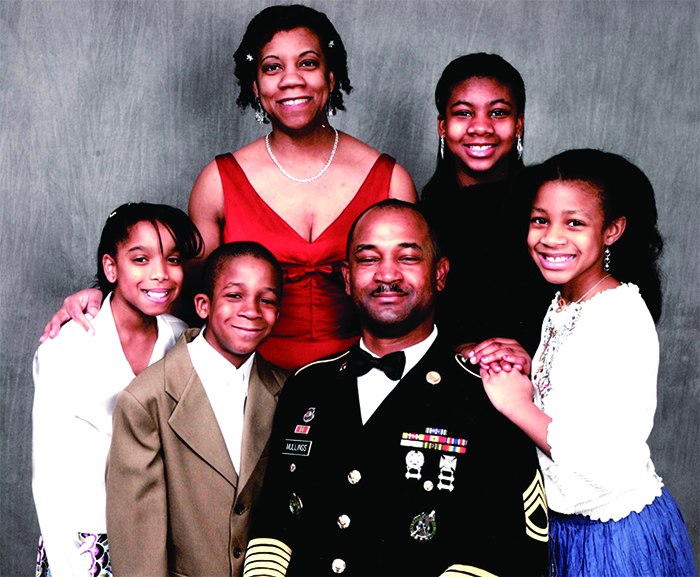 A Salute to SFC Mullings

What happens when you serve in the military, holding positions that include combat jobs, administration, drill sergeant and recruiter? You form a squad of your own at home.

That’s what SFC Christopher Mullings did. He and his wife, Donna, have seven children whose ages range from 17 to 32. His oldest son, Christopher Jr., who passed away in 2012, would have been 32 this month.

After 31 years in the Army, Mullings has learned a lot about life and family. “As I get older, I get better,” he says, referring to reaching his personal best score on an Army Physical Fitness Test earlier that day.

With the intentions of joining the military, he and his brother moved from Jamaica to the U.S. in 1983. “We wanted to be a military family. We believe in the military lifestyle,” Mullings says. “The military really guided us through everything and afforded us a lot of things we couldn’t do in Jamaica.”

The Army gave him the ability to travel, buy a home and send his children to college. He enlisted in 1984 and met Donna a few months later. “My wife has been the greatest Army wife,” Mullings says. “She has been involved in every unit I’ve been in.”

Over the years, Donna immersed herself in a variety of Army family support groups and focus groups. Currently, she spends a lot of her time in Miami working with civilians to assist in various family projects. Last month, Mullings and his wife teamed up with AARP and the Miami Dolphins to help pack a million meals, which were distributed to poor areas throughout the U.S., South America and the Caribbean.

“Christopher and Donna are two of the most caring and compassionate people that I’ve had the pleasure to meet,” says Maj. Gregory Shepard of U.S. Army Fort Lauderdale Recruiting Company.

Growing up, Mullings always had a strong desire to get involved and to give back. He had his first taste as a young boy in Jamaica as a member of a private organization called the Cadet Corps. Every summer, he would help clean a river, construct a bridge or build a home.

His kids continue to absorb their father’s selflessness and make it a priority to volunteer as well. “I feel really blessed with my kids,” Mullings says. “As we moved around the country, they’d always be involved in organizations that would enhance what they were learning in school and on a personal level.”

With content, Mullings says that his girls are exceptionally smart. His oldest daughter, AnneMarie, 32, is an Army-registered nurse stationed at Fort Lewis in Washington. Shante, 22, recently graduated with a degree in social services. Keesehmboh, 21, is currently attending The Art Institutes to achieve her bachelor’s in culinary arts. Imani, 19, will be a freshman at UCLA this summer to study to become an OB-GYN and work in Asia.

“My boys… they’re not really college-minded. They are very much like me,” Mullings says. He describes his sons as hard workers that desire to support a family. His two older sons were in the Army. Christopher Jr. served three years and his middle son, Brian, 27, served nine years. Amahruh, 17, will most likely enlist after high school.

A strong military value states that if the family is not comfortable or maintained, the soldier cannot perform his or her duties. Mullings and his family exemplify this value. “As much as we have a military mission to accomplish, we have to put our family first,” Mullings says.

Typically, the Army moves its soldiers once every three years. Mullings has lived in 13 different states; however, since 2004, his kids have moved only four times.

“Growing up, I remember him being gone a lot, which was challenging for me at times,” AnneMarie says. “I quickly learned to adapt to the military lifestyle. With the strong family foundation he built, I was able to overcome many of the challenges that came with his absence. As the child of a service member, you have to be resilient.”

Donna took a strong approach to her family’s lifestyle as well. She says that being a military spouse has taught her how to be independent during her husband’s time away. “I enjoy being a military spouse, but at times, I feel like a single parent,” Donna says. “Our kids were very active and involved in many different activities growing up. I’ve had days in which I had to attend several events at the same time.”

“Donna’s been marvelous,” says Mullings, who believes that his wife is the best thing to ever happen to him. “Without her, the family wouldn’t be what it is today.”

Out of all the positions that Mullings has held over the course of his 31 years, he says the most rewarding was his three-year reign as a drill sergeant. The ability to take a civilian off the street and train them to be a soldier is one that he cherishes most. He has a similar feeling about his current position as a recruiter.

“Everything that we’ve needed, the Army has always been there to support us,” Mullings says. Coming from Jamaica with “just the shirt off my back,” Mullings attributes the Army to leading him to his wife (which he declares, “was the best thing”) and being able to watch his children grow up and be successful.

“They’re a strong family unit with lots of love, character and values. They’ve served in the Army for a long time and have experienced the challenges of multiple assignments and numerous moves, jobs, circles of friends, etc.” Shepard says.

As confident as can be, Mullings says that choosing to join the military is the best decision he has ever made.