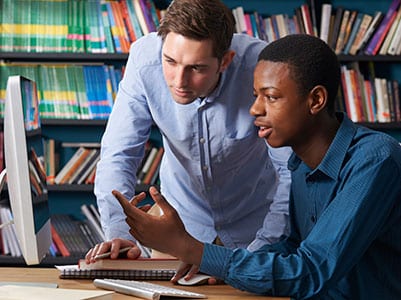 The Parent Teacher Student Association (PTSA) of Miami Palmetto Senior High School recently received its single largest donation in the school’s  history. The $12,500 donation, from Miami native and Palmetto High graduate (class of 2000) Christopher Sanderson, along with an additional $1000 donation from their Campaign for Excellence is nowbeing used for the new testing suite.

Sanderson founded Sanderson Test Prep in 2011 and opened new locations in Coral Gables and Hallandale Beach in 2014. A true story of how a hometown boy and local businessman gives back both to his school and his community.

The dedicated space was created in the school’s existing media center with desks and 50 new computers. The new suite will not only be a testing space for the FSA (without displacing students in other classrooms with computers), but it will allow the school to offer a new AP Computer Science course.