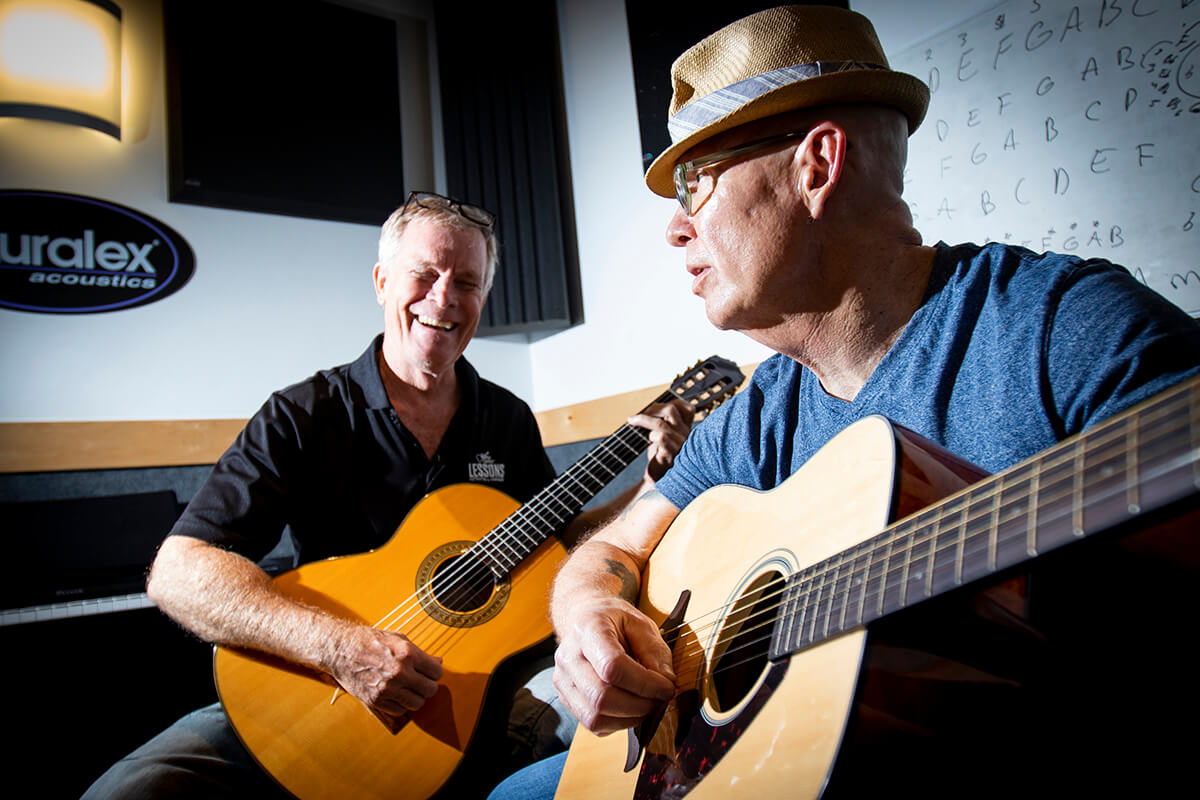 An avid outdoorsman, Richard Bendit of Wynmoor would sometimes run 15 miles a day. Then there were the hours of weight training. After that, he’d swim laps in the pool, so many that he wasn’t able to keep track.

After he was diagnosed with melanoma 10 years ago, his workouts didn’t slow down. When he retired from the art gallery he owned for 30 years, New Art Gallery in Deerfield Beach, he began to intensify his workouts.

But, a few months ago, Bendit was forced to slow down. The cancer had returned and was more serious. “I had two bouts at the same time in the last couple of months,” he says.

The 64-year-old decided that it was in his best interest to not train outdoors anymore, but he needed an outlet to channel his energy. He discovered the guitar.

“I could have just stayed in the gym and used the treadmill, or found an indoor pool, but I always wanted to learn an instrument, so I bought a guitar,” Bendit says.

Once a week, usually on Fridays, he meets his teacher Rick Averill for a private guitar lesson at Guitar Center in Promenade at Coconut Creek, which offers a variety of music classes.

Teaching private lessons has been gratifying for Averill, who was a music educator for most of his career in middle schools and high schools throughout Florida and Georgia. “I would work with the kids on a very high level of musicianship for three or four years, and then they would graduate and then go on to other things,” he says. “But when teaching adults, they don’t age out of the instruments.”

Averill believes, too, that retired people are in a position in life to either pick up where they left off, or start something new. “Maybe they played in the marching band or orchestra when they were in high school, then life got in the way,” Averill says. “Now they have this discretionary time.”

And, he says, there is no age limit to learning or relearning the skill. “Someone who played football in high school probably isn’t going to play when they are 60, but people who played an instrument, they can pick right up where they left off.”

What the musician and teacher finds most gratifying is when one of his students comes in for a lesson and tells him about the time they’ve spent practicing. “They’ll say, ‘When everyone has left the house and I have the place to myself, I sit down to play.’ I listen and I think ‘Wow, this is me really doing this.’ That’s the best part of my job.”

There’s another benefit that Bendit has discovered since he began learning to play guitar three months ago. While he misses the intensity of his outdoor training, learning to play a musical instrument offers a different type of workout. “This is mental exercise,” he says. “It really is good for your brain.”