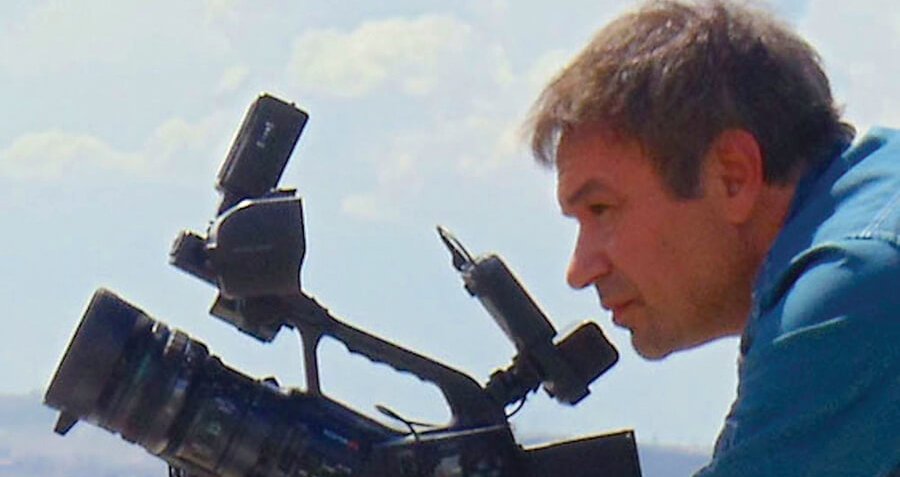 Stories in His Heritage

He makes his home in Coconut Creek, but much of documentary filmmaker Bared Maronian’s time is spent in other cities, and in other countries. The former editor and special projects editor at Miami’s PBS station, WPBT, says it was public television that helped him develop his craft of producing documentaries, eventually leading him to found his own company, Armenoid Productions. Yet it was his DNA that carved the next chapter of his career.

While at PBS for 15 years, where he won four regional Emmy awards, Maronian began research on short documentaries about the Armenian people. “I started looking into some things that I wanted to do on my own,” he says.

Maronian was born in Beirut, Lebanon, of Armenian heritage. “Because of the [1915] Armenian genocide, there were huge deportations,” he says. “My grandparents on both my mother’s and my father’s sides made it to Aleppo [Syria], and then to Lebanon.”

The Lebanese civil war eventually led his parents to move to Florida. Maronian stayed behind, but in 1989, he left Beirut, too.

“I was 24 when I came to Florida,” he says. “The university I went to in Beirut [Haigazian University] was American-affiliated, so we were taught in English.”

Maronian, who majored in political science, says he was only a few credits away from graduating when his immigration documents arrived, forcing him to leave immediately. Worried he wouldn’t have a degree, but knowing that his chance to move to America was hanging in the balance, he learned that he could attend an accredited U.S. college, complete the coursework, and receive his degree. Palm Beach Junior (now State) College fit the bill.

While he had been familiar with American culture from his time at Haigazian, life in the States had its share of surprises. “I was amazed at how peaceful life was here,” he says. “Yes, it was difficult to start a new life, but now I’m a proud American.”

He moved to Coconut Creek 17 years ago after trying out different South Florida cities. “Creek was closer to Miami when I was working there, and now, well, it just provides a nice lifestyle for my family.” He lives with wife Lina and daughter Kaliana, 18.

While his base is Creek, Maronian goes wherever the story takes him—from Australia to Argentina to the Middle East to Canada, and to several American cities in between.

Since 2008, when he began Armenoid Productions, which specializes in producing thematically Armenian documentaries, he has focused on four films about the Armenian genocide: “The Wall of Genocide,” a poetic presentation of Armenian history; “Komitas Hayrig,” about two Armenian clergyman, Komitas Vartabed and Khirimian Hayrig, who were directly affected by the genocide; and two documentaries, “Orphans of the Genocide,” and, his latest, “The Women of 1915.”

When he began his research for “Orphans,” he went to Worcester, Massachusetts, to interview Clark University history professor Taner Akcam, an international authority on the Armenian genocide. He also traveled to London to speak with British journalist Robert Fisk, who had been Maronian’s inspiration to work on the film. Fisk had written a story for London’s The Independent newspaper in 2010 that unearthed “living proof of the Armenian genocide.”

“One of the world’s largest orphanages housed 22,000 children in one complex during the Armenian genocide of 1915,” Maronian says. “I found film and photos that showed these kids with no parents. These were big stories that no one really talked about.”

Originally produced as an 18-minute documentary in 2010, “Orphans of the Genocide” evolved to a 90-minute full-length feature. And when Maronian’s first documentary was done, he immediately began his next film. “As I was working on the stories about the orphans—every time I would find something about a child being saved—I would uncover a story about the woman who saved them,” he says.

“Women of 1915,” a one-hour documentary, is about those victimized during the genocide, but it also profiles American and European women who came to rescue many of the orphans.

“What happens when making a documentary is that you have a story, and then, while you’re working on that story, you come across something else, and it may change the course of what you’re doing,” Maronian says. “There are these details that you discover once you start digging.”

While there is still much left to be done on the Armenian genocide, Maronian says other pieces of history he’s uncovered in his research have the makings of some great documentaries. While he doesn’t want to divulge what’s next, he does give a hint: he’s fascinated with America’s early settlers.