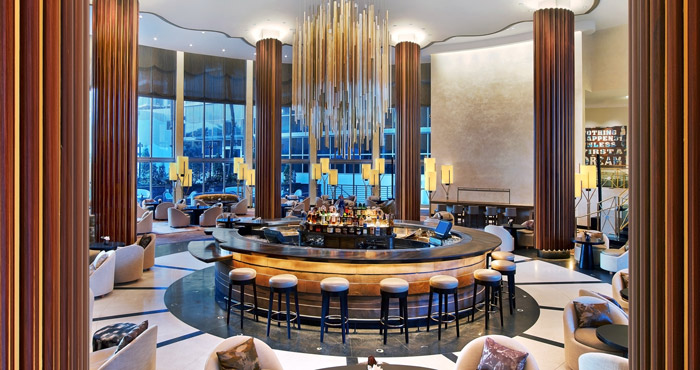 Why go: In February, the famed resort debuted a renovation project that totaled some $250 million. The property’s 415 rooms were updated—this, only two years after its hotel-within-a-hotel concept, Nobu Tower, drew raves. Legendary Japanese chef Nobu Matsuhisa, in partnership with actor Robert DeNiro, has a Nobu Hotel in Las Vegas, and now one in Miami Beach. Nobu Tower has 206 rooms with modern, elegant touches, inspired by Japan and Eden Roc’s spectacular on-the-beach location. Matsuhisa’s signature Nobu restaurant inside the Roc is the first in Florida and among the largest in a chain of more than 30 establishments around the globe. California’s Malibu Farm, chef Helene Henderson’s farm-to-table concept, occupies a beautiful open-air space directly overlooking the ocean. Don’t forget the Lobby Bar–one of the great people-watching spots in Miami (pictured above).

Summer specials: The “Only All-Inclusive Package in Miami Beach” includes room accommodations, resort fee, bottles of water, high-speed internet access, complimentary in-room coffee and tea set-up, one beach chair per person, a breakfast buffet, lunch and dinner at select venues, wellness classes, bar and full menu service by the pool and beach, and alcoholic (select brands) and nonalcoholic beverages by the glass at participating outlets. The package runs through Sept. 30 at both Eden Roc and Nobu Tower.

Why go: Actress Eva Longoria shot the pilot for her new ABC television show, “Grand Hotel,” at Fontainebleau. She said there was no other hotel in the world that suited the new series so perfectly. There is history in the walls at this historic showplace, which opened in 1954, and was the mecca of Miami Beach nightlife even then. In 2005, Fontainebleau closed its doors for a $1 billion renovation and expansion that took 2½ years. There’s still some of the original style that’s an intentional throwback to its days as the Las Vegas of the South, including its original iconic bow-tie patterned floor, a nod to Sammy Davis Jr., Frank Sinatra and the other Rat Packers that used to drink martinis in the Bleau Bar in the lobby. With its 1,504 rooms and suites, Fontainebleau is equal parts experience and luxury retreat, which is definitely the reason to put this on your staycation “must” list. Plus, Fontainebleau’s summer painting classes on Thursday nights at La Côte include complimentary rosé.

Summer specials: “Bleau Summer,” good through Sept. 30, invites patrons to stay cool with cocktails and snacks while lounging poolside, compliments of the $50 daily food and beverage credit included during a stay in a deluxe room or better. Complimentary valet parking is included. With the “Days of Summer” package, save 50 percent on a third night when booking an oceanview room or better.

Why go: According to Argentine hotelier Alan Faena, the look, feel and experiences at this Miami Beach property are all meant to evoke a utopian experience. Utopia can be found inside the Tierra Santa Healing House, which occupies the entire third floor of the 12-story hotel. The spirit of the 20,000-square-foot spa was inspired by shamans; the look was inspired by Faena’s beach house in Punte del Este, Uruguay, which bears the same name. Many of the unique healing therapies were created in collaboration with Faena’s personal healer, Carlos Gomez. Treatments are designed to not only relax the body but to calm the mind. Release tension everywhere with Tierra Santa’s signature Tree of Life Vibration treatment, where the tuneup comes from sacred oils, hot stones and the chiming of metal bowls. Sound therapists produce various tones on Nepalese singing bowls to balance different areas of the body. Tired of South Florida’s sweltering summer? Chill out in the spa’s Ice Parlor, where a cold mix of air and ice is meant to get your blood moving. Each of the resort’s bars—The Living Room, Saxony Bar and Tree of Life—are artful, decorative gems; while the world-class restaurants—Los Fuegos by Francis Mallman and Pao by Paul Qui—are among Miami’s must-visit dining experiences.

Why go: Usually the domain of quaint B&Bs, Key West’s historic Old Town hadn’t welcomed a new hotel in two decades. All that changed with the recent debut of The Marker, named for the mile markers along Overseas Highway, the route to the southernmost point. Located at the edge of the Key West Seaport, the hotel has 96 rooms on nearly two acres of land, plenty of room for its three pools, including one that’s reserved for adults only. Request a room with a marina view, then step outside on your private balcony and take in the waterfront. For an only-in-Key West treat, have breakfast at the on-site, open-air, waterfront restaurant Cero Bodega, already creating buzz for its banana bread French toast dipped in coconut batter and topped with oven-roasted pineapple, and served with mango syrup. Go ahead … you’re on a staycation.

Summer specials: The “Mark Your Love” package celebrates romance with chocolate-covered strawberries and a bottle of red wine delivered to your room on the day of your arrival. The “Mimosa Breakfast” special offers discounts on breakfast and cocktails daily at the poolside Cero Bodega.

Why go: Everything at 1 Hotel South Beach is meant to be mindful of the environment—from hangers made from recycled paper and reclaimed driftwood for room door handles to hemp-filled mattresses and in-room triple filtered drinking water. The 425-room hotel takes advantage of its pristine location too. Occupying 600 feet of Miami Beach oceanfront, it has four swimming pools, including its 110-foot oceanview swimming pool on the roof, reserved for adults only. Three other pools are just as distinctive: The 30,000-square-foot center pool is the place to have fun with family and friends; the more-intimate pool on the third floor invites privacy with 12 cabanas; and the beachfront South Pool features a secluded beach club along the Atlantic, where the waitstaff delivers food and drinks. After a day of sunning, explore South Beach in the hotel’s chauffeur-driven house car, a Tesla electric. Bring your own electric car and take advantage of complimentary parking.

Summer specials: The “Summer Solstice” special provides 30-percent-off room rates, plus a $30 food and beverage credit for Plnthouse (until Sept. 4).