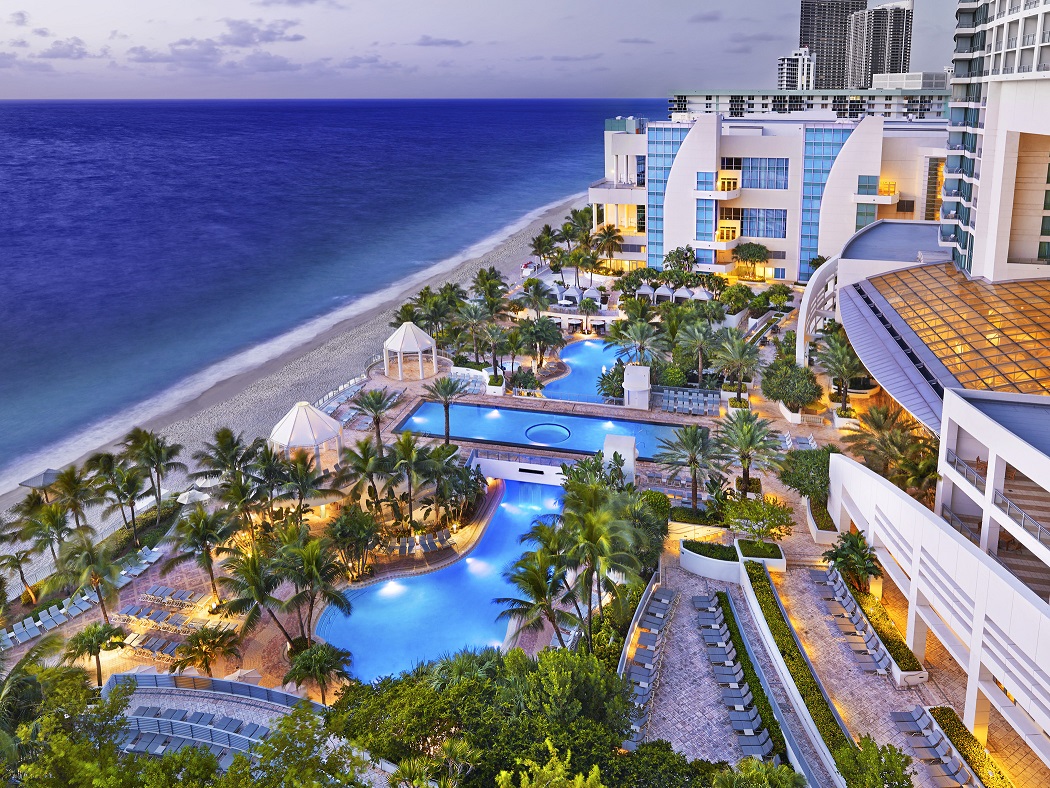 It’s been more than 60 years since the founder of a supermarket chain opened the first incarnation of The Diplomat on South Ocean Drive in Hollywood. Back in those early days, entertainment was part of the allure—A-listers Judy Garland, Sammy Davis Jr. and Liza Minnelli all played the hotel, and Arthur Godfrey taped his radio show there.

Then came the 1980s and ’90s, a forgettable stretch that included arson fires, financial woes and a Saudi sheik who walked out on a $1.4 million room tab. Fittingly, those two decades culminated in an out-with-old dynamite implosion that gave way to a soaring new 1,000-room beachfront hotel and convention center in the early 2000s.

But when it comes to making history, it’s the property’s $100 million renovation, which debuted two years ago, that has ushered in a modern-day golden era of oceanside hospitality. The Diplomat Beach Resort, which reopened under Curio (a collection by Hilton Worldwide), is 39 stories of contemporary glam, family comfort, world-class dining, and five-star amenities and service rolled into one epic destination. Here are just some of the reasons why The Diplomat is better than ever. 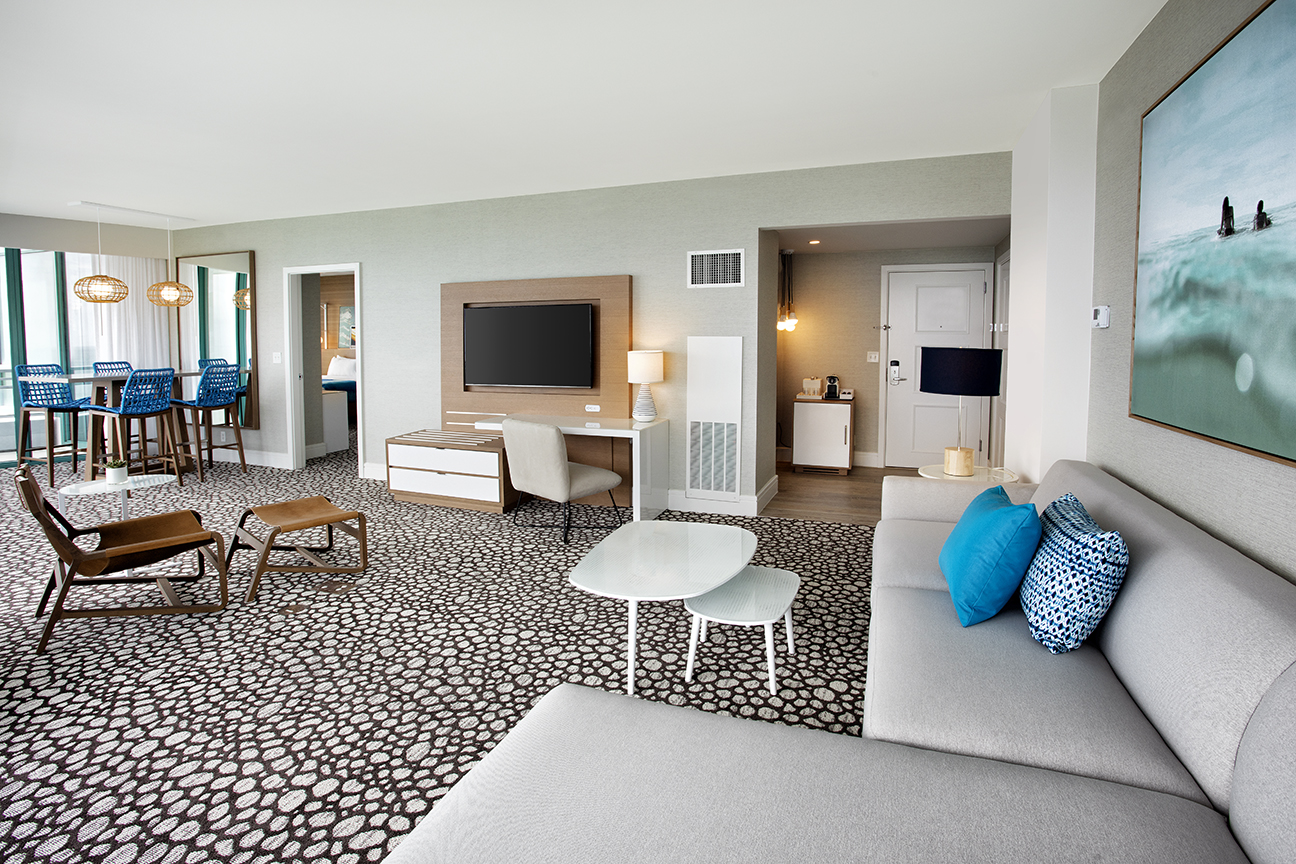 The suite life: Size matters at The Diplomat, which ranks as the largest hotel in Broward County (it’s also the largest convention hotel in South Florida with 209,000-square-feet of indoor/outdoor function space, enough to accommodate as many as 5,000 people). But it’s more than just a numbers game when it comes to the reimagined guest rooms and, in particular, the 96 available suites. The oceanfront corner suite, for example, checks in at 712 square feet with a living lounge area, a separate bedroom (with a plush king bed), a lengthy private balcony overlooking the Atlantic—and a chic, earthy and airy design vibe courtesy of Hirsch Bedner Associates. Need more space? Ask about the Governor (1,550 square feet) and the Presidential (2,550 square feet) suites. 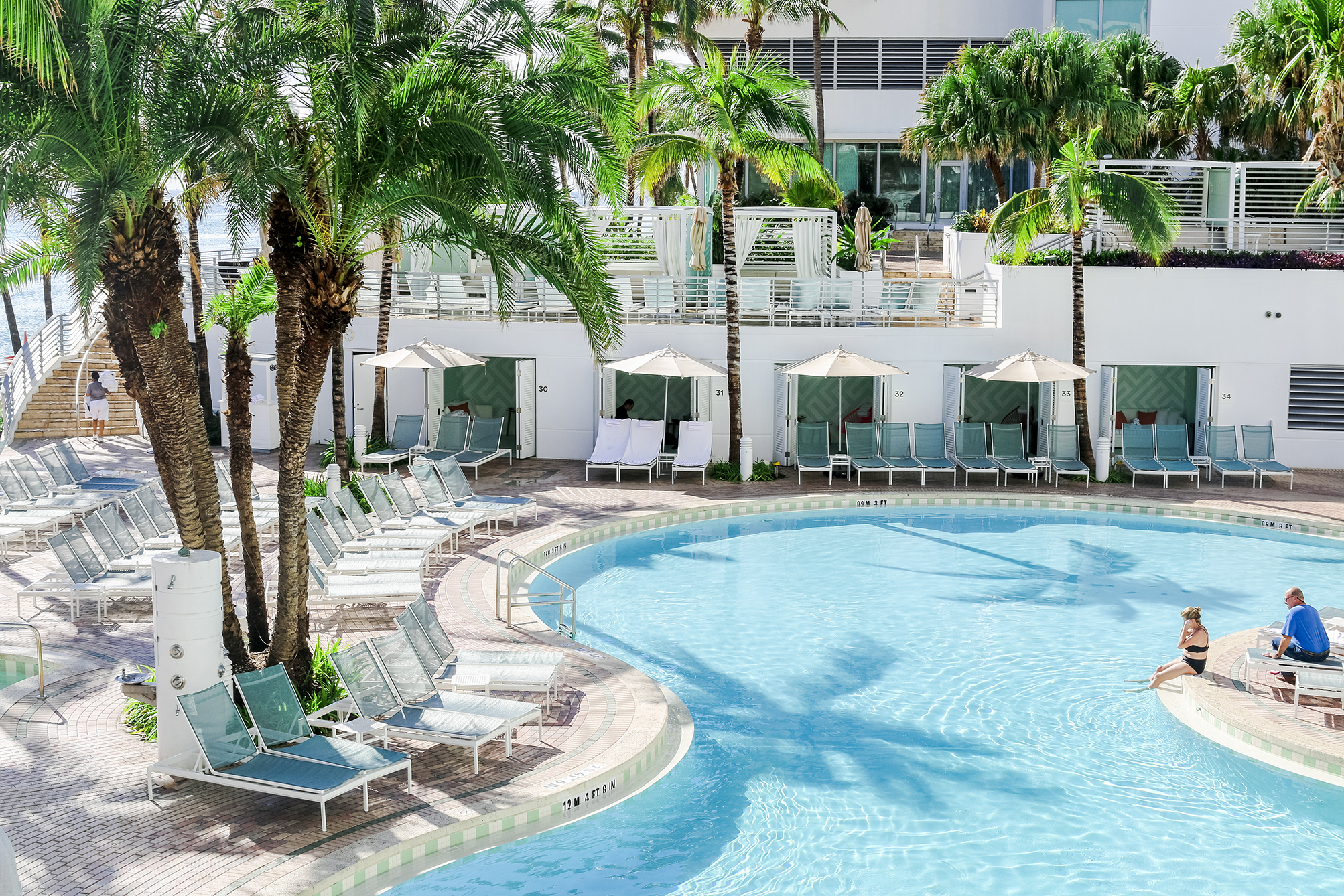 The life aquatic: As if the property’s second-level infinity pool, two waterfalls, kids Dip & Slide area, and 240-foot lagoon pool weren’t enough of a daytime draw, there are 25 private cabanas—including four fashionably designed by lifestyle brand Trina Turk—to heighten the experience. The cabanas, which accommodate as many as six people, sport an HDTV, a mini fridge and cooling fan, plus two chaise lounge chairs for sunbathing. Order ceviche, salads, tacos, guacamole and chips, sandwiches and adult beverages from Playa, the resort’s beachfront bar/restaurant. 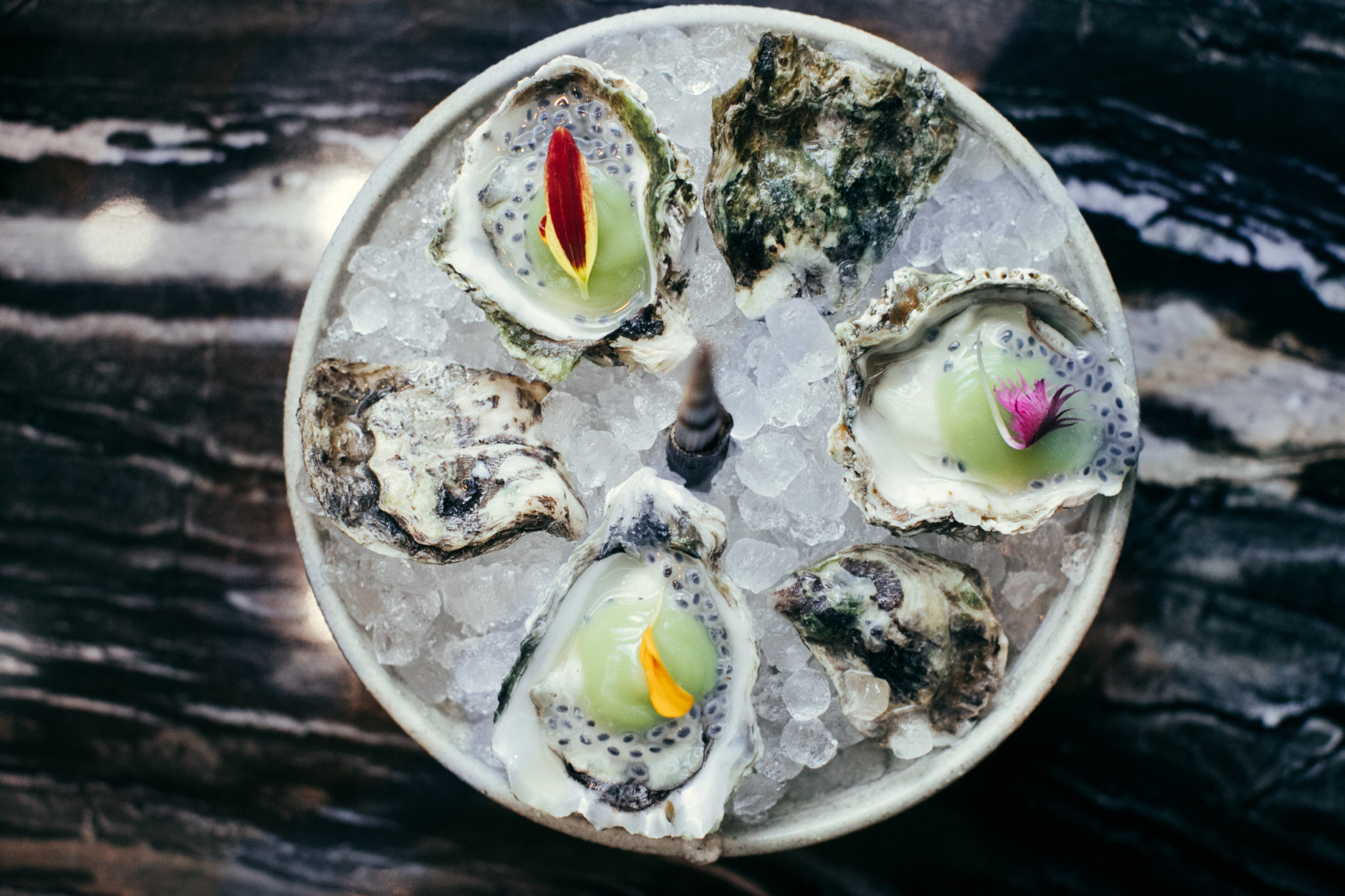 Dinner is served: Diplomat Prime, the renowned restaurant guided by executive chef Rashaad Abdool, remains a cut above when it comes to the steakhouse genre. But the fine-dining options hardly end there. Chef Michael Schulson’s spin on shareable Japanese cuisine has turned Monkitail (pictured: Kumamoto oysters) into a culinary destination without peer in this category. The chef’s tasting menu (10 selections and one dessert) delivers one artfully presented epicurean delight after another—cold dishes, sushi rolls, sashimi, meat and fish plates, robatayaki options. Bring your appetite—and your camera. Meanwhile, celebrity chef Geoffrey Zakarian brings his A-game to the coastal American cuisine served at Point Royal. Don’t miss the Sunday Royal Brunch, with its carving station, breakfast sides, shrimp and oysters, cheese and charcuterie, eggs, cereals, malted waffles and, if you can believe it, much more. 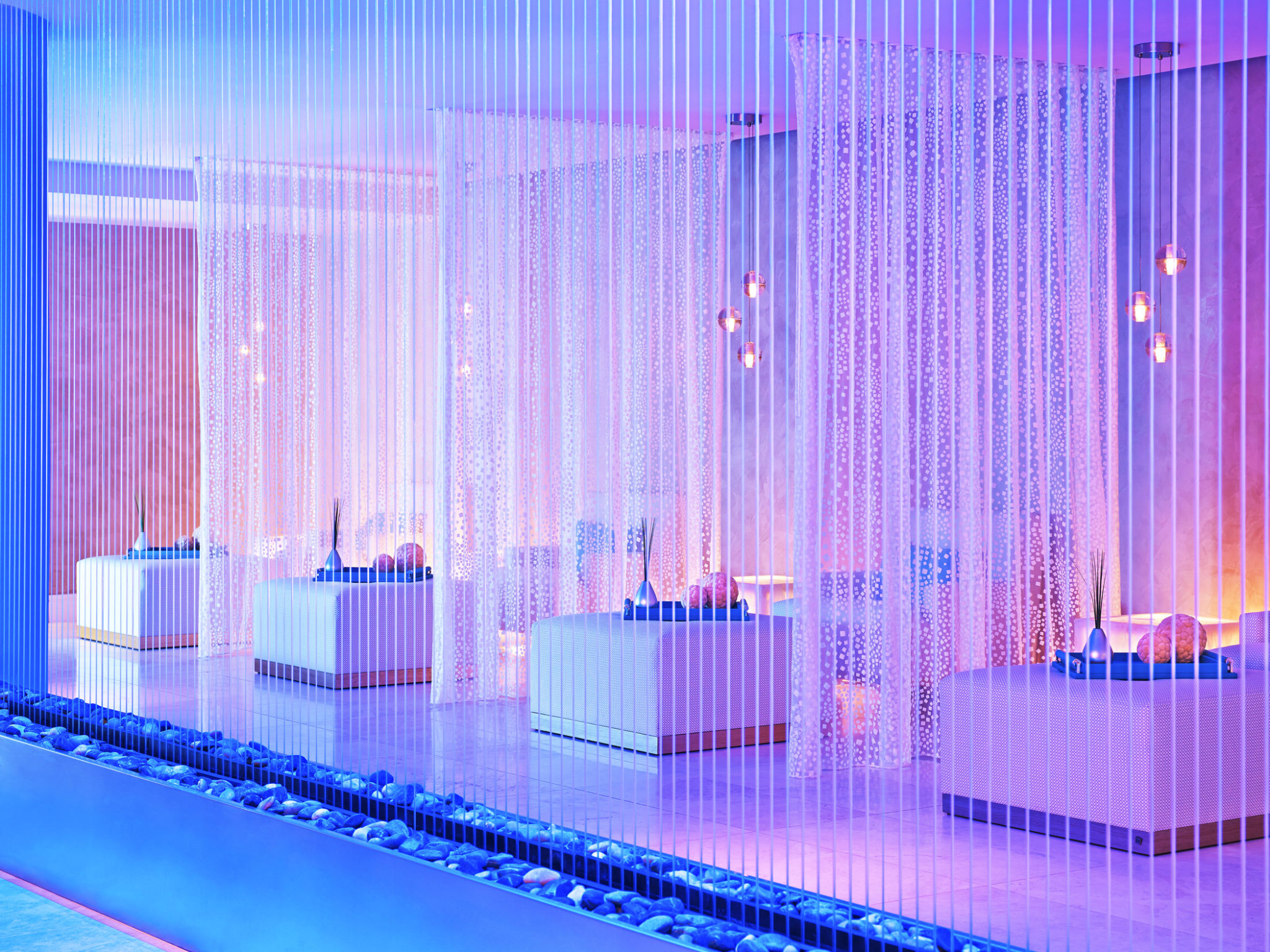 Your bliss awaits: The Spa and Wellness facility at The Diplomat received its own facelift, incorporating various elements (think water, earth, air, light, darkness, etc.) into a personalized journey that stirs the senses at every turn. The soothing sounds of a waterfall sanctuary in the relaxation room set the pre-treatment tone (patrons also can decompress in the sauna or steam chamber). From there, new services on the expertly curated spa menu of massages, facials and body wraps/scrubs take center stage, all of which perpetuate the theme of rejuvenating elements with treatments that incorporate aromatherapy, rose quartz crystals, oxygen, gemstone facial rollers, CBD oil and more. (Manicures, pedicures and waxing services also are available; plus, there’s a 3,200-square-foot fitness center that’s open all day and night.) 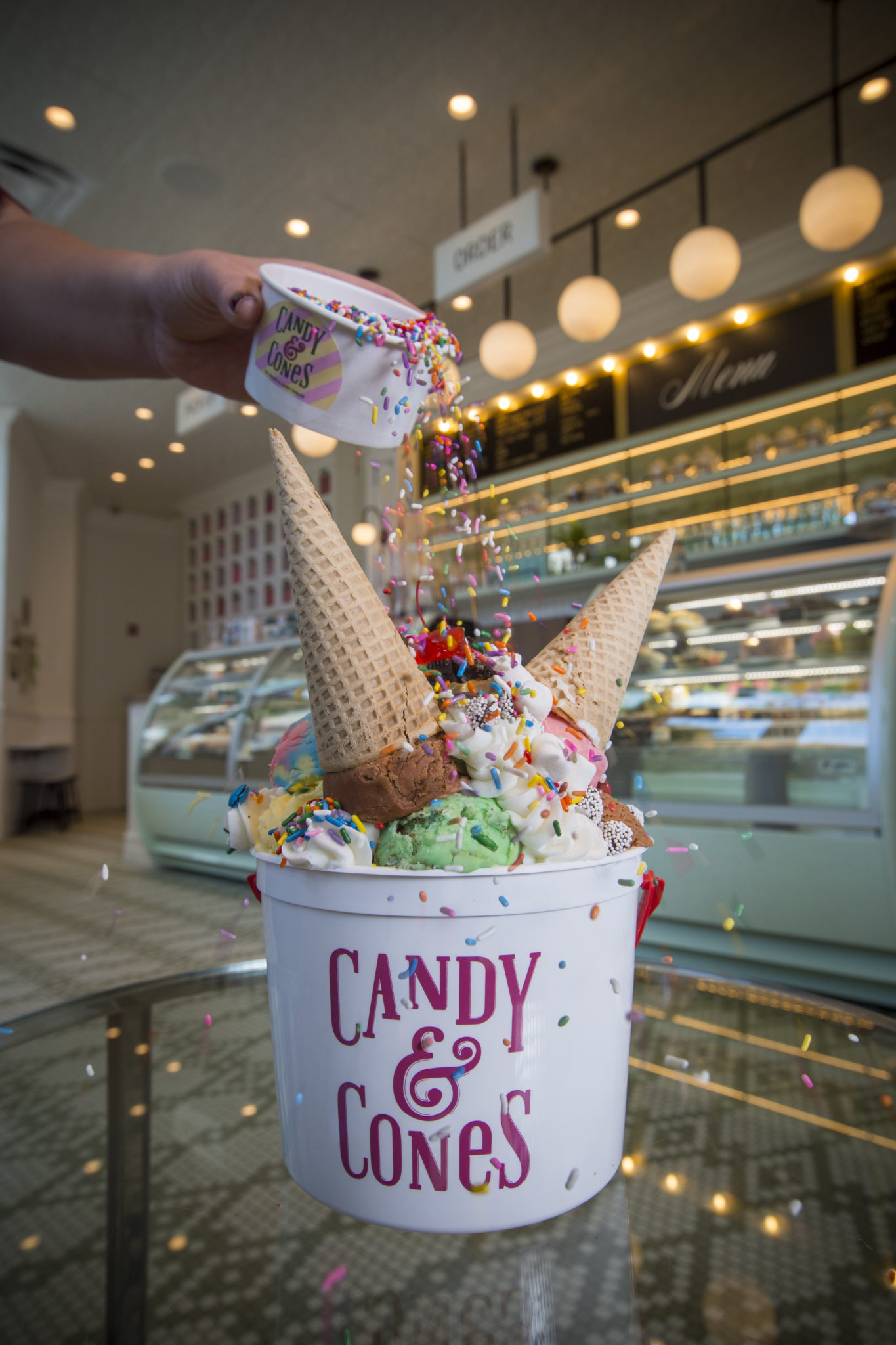 In addition: The Spa and Wellness team brings concierge-level services to guests with customized holistic programming (full-moon meditation, acupuncture, sunrise yoga and tai chi on the beach, etc.). … Counter Point, the gourmet grab-and-go complement to Point Royal, delights with a host of house-made pastries, sandwiches, fresh-brewed coffee and teas, and late-night bites. … Though Candy & Cones caters to kids, adults will be equally enthralled by the fresh-churned ice creams, cupcakes, cake pops—and a floor-to-ceiling candy wall with all your favorite sweet treats. … Hidden beyond the main dining room at Monkitail is a hip little karaoke space, Nokku, with a dark, speakeasy vibe. For those too shy to take the main stage, Nokku sports four private karaoke rooms. … The renovated first-floor area—with its multistory window treatments to capitalize on the natural light, modern tropical design (complete with towering palm trees), and abundance of spots to gather and converse (including the lengthy Hotel Bar overlooking the infinity pool)—is one of the most welcoming lobbies in South Florida.