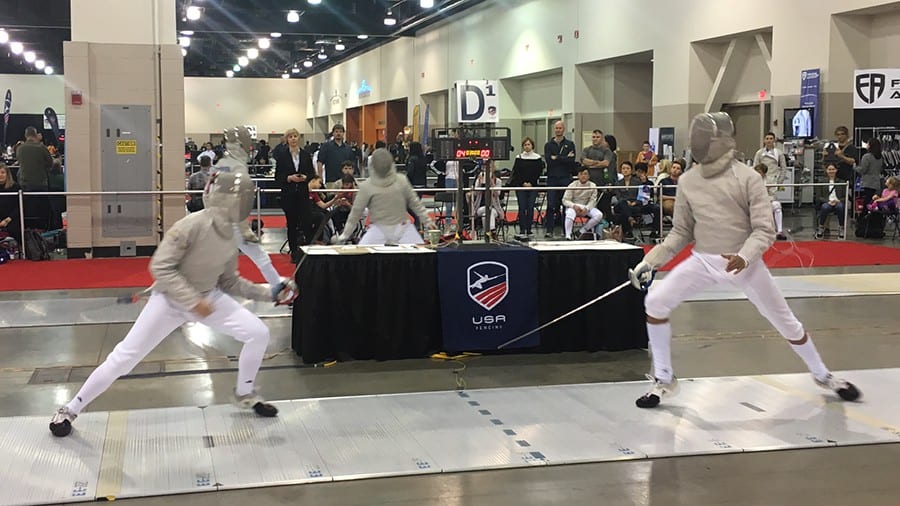 The Tip of the Sword

During a family trip to Italy in the summer of 2012, Jim Dodrill enrolled his son and daughter in a gladiator course, where they practiced sword-fighting. His youngest child, Grant, fell in love with the activity, and, after they returned, Grant joined an after-school sword-fighting group at North Broward Prep for the better part of a year. But that wasn’t enough to satisfy his appetite.

Grant began training at DuelLIFE Olympic Fencing Center in Fort Lauderdale from the Sabre Outreach Network. Though initially surprised by their son’s interest, Jim and wife Meredith quickly realized that Grant had some serious game. Within four months, he was defeating older and higher-level fencing students.

Today, the seventh-grader is ranked No. 1 in the United States in his age bracket (12-year-olds). Grant has since been joined by his sister, Brooke, a 10th-grader at North Broward Prep who pushes her brother (and vice versa) through some friendly sibling rivalry.

“Grant comes in with a lot more focus than a kid his age [typically does],” says Dan Berliner, Grant’s coach and a multiple winner of the U.S. Fencing Association’s national championship in the men’s saber division. “If you’re not practicing the correct movements and correct ideas, it’s hard to bring it all to task—no matter how athletic you are—once you get into a competition.”

When preparing for a match, Grant says he blocks out everything else and focuses only on his opponent, narrowing in on his strategy. He has learned the importance of being able to slow down and change his step instantly once he observes his opponent’s movements. “If you’re going really quick, you can’t always see what the other person is trying to do,” he says.

In the world of fencing, Grant admires Daryl Homer, the two-time Olympic fencing medalist, for his speed and agility—all while maintaining his tactical correctness. “I think it’s cool that he’s able to go crazy-fast and [still] be able to be perfect with all his moves,” Grant says.

Grant, who trains up to 20 hours a week, plans to fence through high school and college. Though he only has three seasons of training under belt, Grant already is thinking about his ultimate goal: the 2024 Summer Olympics.

“Grant definitely has the potential to go through the international circuit and work his way into national teams,” Berliner says. “All those things are well within his grasp.”

Monarch High School defeated Plantation High School in BECON-TV’s “School Duel,” 490-330, in the first game of this year’s competition, which lasts until June. The Knights will compete against Cooper City High in early March to determine if they will continue in the trivia game show. To watch the match against Plantation High, visit BECON-TV’s YouTube channel at youtube.com/becontv.

Margate Middle School recently was ranked among the top 10 middle schools in Vocabulary.com’s Vocabulary Bowl. The competition includes schools from the United States and Canada and ends in May. To learn more, visit vocabulary.com/bowl.

Amscot Financial awarded a grant to Coconut Creek High School’s band. The school was one of 14 nonprofit organizations in Florida to receive a grant. The money will assist the band with the costs of uniforms, transportation and instruments.