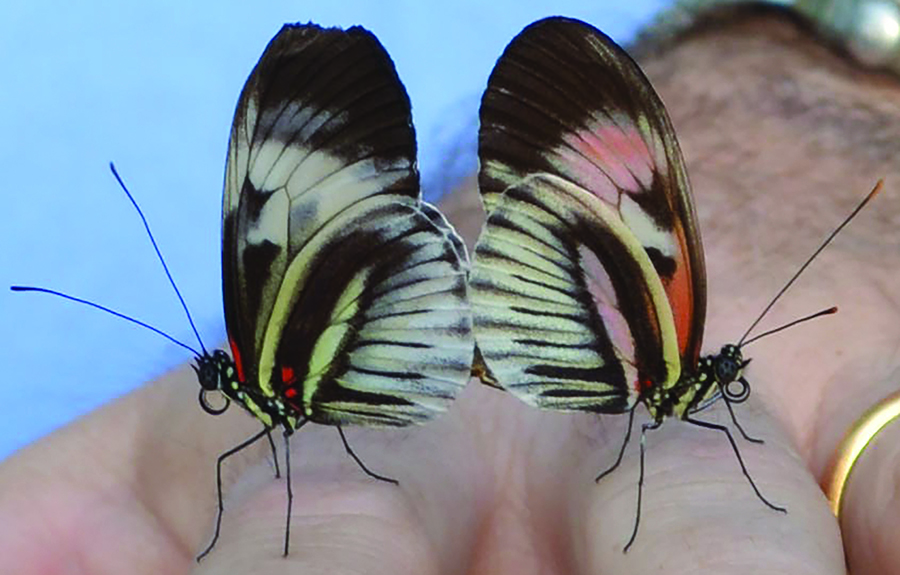 It would be easy to mistake Chad Barb’s workspace for a mad scientist’s laboratory, what with all the test tubes and Waterpiks—not to mention the containers filled with small fuzzy creatures. But there’s nothing evil happening inside a room where Barb performs day-to-day duties that only a handful of people around the world also tackle.

Just the opposite. As manager of the exhibits and breeding program at Butterfly World, Barb works with upward of 25 butterfly species (his favorite is the blue morpho) that produce about 1,000 to 1,500 pupa per week for display.

With Barb raising more than 60,000 butterflies a year, Butterfly World is the largest attraction of its kind on the planet, welcoming visitors near and far. He’s even experienced his fair share of celebrity run-ins. Jamie Foxx, Steve-O, David Bowie and Kate Gosselin have all traveled to visit Butterfly World to see what Barb gets to witness every day. “The whole camera crew was here. We kicked everybody out just for them,” says Barb, referring to Gosselin and her entourage of kids.

Barb’s daily duties include working with the groundskeepers to figure out what plants need to be moved or kept in public view before releasing newly hatched butterflies into the aviary.

It’s a job for which Barb has no degree or formal college training. After serving in the U.S. Navy, he went to school to become a chef—a career he soon realized wasn’t for him. In 2004, he applied on a whim for a job opening at Butterfly World and has worked his way up ever since.

“One of the guys that works here is a biologist. Another guy, he graduated high school and saw this as something to do,” says Barb, who has worked at the Coconut Creek attraction for 12 years. “But as long as you have some sort of interest, and you can build on that interest, you can do it.”

Captivated by his daily tasks, Barb admits that he frequently becomes so engaged in his work that he’s started to train himself to leave earlier to be with his 2-year-old daughter Chloe and his wife Jen.

However, Barb confesses that even on his days off, he often chooses to spend it visiting Butterfly World with his daughter.

“She’s been here a million times,” Barb says. “Chloe loves bugs. I put them on her, she could care less.”

As a child, he may have been interested in burning ants with a magnifying glass like most little boys (his family ironically established a pest-control company in 1980), but today Barb finds joy in donating pupa to local students to serve as educational tools.

However, his passion for the job goes far beyond just tending to caterpillars and butterflies. He used Mother’s Day as an example to explain his love for interacting with guests.

“It’s the busiest day of the year for us. A good day here is 800 people. On Mother’s Day, we do 5,000 people,” he says. “Families see the butterflies and know that they’re not allowed to touch them, but I can come over and put one on someone and it makes their day. It’s the best part.”

Watching Barb in action, he’s somewhat of a butterfly whisperer, snatching butterflies left and right and debunking the myth that touching a butterfly eliminates its ability to fly. “It’s a big lie,” he says, adding that it’s important to be gentle as their wings, which feel similar to tissue paper, can rip. Barb even got a pair to hang out on his nose while strolling through the windy pathway of Butterfly World’s big flight area.

The environment of the big flight area alone may be enough to keep anyone working there for more than a decade. Classical music sets a tone as if the butterflies are creating the symphonic sounds with each flutter, enhancing the overall ambience of the gardens.

From animals to exotic plants, a tour through the aviary elicits stimulation at every turn. Along with thousands of butterflies, the screened-in aviary is home to a variety of finch species and plants such as the unique passion vine flowers. Barb has even seen friendships form between species. “I remember a photographer got a picture of a butterfly sitting on top of a hummingbird’s head,” he recalls. “It wasn’t just for one day, they did it for a couple of days in a row.”

But one of the things that guests don’t normally experience is the aftermath of the butterflies’ two-week life span. “It’s part of a typical day. They die and we have to go around with a cup and pick them up,” Barb says, adding that his team was once able to keep a butterfly alive for nine months.

From collecting dead butterflies to cleaning up caterpillar poop, there’s not much Barb won’t do to lend a hand at work—except, surprisingly, going anywhere near the live tarantula exhibit. The self-proclaimed “butterfly, bird and plant guy” is a staunch arachnophobe and was quick to comment on the subject: “Those nasty things? You should see the fangs. Spiders are disgusting.”

But, of course, the eight-legged creepy crawlers aren’t enough to scare Barb away from his dream career. “I don’t plan on leaving,” he says. “You find a good job and you stay with it. There’s no need to ever leave.”