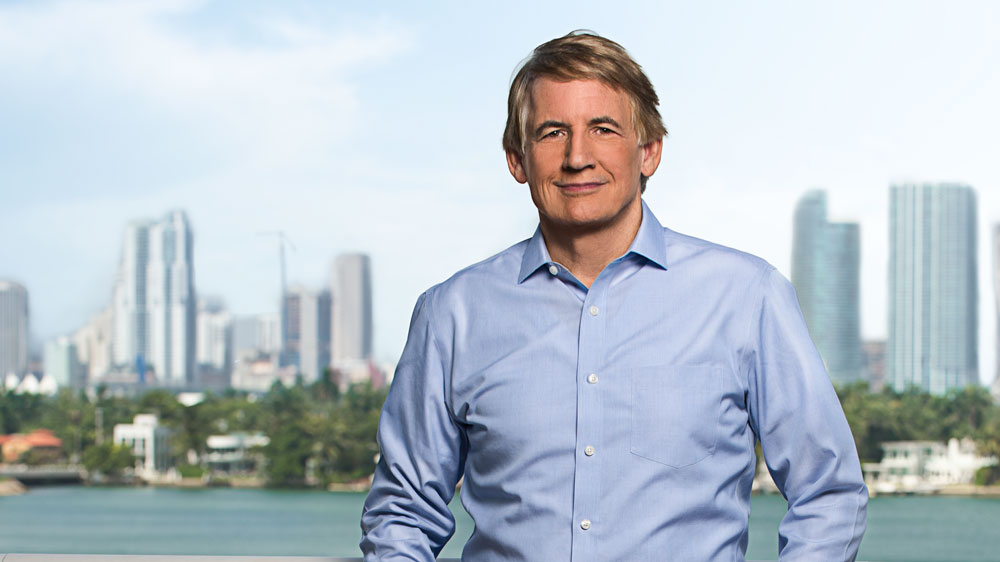 It’s been 25 years since Bryan Norcross was in the right place at the worst possible time for South Florida. The then-chief meteorologist at WTVJ became a lifeline for the public in August 1992, keeping anxious TV viewers and radio listeners in the know as Hurricane Andrew prepared to unleash its Category 5 fury on Miami-Dade County.

As evidenced by a recent signing for his new book, My Hurricane Andrew Story, time has done nothing to diminish their affection for Norcross and what he meant to them that night.

“I did a signing at Books & Books in Coral Gables, and the room was packed,” Norcross says. “People were still in tears talking about their stories. They want to express their gratitude, and they want to talk about what happened.

The curious part of Norcross’ story is that his career-defining date with Andrew almost didn’t happen.
Norcross started working at WTVJ in January 1990 on a three-year contract to help improve the NBC-owned station’s ratings. Norcross made it a point to make WTVJ the destination for hurricane information, branding its efforts “Storm Center.” But almost three years later, WPLG was still the area’s top station. The top bosses in New York told management in Miami to make changes.

“My contract was the only contract coming up [at the end of the year], and so, in June 1992, the news director, who was my boss, told my agent that she didn’t have any choice—she had to go in a different direction with weather,” Norcross recalls.

Norcross landed a job at CBS in New York and was set to fly there for a final meeting on Monday, Aug. 24. When Andrew, which had lost some of its steam the previous Thursday, gathered strength on Friday, Norcross put off his New York meeting and stayed in Miami.

It was the best decision he ever made.

Norcross was a teenager when he had his first brush with the power of a hurricane. His family had moved to the beach town of Indialantic after his father took a job as a NASA engineer at Cape Canaveral. As Hurricane Betsy approached the East Coast in 1965, Norcross took his board and went headfirst into the storm.

“I lost my board way out there, and it was only because I was a gymnast and I was in great shape that I was able to swim in against the current,” Norcross says. “It was scary getting in, but it was a thrilling ride. … It was like skiing off the top of a mountain. The drop was great.”

But even that wasn’t enough for Norcross to begin analyzing weather patterns. He was a math major at Florida State University, where he also spent time as a disc jockey before landing his first TV job at WFSU loading videotape machines. After working at TV stations in Atlanta and Denver, he served as news director for a Louisville, Kentucky, station. When that station’s weather personality quit, Norcross found his calling.

“I went out looking, offering more and more money to hire a meteorologist,” he says. “I realized that meteorology on TV really was the confluence of broadcasting and science. I thought, ‘You know, before I turn 30, I really ought to see if I can do it.’ ”

He returned to Florida State and earned a master’s in meteorology. After he graduated, Norcross snagged his first weather job in June 1980 with CNN in Atlanta. Eventually, he landed a job at Miami’s WPLG, where, in 1984, he launched a live segment called “Neighborhood Weather,” which combined the weather report with a human-interest story. Norcross spent time at HistoryMiami Museum while researching the segment. More than once, he came across photos of the destruction caused by past hurricanes in South Florida.

“Nobody was really thinking about hurricanes in the ’80s,” Norcross says. “I had in my mind that, if I were ever chief meteorologist and we had a hurricane, everybody [would] look at me and go, ‘What do we do now?’ ”

EYE OF THE STORM

When Norcross became chief meteorologist at WTVJ, he and his team highlighted hurricanes with the support of the station. They produced hurricane specials, formed relationships with the National Hurricane Center and local emergency management professionals, and installed a connection with radio station Y-100 to broadcast audio during a storm. Norcross also collaborated with the National Hurricane Center on a version of the “cone” imagery that’s now a staple of storm coverage.

Though they were prepared, the team’s biggest test came early on the morning of Aug. 24, 1992. By the time Andrew was finished churning through South Florida, 15 people were dead, more than 100,000 homes were damaged, nearly 200,000 people were left homeless—and more than $25 billion worth of destruction had been caused.

Norcross was on the air for all of it. Like the host of a telethon, he kept viewers and listeners informed for 23 consecutive hours. In his book, he wrote that the extended coverage damaged his vocal cords, which had the effect of actually “improving his broadcast voice.” For the families huddled in their hallways, ears glued to their transistor radios, his was the voice of calm amid the storm. He tracked Andrew’s path. He took phone calls. He directed people to shelters.

At one point during the broadcast, he recalled a book by L.F. Reardon about the author’s experiences in Coral Gables during the 1926 hurricane. The book recounted how he hid his children in a laundry tub and placed a mattress over it.

“I [told listeners], ‘OK, friends, here’s what I want you to do. I want you to take the mattress off the bed and get ready. When this gets bad, you’re going to go in the closet or in your safe place in the bathroom and get under the mattress and ride this out.’ Thousands and thousands of people ended up under mattresses,” Norcross says.

“That was the first smartest thing I ever said—in my life.”

About 2:30 a.m., Norcross had another thought. The roof of the station wasn’t made of concrete like the rest of the structure.

“On camera, we talked to the studio manager and said, ‘Can you set up a safe place for us to broadcast from that’s not under this roof?’ He and the crew whipped up a spot that was a storage closet,” Norcross says. “At 3:30, we did the move on camera. That was the second smartest idea I ever had because that prompted an untold number of people to take action.” 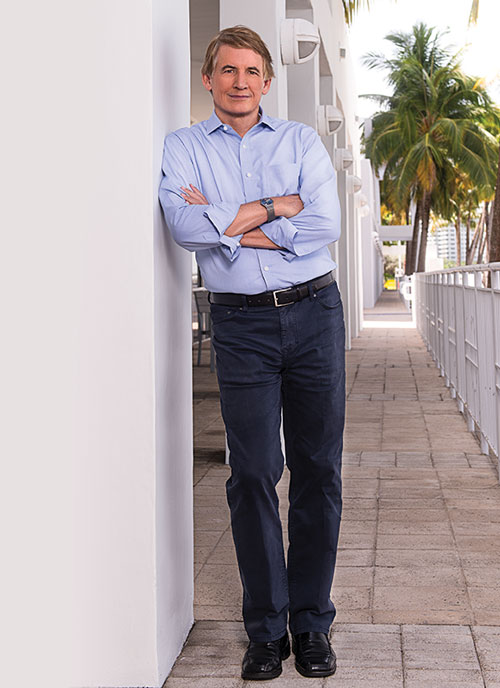 Two days after the hurricane hit, Norcross saw the destruction firsthand from a helicopter.

“We picked up Bob Sheets [then director of the National Hurricane Center] in Coral Gables and went looking for his home [in Perrine],” Norcross says. “It was really hard, dramatically hard, to figure out where you were because nothing looked the same. I never imagined the scale of it would be … just destruction as far as you can see. Everybody who went down there says, to this day, ‘If you weren’t there to see it, you can’t imagine it.’ ”

As he continued to report on Andrew’s impact, Norcross heard the stories of people who focused on his voice and relied on his advice during the hurricane.

“[One family’s] safe place was the bathroom, but the bathroom door was weak and battered with the wind; they had three people holding it, trying to keep it from breaking in,” Norcross says. “Somebody else decided to go in the closet, and, when they moved their mattress, they could see the sky. Every story is a bit different, but the fear factor and the sense of ‘When is it going to end?’—everybody felt that.”

He also received hundreds of letters, poems and cassette tapes from people expressing their gratitude, which he donated recently to the HistoryMiami Museum. He became known as the man “who talked South Florida through” Andrew. While Norcross and the station won multiple awards for its coverage, he turned down the New York job and renewed his contract with WTVJ.

“I was looking forward to the New York job, and there were a lot of components to it that just seemed fun,” Norcross says. “But I quickly realized that if I left at that point for some bigger job, it would be exploitive. Everybody else was still here trying to recover—all these people in South Dade. People were still living in tents eight months later.”

After the storm, he says, hurricanes “became my life.” Norcross became a “nonstop student” of building codes and procedures, a go-to expert on preparation, hurricane history and everything in between.

“That became a real responsibility—to be able to answer questions about hurricane protection and construction,” he says. “Back then, you had few people who could answer [those kinds of] questions.”

He eventually left WTVJ in 1996 and served as a hurricane analyst for WFOR and CBS in New York from 1996 to 2008. In the meantime, he wrote two hurricane almanacs. Since 2010, Norcross has been the senior hurricane specialist at The Weather Channel and the station’s senior executive director of weather content and presentation.

Though he says he’s in “quasi-retirement,” there’s more to teach about hurricanes. Today, everyone wants to know if or how climate change is affecting hurricanes.

“There were about three times as many Category 3 and above hurricanes in the first 60 years of the 20th century than in the last 50 years—more than 3-to-1 difference,” he says. “So the question is open: whether the warmer planet has affected hurricane tracks, or is it just a natural cycle that will go back to being the way it was.

“As the planet continues to warm and weather patterns change, will that change it back to where more hurricanes hit? We don’t know the answers to those questions.”

Norcross does know that the past informs the present, which is one of the reasons he wrote his book to coincide with the storm’s anniversary. With it, he’s continuing to inform the public on how to prepare for the next Andrew—just like he did 25 years ago.

“There’s nothing to say that this [month] there isn’t going to be another event just like [Andrew],” he says. “If we don’t remember what we did, what happened, what went well and what went badly, then that opportunity would be lost.”

To commemorate Hurricane Andrew’s 25th anniversary, Norcross guest-curated an exhibit at HistoryMiami Museum, documenting the storm’s formation and aftermath. The 5,000-square-foot exhibit includes video footage, photography, artifacts and more—some of it from Norcross’ personal collection of Andrew memorabilia, including cassettes from people who wrote songs about the storm.

“While we pay attention to the threat from sea-level rise and climate change in general,” he says, “we cannot take our eye off the ball of the yearly hurricane threat that has the potential of altering the way we live.”