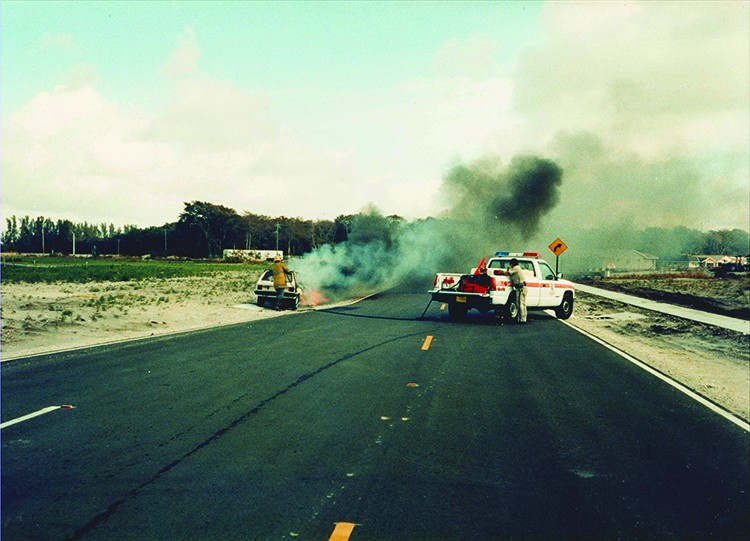 Capt. John DiCintio has protected and served the creek community for more than 30 years

John DiCintio is something of a local celebrity. Having lived in South Creek for about 30 years, the police captain regularly gets waves and honks from neighbors.

His popularity speaks not only to the practice of community policing but also to the fact that, as DiCintio says, officers are never quite off the clock.

DiCintio started his public service career in 1978 in Lake Worth as a parking enforcement specialist (“meter maid,” as he clarifies) and joined the police force a year later. Another year after that, he became an officer at the Palm Springs public safety department. When the chief, John Whalen, moved to Creek, he recruited DiCintio to join him. (Whalen remained chief until 1990.)

“It was nerve-wracking at the beginning,” DiCintio says of his early career. “But once you get your feet wet, you learn how to handle certain calls.”

Creek suited DiCintio. In those days, the city had a public safety department that covered both fire and police emergencies as the city was still growing and sparsely populated.

“North of Sample Road, there was nothing but barren land,” DiCintio recalls. “A few trailer parks. Very light commercial [buildings]. None of what it is today.”

Serving a population of around 6,000, the public safety officers pulled double duty.

“It was crazy,” DiCintio says. “We carried our fire gear in the trunks. We’d get a fire call, and the zone car closest to the fire station would get the firetruck. Where the fire was, that officer took off the police uniform, put the [fire] uniform on. Put the air pack on and waited for the firetruck to get there.”

DiCintio drove one of these firetrucks and was a member of the Firematics team—a competitive skills squad that battled other teams around the county for honors.

DiCintio moved up from training officer to corporal, sergeant and eventually lieutenant, a position that had him leading officers on patrol and then supporting officers behind the scenes. He became captain about five years ago.

“People come to you with problems. They don’t come up to you and say, ‘Hey, how are you doing?’ So you have to be patient,” DiCintio says of being an officer. “You’ve got to communicate. You have to listen to their problems and you have to do the best you can to handle it.”

The emphasis on communication speaks to the department’s policing style. The department’s motto is “We do not practice community policing. We are community police.” DiCintio says each officer contributes to that spirit by being friendly to residents and attending homeowners association and commission meetings.

“When we’re driving around, we stop and talk to people, see what’s going on with the neighborhood. People want to stop and talk. They love it,” DiCintio says. “[We ask] what their concerns are. If it’s their concerns, it’s other people’s concerns too, so you want to make sure everybody’s taken care of. … There’s always something we can do. If we can’t help you, we’ll send you to a person who can or a service that can help you. We want to make sure you’re satisfied with the service.”

Having raised two children in Creek (including a son who followed in DiCintio’s footsteps and is an officer in Davie), DiCintio is set to retire after 33 years of service.

“I’m going to miss it,” DiCintio says. “I’ve seen this department grow from a 30-man department to over 100. I helped hire a lot of people. It’s going to be tough to leave.”

And while he’s anticipating having more time to go on cruises and play golf, DiCintio has no plans to leave the city he loves.

“It’s like a little piece of paradise here. Once you come here, you go, ‘This place is unbelievable,’ ” DiCintio says. “It’s a really safe place to be. It’s a great place to live. That’s why I stayed here. I wouldn’t want to move anyplace else.”

This is the eighth in a series of articles celebrating Coconut Creek’s 50th anniversary.