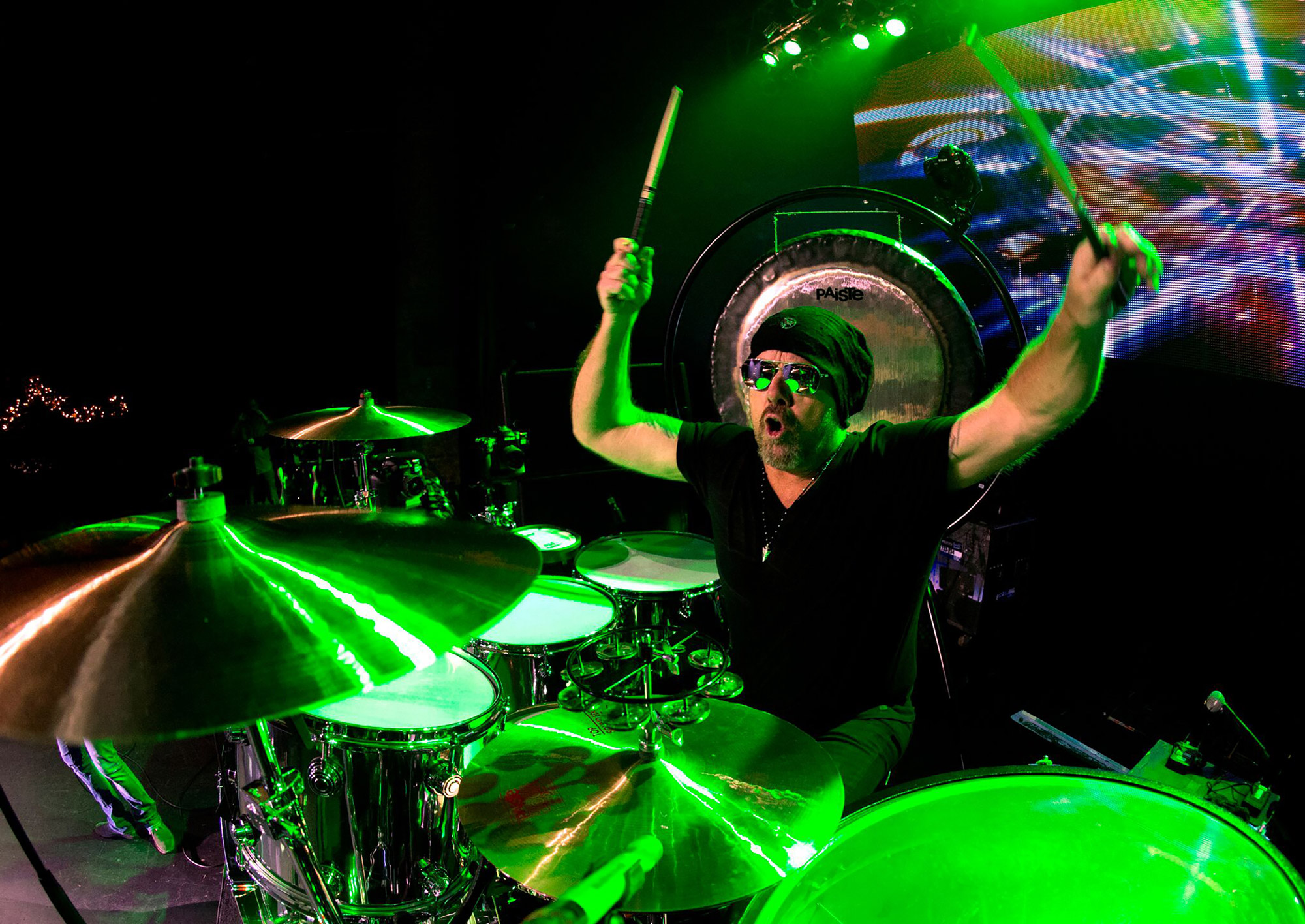 The original idea, Jason Bonham says, was to keep a house in England and buy something quaint in South Florida to see if he and Jan, his wife of now 28 years, liked living in America.

“Fourteen years later, we’re still here,” says Bonham of his family, which includes daughter Jaz and son Jager, both in their 20s. His wife calls the Delray Beach estate they bought in 2008 a fixer-upper, which suits Bonham just fine given his interest in home improvement.

“My dad was a bit of a builder,” he says. “When he wasn’t playing and touring, he was working on houses. So, I kind of follow him in lots of ways.”

In classic rock terms, that’s some understatement. Not only did the son of Led Zeppelin drummer John Bonham pick up the sticks—handling percussion duties, along the way, for the likes of UFO, Foreigner, and Sammy Hagar and The Circle, as well as incarnations of his own group—he joined his dad’s bandmates in 2007 for one of the most famous reunion concerts in music history. The one-off show at London’s O2 Arena marked the first time the remaining members of Zeppelin—Robert Plant, Jimmy Page and John Paul Jones—played a full-length concert since John Bonham died in 1980 (when Jason was 14).

Jason, whose November schedule includes a rock fantasy camp in Fort Lauderdale and a concert at Hard Rock Event Center that celebrates Zeppelin’s music, spoke to Lifestyle about his musical journey and, of course, his legendary father.

Early in your career as a drummer, did you struggle with the comparisons to your dad?

Back in the day, yes, I embraced it [to an extent]. But then, you have a little success, and you think, “Oh, I don’t need Dad now. I’m on my own.” That was me being young and stupid. It’s not until I was older and wiser that I realized, no matter what, John Bonham will always be my dad.

Nearly every drummer in the world has my dad in their top three drummers of all time. Why run from that? I’m very, very proud. When somebody says, “Man, you played that just like the old man,” that’s the greatest compliment that anyone can ever give me. He was the master. And he was playing that way by the time he was 23.

As the story goes, something happened during rehearsals for the 2007 concert at the O2 Arena that changed your approach to Zeppelin’s music. True?

I was having coffee with friends in London. They were asking me how rehearsals were going. At the time, I was frustrated. I wanted it to be so perfect, and certain things just didn’t sound right. I was so focused on trying to make it sound exactly the same [as his father]. My friends all talked to me about just being Jason. John will come naturally, they said. He’s there in the way that you play; be yourself first and let it come through.

That day at rehearsal, I wasn’t trying to play it like the album or a specific bootleg. I just played. And at one point, Robert and Jimmy and John Paul all looked back at me and went, “Where have you been? You’re finally here.” That was so encouraging. That’s the way I approach the songs now. This isn’t what Dad did. It’s what he might have done.

Are you disappointed there haven’t been more shows with the remaining members of Zeppelin?

I’d be lying if I said I wasn’t disappointed. Being with those guys on stage that night, I just didn’t want it to end. But I was more than happy to be asked. I’m so glad we rehearsed and got to do it to the ability that we did. Still, we never went through the whole set once until the day of the show. … That was one night. Imagine what it would have been like after 10 or 12 shows?

During the “Led Zeppelin Evening” shows, you’re known to get emotional on stage when talking about your dad. What comes over you at those times?

It’s still that thing of when you’re a 14-year-old boy and you lose your hero. Occasionally, my own son and I can go back and forth a bit—then again, he’s 6-foot-4 and can beat the hell out of me, so I have to be careful.

I never reached that point with my dad. Would we have butt heads over stuff in later years? I’ll never know. So, he was on such a pedestal.

But on stage, I am my emotions while talking to the audience. It’s only then, when I’m playing his music, that I feel like, “You know what? This is very special.” Especially, when the crowd goes crazy. They give me so much love and support for something that was created by my father. It became way more about everyone’s love of the music, everyone’s experience with Led Zeppelin, and not just my story. Who am I to stop that?

[Professionally,] I’m probably the hardest now on the guys in [the Led Zeppelin Evening] band because I’m representing the family—and the music of Robert, Jimmy, John Paul and my dad.

Have you ever participated in a rock fantasy camp?

Never. It was always kind of bizarre to me. But this is local, and I know the players, I know Joe Perry. So, now I’m intrigued. I hope to meet some good local people, and maybe we’ll end up being friends. Who knows? I might end up having new people I can jam with.

Isn’t it every guy’s secret dream to be a rock star?

These days? I don’t know. Honestly, I think sometimes I would have liked to have been the creator of Facebook.

What: Take the stage with Jason Bonham, Aerosmith guitarist Joe Perry and a host of veteran musicians for this once-in-a-lifetime chance to channel your inner rock star. The four-day camp promises musicians and vocalists of all skill levels the opportunity to jam and record with their rock heroes.

What: The son of John Bonham leads his stellar band on a journey through the catalog of one of rock’s most influential groups. The thrilling multimedia show is certain to include some of Zeppelin’s most iconic hits.

Contact: Tickets start at $25. Visit myhrl.com or ticketmaster.com for details.