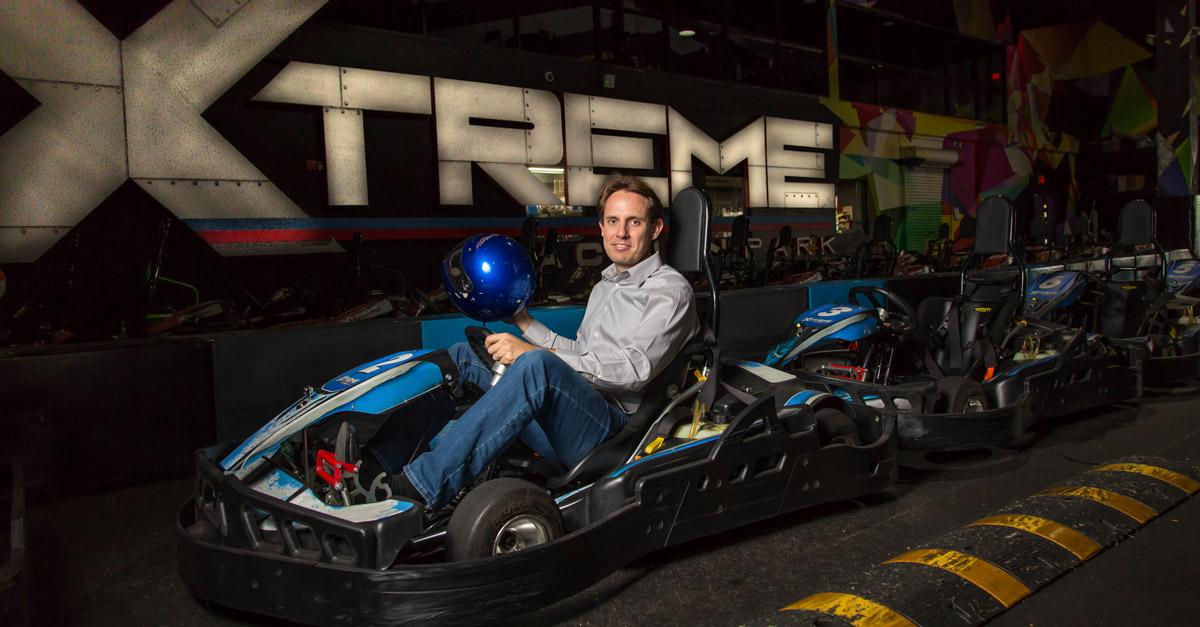 If you’re looking for an entertaining venue for team building, Xtreme Action Park awaits. Want an adrenaline rush? Compete with your coworkers on a half-mile go-kart track. Want something intellectually challenging? Try solving puzzles to get out of an escape room.

Want to hit the lanes and enjoy an adult beverage or two? There’s a bowling alley and fully stocked bar. Want to test your balance and agility? There’s a ropes course that hangs above the arcade. In addition, there’s plenty of event space, ranging from conference rooms to a roller rink that can transform into a 2,000-person gathering place.

Xtreme’s location is strong for corporate events since the Fort Lauderdale Uptown area employs 70,000 people. It’s a pioneer in what’s called the “Envision Uptown” movement. A 2014 Urban Land Institute study says the area near Commercial Boulevard and Cypress Road has a good population density but needs to transform into more of a live/work/play neighborhood. Xtreme Action Park definitely fits the definition of play. Behind Xtreme are three partners who each brought something to the table:

Goldfarb’s company was a supplier to Xtreme Go Kart before it closed and also had provided games for Dezer’s Miami Auto Museum in North Miami. He told Dezer about the 340,000-square-foot building going on the auction block back in 2014 and Dezer won the bid.

They converted part of the building into office condominiums. Bekins Van Lines took 110,000 square feet and Goldfarb took 20,000 square feet for his business. Then Goldfarb became involved in the roughly 125,000-square-foot first phase of Xtreme, which kept and overhauled the go-kart track. Dezer owns about 80,000 more square feet, which includes the museum with his cars and a trampoline park, which is a tenant.

He expects many mixed martial arts and professional athletes to use the gym and has lined up three trainers, who will be owner-operators: Henri Hooft, a top professional trainer for martial arts fighters; Mario Sperry, a top jiujitsu coach; and Tony Villani, whose XPE Sports in Boca Raton is a top performance-training site for NFL players and collegians preparing for the draft.

There’s synergy among Xtreme’s individual elements. For example, Goldfarb expects Xtreme to get exposure when sports networks cover big-name athletes training there. There also will be some crossover activity because some football players enjoy mixed martial arts and some MMA players want performance training.

“What’s unique is it will fall under one roof here,” Goldfarb says.

The partners were encouraged by the success of the first phase of Xtreme, which included the go-kart track, bowling, the arcade, a ropes course and Bazooka Ball, a combat game with elements of laser tag and paintball. They managed to double their initial forecast for revenue. The second phase included leasing out space for a trampoline park, doubling the arcade space and opening the museum, roller-skating rink and the escape rooms.

Dezer said he was attracted to the building by its sheer size. “Everything I do, I like to do big,” Dezer says. He needs a lot of space for his growing car collection.

Dezer, who also owns 15 acres of land in Las Vegas, said his love of cars goes back to when he was a teenager in Israel and he got into trouble once for taking a spin in a car that wasn’t his. Among his earliest purchases were a Vespa scooter, a Harley Davidson motorcycle and a 1949 Plymouth.

His car museum at Xtreme has a huge collection from the movies, including “Back to the Future” and every James Bond movie, he says. Admission is $10 for Florida residents. Dezer says he also has 250 micro cars, which is the world’s largest collection. He also has a big collection of Vespas and just spent $500,000 on 31 more.

Parkinson, who has offices upstairs at Xtreme, is bringing his technology chops to the business, including integration of the various systems for the go-karts, such as point of sale, signing the waiver and selecting race times. That will also help give more functionality to Xtreme’s mobile app, which allows live views of races.

Xtreme already gathers a lot of analytics, such as accidents and average lap times. Drivers have to pay for an $8 annual license that also comes with a helmet liner. The systems then track them, so drivers who crash a lot are automatically slowed down.

Dezer was asked if Xtreme could be replicated elsewhere. “Yes, after we do this and have a couple of good years running, of course. We would be stupid not to do it in other places.”

One potential site is Dezer’s Las Vegas property. The preferred site for the new pro football stadium that will house the NFL’s relocating Oakland Raiders, at Dean Martin Drive and Russell Street, is a block from his land. “Something like this when they go to the game could be great,” Dezer says.

Location: 5300 Powerline Road, Fort Lauderdale
Hours: Open 365 days a year starting at 11 a.m. daily and closing at 10 p.m. (Sunday-Thursday) and midnight (Friday-Saturday). Parking is free.
Website: xtremeactionpark.com
Phone: 954.491.6265
Current special: Get Dad on the track this Father’s Day. With kids in tow, dads can receive one free Pro Race session, a one-day race license, a head sock and a souvenir cup with a fountain drink.