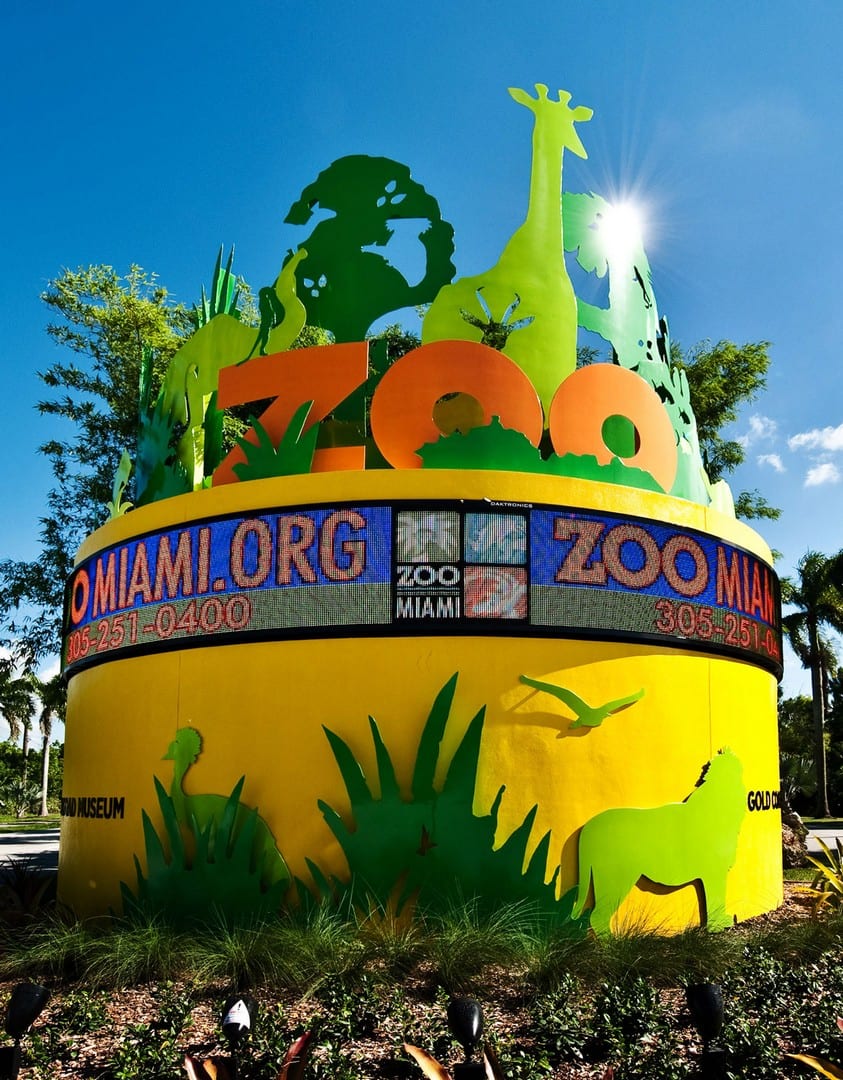 What strikes you first about Zoo Miami is its size: 340 developed acres on a 740-acre parcel, with 2,000 wild animal inhabitants. Its newest exhibit, Amazon and Beyond, is by itself 27 acres, larger than the average U.S. zoo. Zoo Miami is so large that multi-modal transportation systems are required to shuttle people around: It has a monorail, tram tours and cycle rentals.

For our visit we decided to rent one of the four-seat cycle carriages which allows you to peddle along the path, climbing on and off at will. We had a lot of ground to cover because we wanted to see all the “big” animal groups, namely the lions, tigers, bears, gorillas, elephants, giraffes and rhinos.

We also wanted the four-seater for the sun protection its roof provides; the last time we came to Zoo Miami it was called Metro Zoo, and it was short on shade. We were pleasantly surprised to find Zoo Miami now lush and shady, and also equipped with “water-play” areas to cool kids off.

Moreover, Zoo Miami is halfway through a 20-year master development plan aimed at transforming it into an entertainment destination, a sort of Disney Land of Animals, with hotels, restaurants, water rides and themed attractions. The first phase took place in 2003 with the Wings of Asia exhibit, a massive enclosure with more than 80 species of birds (and more than 350 individual birds).

The most recent of the new exhibits is the Amazon And Beyond, a $50 million showcase of tropical animals from the Americas (think jaguars and anacondas) with three separate “forest” areas. We found the Cloud Forest building fascinating, with its collection of lizards, snakes, reptiles and insects—especially the Goliath Bird-Eating Spider and the Giant Waxy Monkey Frog (both horribly large).

But it was the Atlantic Forest that supplied our first zoo “moment”—that moment when everyone in the family goes quiet as they experience something enthralling. In our case it was the Giant River Otter display where, up against a glass partition, we were just inches from a clan of these hefty animals as they huddled together for an afternoon nap, the otter “kids” taking forever to settle down as they snuggled against their sleepy parents.

As entertaining as the otters were, we had come for the big game, and we finally arrived at the African Exhibits area. Here we saw again what makes Zoo Miami so exceptional—enough space for the big game to roam and stretch their legs. While this doesn’t always give visitors the intimate experience that old “jail-cell” zoos did, the natural habitats are not only more humane, but create the impression that you’re seeing the animals in the wild. Watching the gazelle and zebra and elephant in their open areas makes you feel like you’re on safari.

Nor do the habitats take away all of the intimate moments between visitors and animals. Sometimes the interactions are spontaneous. At the African lion exhibit, while most visitors can watch the King of the Jungle across the safety of a moat, there is a cave that lets you get closer. Inside the cave I watched a small girl pressing her face against a glass wall, arms akimbo, while a fully-grown lion pressed his face against the glass on the other side. She squealed in delight; he strolled off nonchalantly.

Other interactions are more scripted, but still sweet. The ultimate experience for our family was the giraffe feeding station. Here you walk up a plank to a wooden platform where you can purchase a bowl of greens or veggies ($3 or $10 worth) to hand-feed the giraffes. Because you are elevated, their heads are right there with you. During our visit we fed the zoo’s born-in-captivity baby giraffe, along with a couple of adults. There is nothing quite like the feeling of a giraffe’s long grey tongue as it licks the greens from your hands.

There are other Zoo Miami animal interactions to be had including the Indian Rhino Encounter, the Pelican Feeding and the always-popular Camel Ride. As for the other wildlife, it is seemingly endless, and again there are all those moments—when the lowland gorilla majestically saunters in the late afternoon sun, or when a gang of Cotton-top Tamarin monkeys chase each other through a maze of branches, or when a clouded leopard stretches in a tree that is six feet away. We connect to our animal selves in a way that is otherwise impossible.

Zoo Miami is an extremely family-friendly place with endless activities for kids, including the air-conditioned Dr. Wilde’s World of Discovery and a Children’s Zoo equipped with a carousel. In the end, it is first and foremost a world-class enclave of mysterious wildlife from around the globe, and that makes it a sensational way to spend a day with your children.