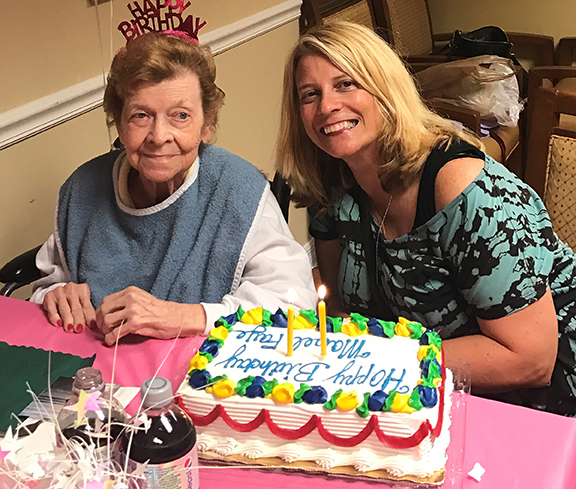 My mother was always organized. Everything was in its place. She talked about her last wishes in case of her death. In her safe deposit box, she had specific instructions about what she wanted me to do when she died. She already had written her obituary, and attached the photo she wanted to accompany it.

She had told me many times that if she had a stroke or a debilitating illness, she hoped to pass away quickly. That didn’t happen. Since October 2013, my mother, Mabel-Faye Solomon, has had a progressive decline in her mental and physical health from vascular dementia, the second-most common dementia, which often coexists with Alzheimer’s disease. Vascular dementia is caused by a series of mini-strokes, most of which are not outwardly noticeable. What are the signs? She had difficulty signing her name and figuring out the process of what was required to pay her bills. My mother had been a teacher for 30 years, so that was unusual behavior.

In 2012, as fate would have it, she requested that I accompany her to a lawyer. She wanted to make sure she had everything in order “just in case.” For a few hundred dollars (costs vary per attorney), legal documents were drawn up. It wasn’t just a will; she had done that earlier. These were essential documents that would allow me to make important financial and medical decisions on Mom’s behalf.
Little did we both know that this would be crucial when I had to become her “voice” when she wasn’t able to decide for herself if she should have her hip and leg operated on after she fell. Or how her money would be handled to pay for her care when she needed to be placed in assisted living—and a host of other important financial and medical decisions.

The key was that Mom still had the full mental ability, and, therefore the legal capacity, to make the decision that I would be the trusted source to make decisions on her behalf if she became unable to do so. When a court needs to be involved to declare that the person should be represented (aka guardianship), it’s an expensive and lengthy process.

My mother still “knows” her daughter, and she thanks me every day for helping her navigate her changing world. I thank her for ensuring that some of the challenges we are both facing because of this devastating disease are less daunting because of her advanced preparation.

The following legal documents have allowed (or will allow) Michelle to make important decisions on her mother’s behalf. Consult an attorney for specific details of what may be right for you and your family.