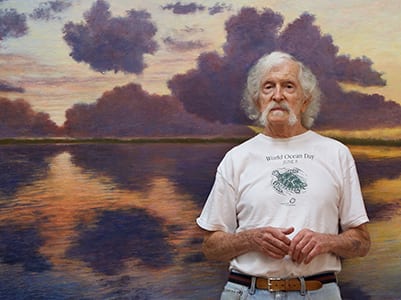 1 You were one of the first faculty members at Florida International University when the campus opened in 1972. What brought you to Miami and specifically FIU? I was in Miami before FIU was created. I came here in 1963 via Florida State University. I taught at the University of Miami in the humanities department and then moved over to Miami Dade College where I worked at the Miami Art Center. I was the assistant to the director and the artist-in-residence. I eventually applied for a position at FIU and started teaching on the very first day the university opened.

2 How did you become the founding director of the art museum on the FIU campus that would later become the Frost? Frank Wyroba, chairman of the art department at FIU at the time, hired me in 1972. We had taught together at Miami Dade College and he knew about my experience at the Miami Art Center. In the interview process, he asked if I would be willing to get release time from teaching to start a museum for FIU when the time was right – and that happened in 1976.

3 You’ve had a love affair with the Everglades for decades. What is it about this area that touches you artistically and spiritually? I started going out there with my son when he was very young. We would fish and go on adventures. It became my muse. My son is now 45 years old… I’ve been doing it for a while.

4 How long have you lived in Pinecrest and what’s your favorite part about living here? I had visited a friend in the neighborhood and was impressed by their old ranch-style home. In 1976, when one of those homes came on the market, my wife and I made an offer. We have been very happily ensconced in it ever since. A few years ago, we found ourselves up against a change in zoning, but we were able to go around getting signatures and meet with the council to bring about a resolution. Citizen input and security is both very attractive and important. Pinecrest is great not just because it offers privacy and peace, but also accessibility to most needs. I enjoy going to Pinecrest Gardens, the farmers market, Fairchild Tropical Botanic Garden and Montgomery Botanical Center.

5 Your widely acclaimed exhibit at the Frost Art Museum, “Jim Couper: There Are No Other Everglades in the World” just closed. What did you hope to accomplish with this exhibit and were your goals met? I hoped the paintings reached a large audience and wanted the audience to realize what a treasure the Everglades are. I think it worked. I had at least six lectures and subsequent meetings as a result. I think the message got through.

6 Tell us something that no one knows about you? Years and years ago, long before Pinecrest and FIU, I did a 100-foot mural for a movie shot on location in Coconut Grove called “Lady in Cement,” which starred Frank Sinatra and Raquel Welch. The support crew liked it so much that they cut it up and each crew member took a piece home.

7 If you had to leave our readers with one fact about the Everglades that stands out for you, what would it be? The Everglades are in great peril and need all the help they can get.