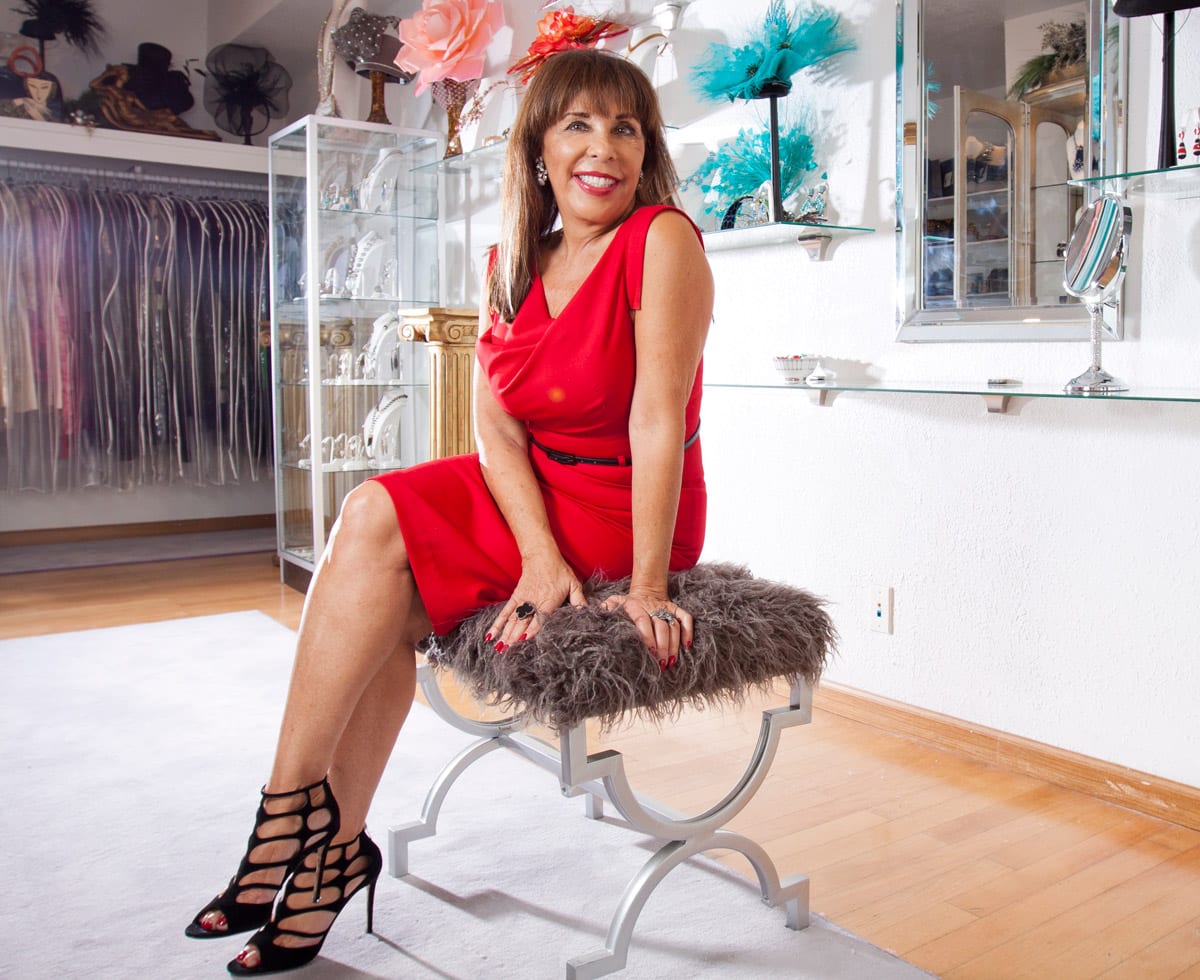 In the thick of the minimalist fashion movement, glamour reclaims the spotlight at Lulu’s Vintage, the new Fort Lauderdale boutique carrying decades of designer jewelry and extravagant hats.

“We’re not for the faint of heart,” says owner Laurie Davis as she repositions a pearl and citrine Iradj Moini necklace in its case. “Isn’t this fabulous?”

The bureaus are open and lit, revealing sparkling pieces from as early as the 1800s that she bought at private estates throughout the years. The contemporary pieces, like the Iradj Moini in the window, are one-of-kind. (“You’re not going to go into Bloomingdale’s or Neiman and find this,” she adds.) The hats and fasteners lining the wall spare no drama, artfully incorporating jewel tones, tulle, feathers, flowers and even animals—bees, seahorses and a little white bird are among the surprising touches. A 1960s hand-beaded shift dress hangs on one of two racks of vintage designer party dresses and evening gowns.

Before Lulu’s opened at 3332 N.E. 33rd St. in December, it was on Michigan Avenue in Chicago for almost 15 years. “When I was a little girl, I knew I would have a boutique; I just didn’t know what it would be,” Davis says. When the former stylist saw Julia Roberts accept her Academy Award in a vintage Valentino in 2001, it clicked.

Her clients, many of whom were society girls, helped create an immediate buzz, she says. For years, women traveled from neighboring states for the perfect hat for the Kentucky Derby. Christina Hendricks stopped in to shop for her role as Joan on AMC’s award-winning drama series, “Mad Men.” The jewelry has also been worn on Fox’s “Empire.”

Almost two years ago, Davis relocated to South Florida, her home in the ’80s. Her posh little shop minutes away from Lauderdale-By-The-Sea features a floor-to-ceiling mirror and a hat bar. “Back in the day when you would buy a hat, you were seated in front of a mirror and the hats would be put on you,” she says.

Davis’ own style, “sophisticated-with-an-edge,” is reflected in her merchandise: ostentatious and daring, yet elegant and timeless. “Right now, the one piece I’m lusting after is this one from the 1930s, extremely rare,” she says, trying on a gold cuff encrusted with tropical-colored stones. “I’m out of my mind for it.”

To The Moon Marketplace
2205 Wilton Drive, Fort Lauderdale; 954.564.2987; tothemoonmarketplace.com
For an unconventional gift, visit this eclectic shop with shelves of old-school candies, global snacks and novelty toys. There are more than 13,000 items in stock, including more than 70 chocolate-covered selections and even more pure-chocolate treats.

Blossom Street Florist
7101 W. Commercial Blvd. Tamarac; 954.247.9826; blossomstreetflorist.com
Roses are a classic way to say “I love you,” but this family-owned shop takes it a step further, making elegant custom arrangements and tailor-made gift baskets that can include gourmet snacks, jewelry, bath products or stuffed animals.