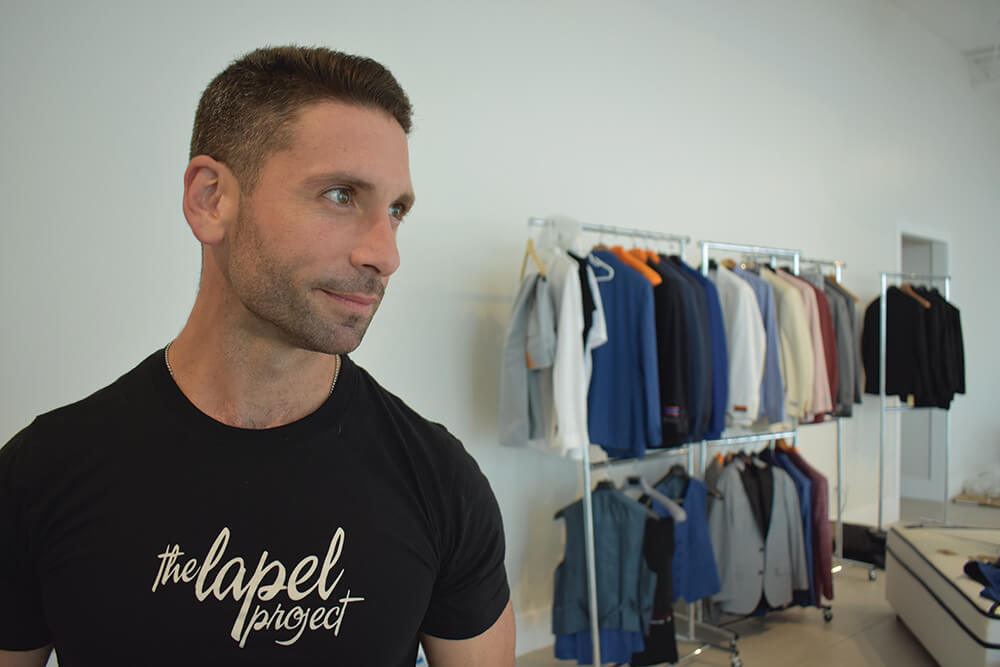 Something didn’t quite fit for Sebastian Garcia when it came to wedding-day attire for his male clients.

Unlike suits, tuxedos have two lapels—slick, razor-edged flaps of fabric that line both sides of a jacket. That excess material can result in hundreds or even thousands of dollars added onto a price tag.

“A tuxedo is so impractical to buy,” the owner of My Grooms Room says. “But when you rent, you’re wearing something used on one of the most important days of your life.

“There’s never been a third option for men. It’s always been rent or buy, but that puts many people in a bind.”

So Garcia, who has spent most of his life working in menswear fashion design and consulting, decided to take matters into his own hands. He sought to create removable lapels that could easily be sewn onto a suit when needed.

“It took a lot of trial and error and a few messed-up suits,” he laughs. “But it worked. It’s totally new and innovative and it looks great.”

Garcia, who runs My Grooms Room from Sartori Amici, his menswear store located in The Falls, started a company called The Lapel Project, which uses lapels to transform suits into tuxedos, making them appropriate for weddings and other formal occasions.

“Everybody needs a suit,” he says. “Every once in a while, when you need a tuxedo, now you don’t have to surrender to an ill-fitting rented garment.”

In October 2016, Garcia’s lapels were featured on ABC’s “Shark Tank,” in which entrepreneurs pitch ideas to a group of investors in hopes of gaining funding.

“It was at a small business expo in South Beach where I saw the ‘Shark Tank’ audition stand,” he says. “I had samples in the car and I sort of pitched it on a whim. When I got a call back sometime later, I was shocked.”

On the show, Garcia partnered with investor Mark Cuban.

“It was an incredible learning experience,” Garcia says. “But now the work has really begun.”

From suede and leather, to flashing LED lights and technicolor flowers, Garcia’s lapels are custom-made, depending on need and occasion. There is also a selection of collections that feature traditional solid-color lapels. Most average $50 to $60 a set.

“They’ve become a vessel for personal expression,” he says. “Customers can send over color palettes or images, and we’re able to work with them to create exactly what they want.”

Since appearing on “Shark Tank,” Garcia’s lapels have been worn in weddings across the globe and shipped to every continent. Beyond their affordability and convenience for weddings and formal events, Garcia wants to expand The Lapel Project for use in schools and charitable organizations.

“Parents are always scrambling before prom trying to get everything together,” he says. “They’d save so much money with lapels instead.”

Given The Lapel Project is still in a start-up phase, most business is done through its website. While customers can order a set of lapels from anywhere in the world, most of Garcia’s products are made in Miami, especially the more-intricate custom orders.

“Sheriffs wear pins on their uniforms and superheroes wear symbols on their chest,” he says. “Now we can wear exactly what we want on ours. It’s exciting to be a pioneer in this and see how far we can take it.”