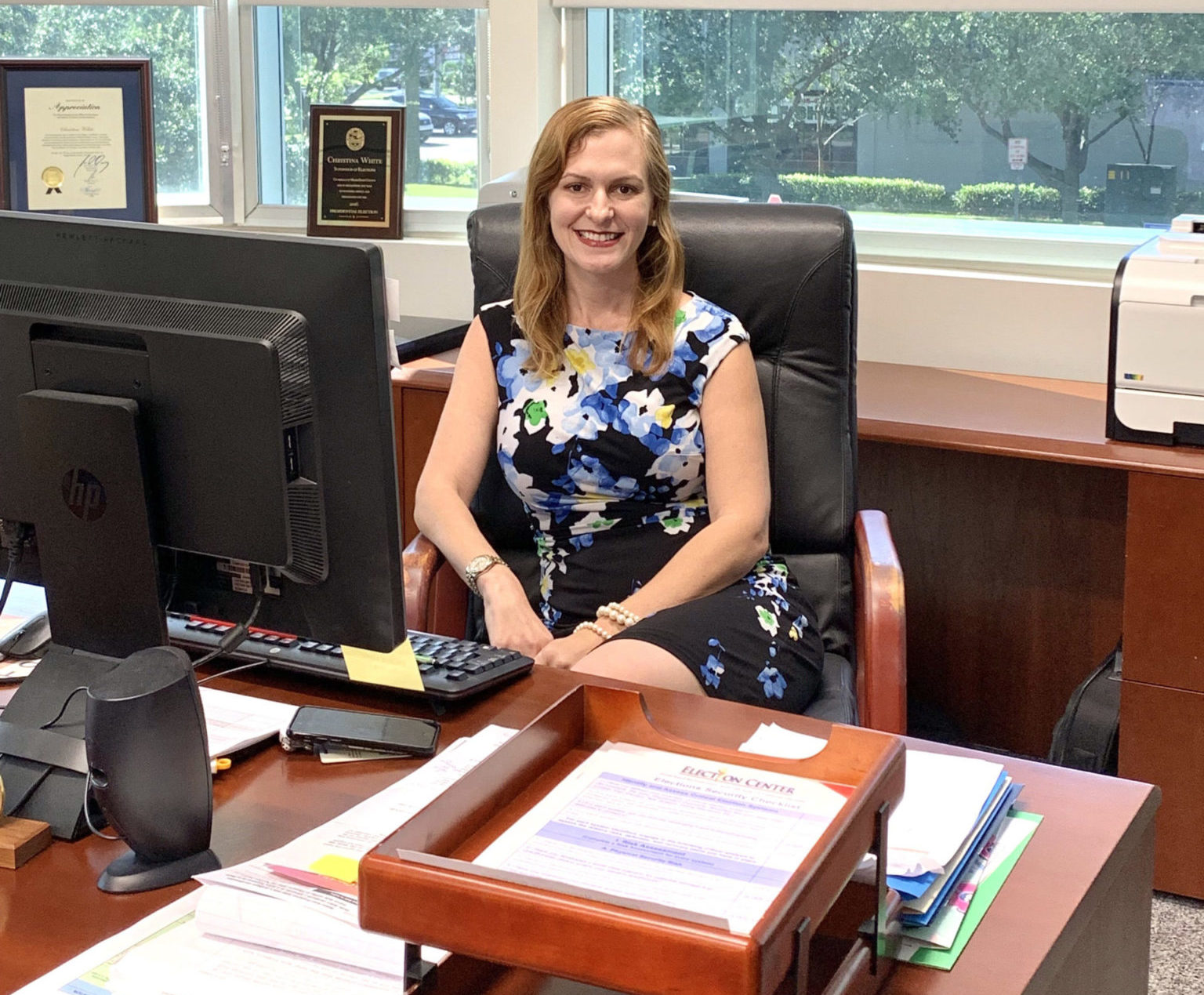 Amid COVID concerns and other unique challenges, battle-tested Christina White, supervisor of elections for Miami-Dade, has her team ready for Nov. 3

A window of voting that has the potential to be the most complex in United States history is open, but you wouldn’t know it from the calm exuded over the phone by the woman who oversees the largest elections operation in Florida—and seventh largest in the nation.

Christina White, supervisor of elections for Miami-Dade County, acknowledges that her job, which includes the management of 864 precincts on a typical Election Day, is no walk in the park. But her strategy remains consistent, whether preparing for a midterm primary or a pandemic-era presidential cycle.

Be prepared for anything.

“Always have a contingency plan,” says White, who graduated from Florida International University with an environmental science degree and worked in the county’s environmental resources management department before moving to elections in 2006.

It’s a philosophy that has served White well since being appointed to the position by Miami-Dade County Mayor Carlos Gimenez in October 2015 (after a transition period with prior supervisor Penelope Townsley, who retired, White officially took over in May 2016). While there is a laundry list of duties involved, the simple answer to what the supervisor of elections does is this, she says: “To ensure that elections are fair, accurate, secure, convenient and accessible to all voters.”

In the run-up to what promises to be a voting cycle unlike any in the modern era, White touched on some of the issues on which she and her team are focusing leading up to Election Day on Nov. 3.

Of the many elections in which you’ve been involved over the past several years, is there one important lesson that stays with you?

In presidential elections of the past, there were some significant lines with people waiting. What I realized is that there needed to be a more mathematical approach to our resource allocations. We reviewed the voting process from voter check-in to placing the ballot into the tabulator.

We used to deploy equipment based on the number of registered voters at each of the locations, but that wasn’t it. What we found was that when voters put their ballot in the tabulator it took the same amount of time. The variable was the length of the ballot. Voters will spend most of the time in the privacy booth, so infusing the length of the ballot into our equipment allocation has made a huge difference to keep those lines moving.

You must do the math.

Are you expecting thinner lines for this election because of COVID-19 concerns?

Voter participation and the way that they are going to vote is a bit unpredictable. In the primary election, we had record turnout in early voting, which is something that was very unexpected. With this trend of voting by mail—and by the way, that trend was occurring anyway; I think COVID just accelerated it—it’s really a matter of where you’re going to put your resources. Are you going to transition those resources to vote by mail? My answer to that is that I need to overdo it in all areas. For this election, even with possibly more vote by mail, we will have 33 early voting locations. That’s more than we have ever had in the past.

To that end, what kind of staffing manpower do you need for an election like November’s?

I have 105 full-time employees; from there, the operation expands or contracts based on the size of the election. Most people don’t know that we are actually running 20 to 25 elections a year. But, for the presidential election, we’ll have 5,000 poll workers and another 1,000 temporary employees [to complement the full-time team].

The connection between mail-in ballots and potential voting fraud has been raised this election season. What are your thoughts on that contention?

We are a paper-ballot state, and we have been since 2008. Before that, it was all electronic voting with touch-screen voting units, and that was met with some skepticism. In Miami-Dade County, hundreds of thousands of voters have been voting by mail successfully for many years. The idea that there is any sort of mass voter fraud is something that is overblown; there is very little evidence that surrounds that. I have been working in this department for 14 years now, and I can count those instances probably on one hand.

What about voting in person to make sure your vote is counted—even if you’ve already mailed it in?

Before you show up at the polls, check the status of your ballot on our website. (Note: Visit miamidade.gov/global/elections/home.page; click on “Vote by Mail,” and there’s a link to track your ballot status).

It’s frustrating to you and others voting in person when you get to the front of the line, and we tell you that we received your ballot and that you are not able to vote in person. The poll worker is going to tell you the department has received your ballot, and you will not be able to vote [again]. It’s a live database, so whichever ballot comes in first is going to essentially lock the other ballot out from being accepted.

Your vote will not be counted twice.

`{`Voter turnout`}` obviously `{`will be`}` much different in November. It was a 28 percent total turnout in August `{`for the primaries`}`. I wouldn’t be surprised if the upcoming election is at 80 percent.

Regarding potential backlog at the post office: What happens if ballots do not arrive on time?

We work very closely with the post office. I have checked in with them several times since hearing all the stories about the post office and what’s happening on the national level. I have been given every assurance that election mail will continue to receive priority just like it always has. We send ballots out first class (33 days before the election) and, in Miami-Dade, we have postage paid on the return of the ballot, which is business class, so that prioritizes it. I’ve been given an assurance that election mail will not suffer due to any kind of changes that may be occurring in the post office.

What I would say to the voter is do not wait until the last minute. With such an important election, don’t wait and put your ballot in the mail the weekend before the election and expect it to get to us. [After you receive the ballot], vote quickly, and mail it back as soon as possible. Then, if we need to contact [a voter] for some reason, there will be time to do that.

How are you preparing for the added layer of voting amid COVID-19?

We were able to have a test run in August [during primary voting], and we did well. My senior staff and I debrief after every election, and we look at ways to improve future elections, so we really looked at what we did to keep people safe. The feedback that we received from our in-person voters was that they felt safe. Poll workers were diligent about wearing gloves, masks and face shields. They were wiping common touch points frequently. We had social distancing stickers on the floors. We asked voters to sanitize their hands when they entered the polling locations, and everything was wiped down after each voter.

The lesson we learned is that we need to do whatever it takes to have the voter feel safe. We did a good job with that, and we’ll do the exact same thing going into November.

What’s the biggest concern for you?

From the operational perspective it is getting our workforce ready. Mobilizing thousands of poll workers with a small window to get everyone trained and ensure that they are ready to serve our voters on Election Day. We did see attrition in the March [presidential primary] as well as in the August primary. We’re hoping that we are going to be able to staff all of our precincts and early voting sites, and be able to deal with the incoming vote-by-mail ballots, which I’m sure will be at historic numbers. We had almost 424,000 people vote in the August primary, and, as I predicted, over 60 percent voted by mail. We knew that was going to be the case going into the pandemic.

What kind of turnout are you anticipating in Miami-Dade?

It’s obviously going to be much different in November compared to August. It was a 28 percent total turnout in August. I wouldn’t be surprised if the upcoming election is at 80 percent.

In 2016, the Palm Beach County elections office suffered a ransomware attack that they didn’t detect for years. Given the fear of foreign actors and cyber-attacks, what has Miami-Dade done to step up its election security?

That has always been an element of election planning. I have the benefit of the county’s Information Technology Department, which is staffed with experts in IT and cybersecurity. We’ve received grant money from several different locations over the last couple of years, and we’ve invested it in monitoring systems, detection software, and different products that would help us in any denial-of-service attacks. So, we have put significant resources into that area. I can say with confidence that we have never had any evidence of hacking or compromise—and I want voters to feel confident in that.

On a personal level, what do you find challenging about your position?

Certainly, there are a lot of stakeholders surrounding what we do—voters being one of them, as well as candidates, campaigns and political parties. It is difficult sometimes because everyone has an opinion about how you should do your job.

What is the one thing that keeps you up at night?

There is zero tolerance for error. … I think I should put a period there. End of sentence. I don’t need to even elaborate. [White laughs]

There are some changes coming down the pike in Miami-Dade County concerning your position, correct?

Of the 67 counties in Florida, 66 elect the Supervisor of Elections. Miami-Dade is the only county that has an appointed SOE. I will be the last appointed SOE for Miami-Dade County. In 2018, voters chose in favor of making not just this office an elected position, but also the police chief and tax collector. So, this office will be on the ballot in 2024, and that will be the first elected supervisor in Miami-Dade County’s history.

It’s very difficult for me to think of doing any other job. I feel so rewarded doing this. But I guess my answer is that I want to get through 2020, and then I will take that question more seriously.