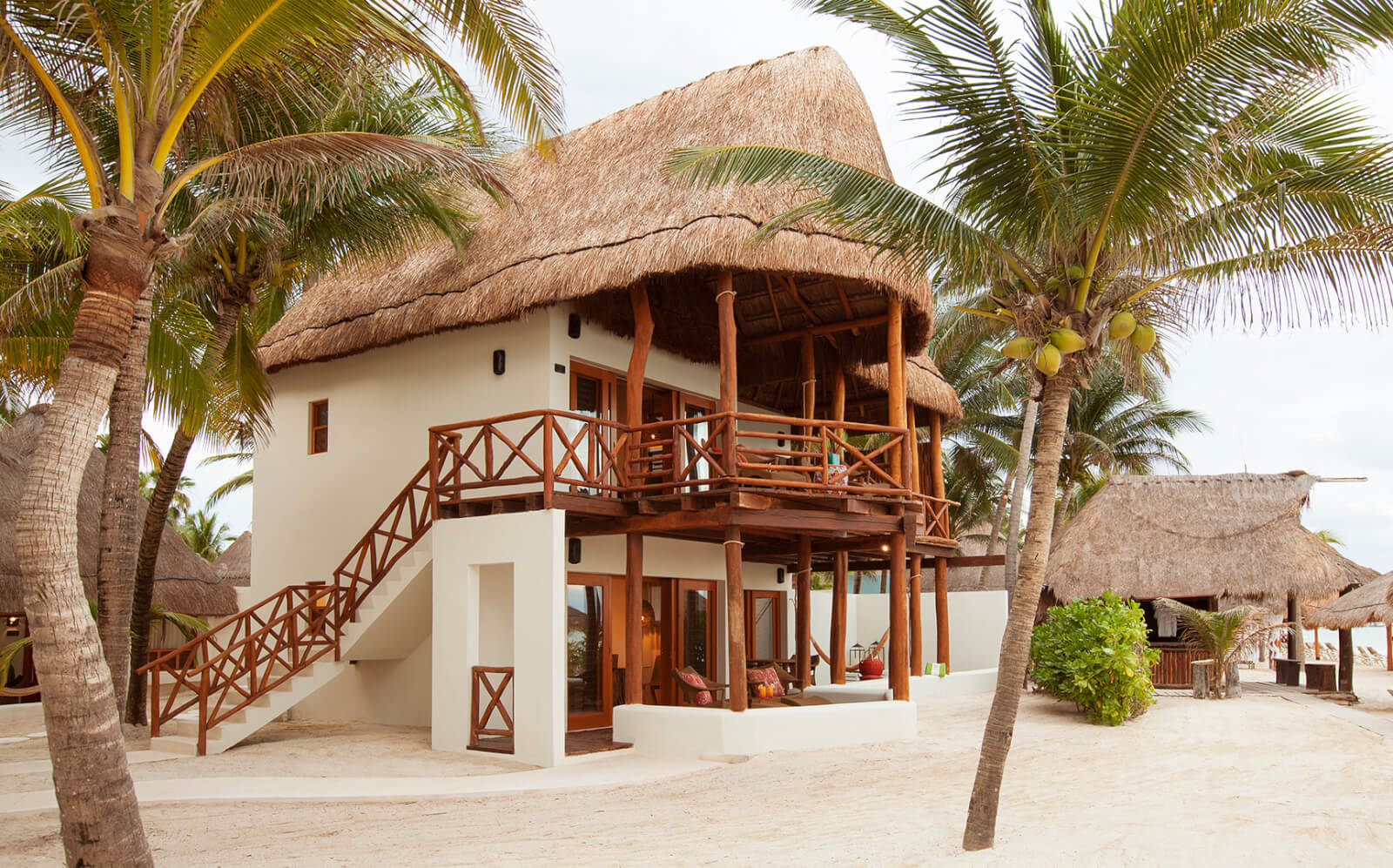 The finest spot in my thatched-roof bungalow was a white crochet hammock on the wooden porch. Only 10 feet from the sparkling Caribbean Sea, I was within constant earshot of crashing waves.

Every free moment was spent swaying in the hammock, where I read my book or nodded off, stirring only to reach for a cerveza or take in the scenes unfolding in my “front yard” in Playa del Carmen, Mexico. The sun-kissed couple walking hand-in-hand down the shore. The gaggle of children shrieking as they chased each other on the sand. The bikini-clad gal soaking up the rays, earbuds in place.

It was all rather voyeuristic, which is part of the charm of Mahekal Beach Resort. Even though my weekend palapa was built right on the sand, it seemed almost invisible at times to passersby. Outside of my neighbors to the right, who waved and lifted their beers at me from their private plunge pool, I felt like I was in my own world at this beautiful, bohemian village.

Had I been confined to the bungalow, I wouldn’t have argued. It felt like home, my own piece of paradise. Outfitted in soothing neutrals, the bungalow had Wi-Fi but no TV—a pleasing escape from the traditional hotel distraction. But with four swimming pools, a seaside hot tub and new Maya-inspired spa, there were plenty of other soothing locales.

Relaxation was easy, but it was the enrichment I was after, which Mahekal was delighted to offer.
Mahekal, “magical” in ancient Mayan, is deeply rooted in tradition. It dates back 50 years—a local Mexican family built six thatched-roof palapas on the beach for backpackers to rent. The profit went toward creating more bungalows, eventually growing to more than 100 little havens, nestled between the Riviera Maya jungle and Playa del Carmen’s longest stretch of beach.

The palapas range in size, view, amenities and layout—mine, as mentioned, was an individual ocean front with a traditional rustic roof and native tropical hardwood furniture—with options such as two-level casitas, treehouses, beach houses and penthouses. One might have a plunge pool, and another an outdoor shower. The interiors feature traditional Mexican decor by local artisans, such as silk rebozos (long, flat shawls) from the state of Michoacán and pottery from Oaxaca.

Each facet of the resort presents an ode to its roots, even after the three-year, $16 million renovation that culminated March 2016. Mahekal’s common areas, co-designed by local Mexican architect Hilda Espino, enlist traditional, handcrafted accents to complement the modern luxury.

The emphasis on authenticity extends into the kitchens at the resort’s four restaurants, where regional specialties always appear on the menu. Fuego y Cantina, a farm-to-fork restaurant with a Tulum-style wood-burning oven, featured salmon in a squash blossom sauce, following a black cod carpaccio with watermelon and mezcal. Mexican and Latin American wines were paired with each course, but margaritas also were welcome additions.

The most memorable meal was one I helped to cook. I followed a stone path through lush palm fronds to the secluded Mayan Culinary Casita, where the chef—who only spoke in his native Mayan—cooked grouper caught less than two hours earlier (as I learned through a translator). An indigenous Maya shaman lit incense and blessed the group, which was hungry for the main course, Fish Tikin-Xik.

We sipped xtabentún, a Mexican liqueur made from anise seed and fermented honey, as the chef prepared the feast and the translator tossed out bits of history about the reasoning and origins of what we were eating. The grouper, cleaned of its head, tail and spine when I arrived, was lathered in achiote paste (a blend of spices) and bitter orange juice. It was arranged on a banana leaf, where bell peppers and onions were added. Once wrapped, it was steamed over a heated pit oven in the soil, thick plumes of smoke quickly enveloping the fish. As that cooked, a massive pot of lime and chicken soup started simmering. Served in brown ceramic pots, the soup focused on simple, natural ingredients—chicken breasts in broth, with herbs, eight freshly plucked limes—and three small bowls of separate spices for those who wanted to flavor to taste.

While I relished planning my day around such bold meals, there was plenty more to do.

I discovered the cenotes of Chikin-Ha—sinkholes in Cancún from collapsed limestone bedrock, exposing an underwater cave—led by staff at the Mahekal Vida Aquatic Dive Center. Protected in wetsuits from the cool water, the group breathed through snorkels as we gazed under the water, which was deeper and more magical than could be determined from land.

There was time to unfurl during a morning yoga session on the beach, as well as in Boli’s Bar, a cozy lounge named after Mahekal’s star concierge, Boli. Full of games and outfitted with pool tables, it’s the spot to mingle with hand-crafted, fresh-pressed juice cocktails.

At night, activity picked up again. I strutted along Quinta Avenida (Fifth Avenue), a quick cobblestone walk from the resort, to shop, eat and, later, dance.

Unbeknown to me, Revive Spa was where my Mexican adventure would come full circle. The building itself was round—an important feature in Mayan philosophy, which believes circles create peace, universal unity and balance. The intimate, low-lit space has a palapa roof that calls on the resort’s indigenous feel, heightened with its use of home-grown products. I indulged in the 80-minute signature treatment, “Revive 5 Senses,” where my therapist tapped into all five senses using traditional techniques. A few were piqued during the Tierra Maya body exfoliation, a cocoa and honey mask mixed with warm oil and a copal cleanse (a tree resin that comes from the copal tree in Mexico, used as incense during lunch earlier in the day).

As I rehydrated, sipping on coconut water in a state of Zen, dreaming of retreating to my palapa to read, in walked Gabriel, one of the friendly faces of the concierge staff and a native Mayan. He sat in the middle of the room and led a ritual, burning incense and sharing the deeper meaning of the full-body treatment. He noted how much it means to him to explain his culture—he took on the role of tradition keeper at the resort—which strongly values the balance of the mind, body and spirit.

“The sun and the beach is a gift,” he says, as we walk outside, our eyes adjusting and gazing toward the vast sea ahead. “We have to take advantage of it.”

Mahekal Beach Resort
Where: Playa del Carmen, Quintana Roo, Mexico
The specials: For those looking to propose to their loved ones, look no further than Amor Aficionado. The program is customizable, but offerings include Marry Me Margarita, a cocktail on the rocks garnished with a diamond; Pampered Pleasures in Revive Spa’s couples cabin, where a bride-to-be can get her nails done before the surprise proposal; and Hearts on Fire, a proposal featuring rose petals and lanterns lighting the way to a private beachside fire pit.
Moon Over Mahekal is for true starry-eyed travelers interested in everything from the full moon and meteor showers to solar eclipses and comets. Starting at $439 a night, guests will stay in a private palapa with an outdoor moon shower or plunge pool and enjoy Star-tini welcome cocktails, couples massages, dinner under the stars, and a “Once in a Blue Moon” snorkel trip.
Contact: 877.235.4452; [email protected]