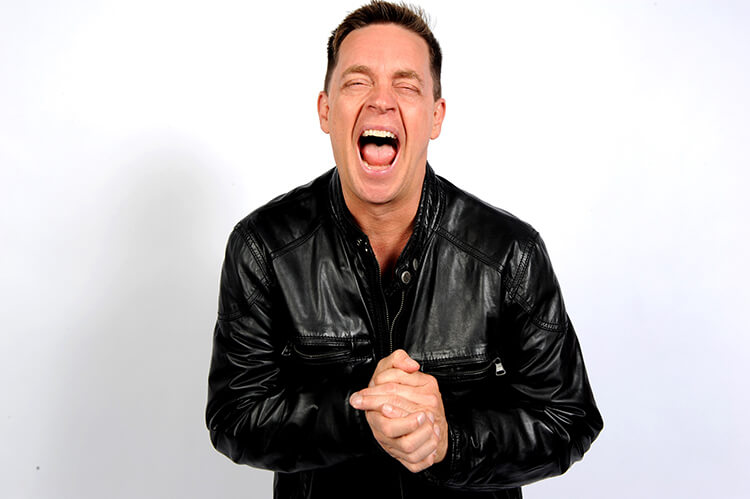 As a parent to three daughters over the age of 12, including one in college, Jim Breuer doesn’t pull punches when doling out fatherly advice in the “Me Too” era.

“Here’s what I tell them,” says the comic, 50, who rose to fame on “Saturday Night Live” in the late 1990s. “If someone is inviting you to a room, they’re not going up there to talk politics and religion. Don’t be stupid. Keep yourself out of circumstances that could cause harm.

“It’s like saying, ‘Let’s go to a drug-infested neighborhood at 3 in the morning with [money] hanging out of our pockets.’ Is it right that we were mugged? No, but holy crow, use your head.”

When it comes to his stand-up career, Breuer has been following his heart as much as his head for the past decade-plus, a transition that has earned him a new and loyal generation of fans. Instead of playing up the material that first brought him fame—impressions of Joe Pesci on “SNL” or the stoner character he personified in the 1998 cult movie “Half Baked”—Breuer now shares stories about his wife, children and family that draw laughs and resonate at the same time. He even finds the humor in darker subjects, like being a caretaker for his father (who suffered from Alzheimer’s disease and dementia before dying in 2014) or dealing with his wife’s ongoing battle with cancer.

Breuer, who launched his comedy career in Florida (his parents moved to Palm Harbor, north of Clearwater, when he was in high school), says he played everything from tiki bars to Elks lodges back in the day. He returns to the Sunshine State this month for nine dates—including a March 10 show at Seminole Casino Coconut Creek. He recently spoke to Lifestyle about his comedy evolution.

Your current stand-up is rooted in such heart-on-your-sleeve candor about your family. Was it a purposeful transition, or did it happen organically?

Once my kids started checking out the internet, it made me realize that—oh, my gosh—they’re going to look me up online [and see my stand-up]. Back then, [my material] was a lot of nonsense and cursing, and just a juvenile vocabulary.

I had fallen into a trap. I worked very hard at stand-up early in my career, up until about mid-“Saturday Night Live.” Then, it became, “Oh, you’re the Joe Pesci guy. Do Joe Pesci.” Then, “Half Baked” came out in 1998, and it was like, “Oh, you’re the stoner guy. Talk about pot.” And, yes, I would sell out places—but it was like I was the Grateful Dead of comedy.

As a dad, I realized that I have a real responsibility here. Do I want to be the pot guy? Do I want [the parents of] my kids’ friends going, “Don’t hang out with Jim’s kids; he’s on pot all the time.” That was the persona, and it still is to some degree.

Around 2006 and 2007, I worked really hard at starting all over. I’m a family man, and this is what I’m talking about the rest of my life, because it’s more important than anything else. And it’s worked.

Did you expect the material to connect in the way that it has?

No. My first tour (the Breuniversity Tour in 2008), I brought my father (85 at the time), and I filmed it (the footage inspired a well-received documentary, “More Than Me”). I also booked all universities. I was talking about taking care of my dad, being married, being a father; it was so out of their league. But my thought was, if the college kids accept this, then it will be 10 times easier with the people I really want to appeal to.

I remember being in Houston, and this kid came up to me. He goes, “I drove six hours hoping I’d get a chance to smoke something with the guy from ‘Half Baked.’ But after watching your set, I have to tell you: I was always afraid to be a father, and you make it sound like it’s the greatest thing in the world. You completely inspired me.”

I wish I knew that kid’s name. He doesn’t realize it, but that was a moment that gave me so much inspiration to keep going. That tour ended up giving me all the confidence in the world that I was on the right path. To be honest, it just felt better. I was connecting with people.

It must have felt especially good to know that you were connecting—and being true to yourself.

A frustrating part of the industry, as you’re coming up through the ranks, is when people ask, “What’s your voice?” I never understood that. What do you mean, “what’s my voice?” What’s wrong with just being funny?

But once I started that tour, I finally understood what it means. I found my voice. My voice was to talk about things that I’m passionate about—and that I know. It’s like being a baseball player. Now, I swing at fastballs only if they’re down and in. And I swing at changeups only if they’re outside. That’s it. And when I do swing, that ball is going into the upper deck.

For me, why swing at anything else? Don’t swing at politics. Don’t swing at drug stuff. I’m not good at it. … You’re trying to be something that they want you to be, rather than being yourself. I struggled with that between 1995 and 2006. Once you’re on TV, that’s all people know. And that’s who they want.

Now, people come to see me four, five, six times. I have this tremendous cult following, and I love that.

Of the personal episodes that you’ve shared with audiences—about your father, about the cancer that has affected your family—is there a topic that consistently resonates?

People love the stories about my daughters, but it’s anything relatable. This year, I’ve been talking about mortality—I’ve had a lot of it the past three or four years—and I do my best to make it extremely funny. But I find, sometimes, that it’s still very sensitive—for others.

You’ve said in several interviews that the Hollywood scene wasn’t for you. What didn’t sit well with you?

It’s soulless. It’s vanity. It’s everything that’s not real. When vanity and money become your god, that god will do anything to be No. 1. It will steal. It will demoralize you. It will break down your moral code. It will spit at your beliefs. It will laugh at you when you’re down.

I wish I could tell everyone going into that world, “Listen. You can go there, but keep in mind that it’s just a business. Make sure you keep your faith intact. And keep your family and close friends intact at all times; they’re the only ones who will be honest with you.”

Speaking of which, do you ever cross the line with your wife and children as far as what you share?

Oh, God, yes. I’ve had many phone calls. “Dad, did you say something about me and my boyfriend? That is not to be discussed.”

And I’ll say, “OK, well, then, the bank closes on your college fund.”