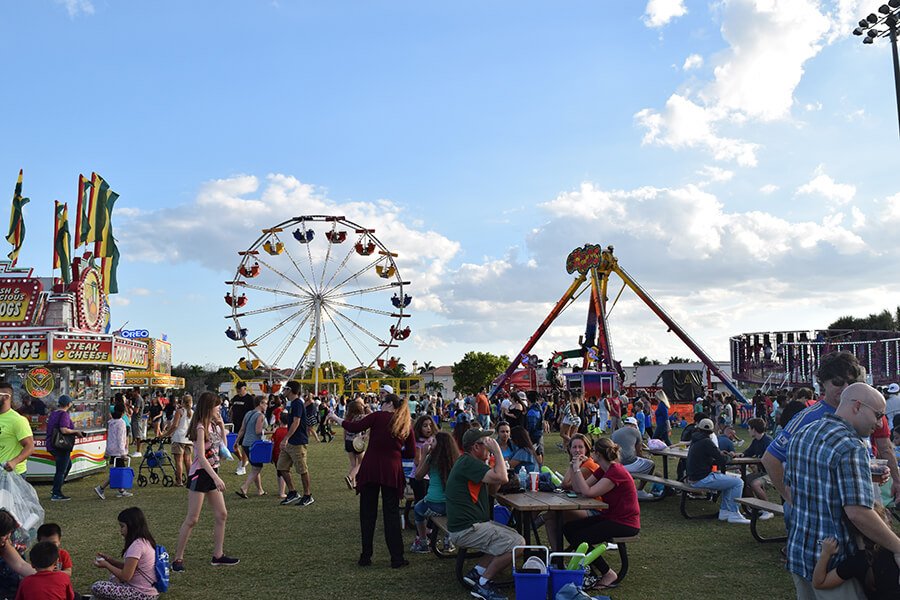 When Leo Moleiro became Coconut Creek’s special events planner in June 2016, he was confident about what his job would entail. But something kept coming up.

“When I first started working here, [everyone said], ‘Hey, you’d better get ready for the Butterfly Festival,’ ” Moleiro says. “I was like, ‘Well, it’s June. I’ve got eight months.’

“But they were so right. You really do need to get ready early.”

Moleiro quickly found that the Coconut Creek’s marquee event was not only the city’s biggest event of the year but also a team effort among city staff, a feat he calls “incredible.” Public Works makes sure electricity is available for the entertainment and that picnic tables are in the right place. The Community Relations Division takes care of promotion, including maintaining the website and printing banners. Police oversee traffic and parking, and the city manager’s office handles contracts.

“The biggest challenge is communication, but we do a fantastic job of being on top of that,” Moleiro says.

That synergy between the staff and departments is something that Toni Shreffler can relate to. She was the city’s special events coordinator and then special events planner from October 2005 until her 2016 retirement. During her tenure, the festival grew and became a catalyst for smaller events, such as the Home Grown Concert Series, among others. She credits the festival’s growth, success and smoothness to the staff’s teamwork.

While Shreffler led the organizing efforts, the festival evolved. Each year, staff members evaluated necessary improvements, asking residents for suggestions and implementing changes when they could. Shreffler also recruited local talent to perform, attracted major sponsors and also brought on a variety of tribute bands to headline the festivities, including groups performing the music of Bon Jovi, Billy Joel, Eagles, Abba and Journey, which was one of the most memorable, Shreffler recalls.

“Coconut Creek has a small-town feel and the people just love their community,” Shreffler says. “I think the city does an incredible job of servicing them and getting their opinions on things and doing what they can to make Coconut Creek a great place to live.”

For such a large event, it had humble beginnings. Wayne Tobey, director of the Parks and Recreation Department, remembers the festival began as a celebration of the opening of Sabal Pines Park in 2001. Staff members put together an event with bounce houses and games. In 2002, the park was set to be the site of the city’s 35th anniversary. The event was rained out, but the staff held to their conviction that Sabal Pines would host large-scale events as the city was growing.

“It wasn’t all just about anniversaries,” Tobey says. “[Major events] were something we wanted to take on. We wanted to make this an annual event for the community, so that’s how it was adopted.”

The event came back in 2003. Country singer Collin Raye performed, residents flew butterfly-shaped kites on the baseball fields, students displayed butterfly artwork, and local schools performed. The Butterfly Festival was born, coinciding with the city’s branding itself the Butterfly Capital of the World in 2002.

“[It’s about] pulling everyone together and showing our residents how beautiful our parks are and having them all come out and show that neighborly [feeling] toward each other,” Tobey says.

For his part, Moleiro is keeping up the quality that residents have come to expect from the festival, taking residents’ input into consideration for improvements. For example, a complaint about people cutting in line led to moving rides for younger children to the baseball field, which alleviated congestion and confusion. Moleiro also plans to incorporate more contemporary entertainment, such as the Justin Timberlake impersonator at last year’s festival, to grow with the city.

“There are younger families and people moving into the city, and we have to make sure that we’re ahead of the curve and giving them entertainment that they’re going to enjoy so they can stick around for a couple of years,” Moleiro says.

And while he’s looking forward to enjoying this year’s festival, Moleiro is also keeping residents foremost in his mind.

“The city does a good job of making everyone feel like one big family, and that’s something that we want to extend to the whole city,” Moleiro says. “It’s the city’s birthday party—that’s how I like to put it. You invite everybody in the city and, hopefully, everyone gets to blow the candles with the fireworks at the end.”

Butterfly Festival by the Numbers

A few behind-the-scenes facts from the organizers of the Butterfly Festival.

Moleiro estimates that about 5,000 people visit the festival with 1,000 people being in the field at any given moment.

There are 18 carnival rides and five different types of attractions.

High schoolers, police and fire youth organizations, nonprofit organizations and members of the local community emergency response team make up some of the 250 volunteers.

Each festival takes one year to plan. The staff meets the Monday after the Saturday festival to start planning the next year’s event.

The 30-minute firework show takes nine hours to set up.

What: The city’s 16th annual festival brings back favorite activities, including face painting, a vendor fair with local businesses, live music throughout the day, arts and crafts, food and refreshments for sale, a police dog demonstration and a fireworks show. Tusk, a Fleetwood Mac tribute band, will take the stage.