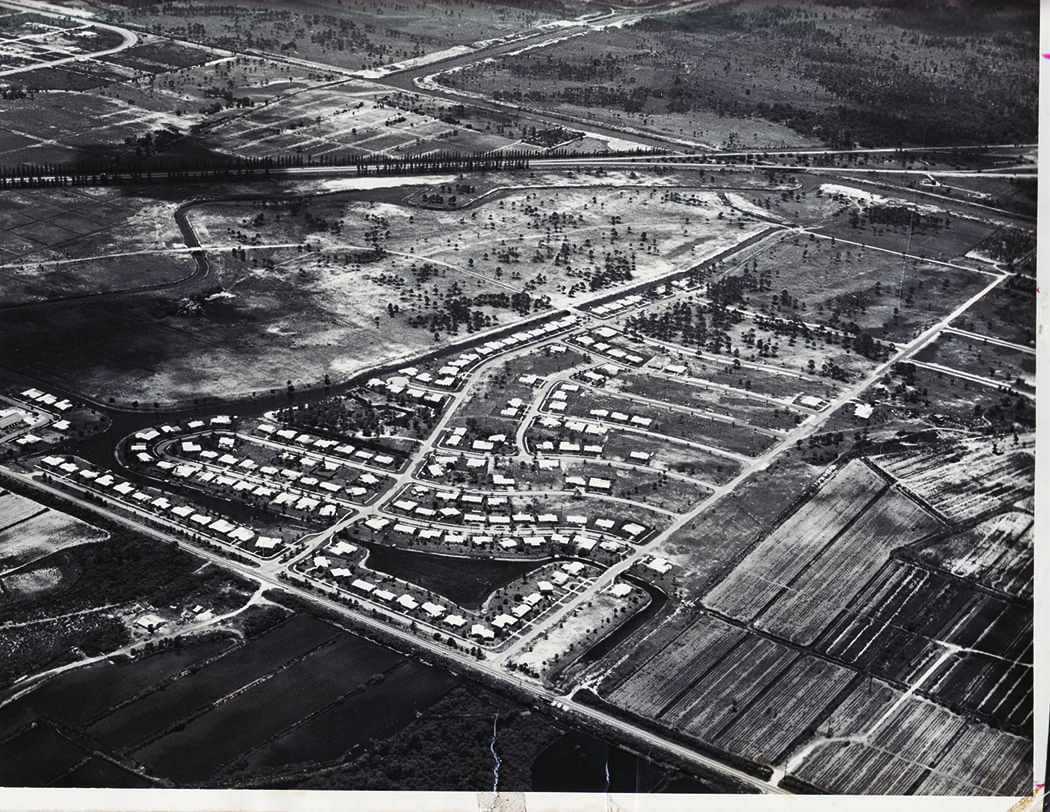 Back to the Beginning

The story of how Coconut Creek became a city

One of Coconut Creek’s most popular attractions, Tradewinds Park, draws visitors from all over Broward County. Parents take their children to ride model trains, teenagers go to play baseball and soccer, and tourists stroll through the gardens at Butterfly World, located within the park . But few people think of the 626-acre park as a slice of local history.

Joyce Vinkemulder knows this better than anyone. The family of her late husband, Neal, bought 40 acres of that land when they moved there from Michigan in 1948. Most of those acres eventually became Tradewinds Park because Joyce and Neal resisted selling to developers, to preserve the land’s beauty.

“It may not have been a financially smart thing to have done, but it’s what we wanted to do. … The grandkids come [to Tradewinds Park] and still feel the same way,” Joyce says. “They play on the same farm their granddad had years ago.”

Roughly 2.5 acres of Vinkemulder land remains as Wooden Shoe Gardens, a nursery Neal founded and that Joyce now runs with her son and grandson. It sits south of Wiles Road and east of Lyons Road on Vinkemulder Road, the family’s old farm road. Every day, she drives to the nursery from her home—another slice of history: South Creek, Coconut Creek’s first neighborhood.

The story of how this area became a city is one of several that Coconut Creek Lifestyle will offer throughout the year in a series of articles that explore the city’s past and present. With this first one, we look back at how it all began.

In 1956, Robert E. Bateman of Pompano Beach-based R.E. Bateman Realtors Company bought several hundred acres west of the Florida Turnpike and south of Atlantic Boulevard. The area was known as Edgefield, because it was on the edge of several farms. He renamed it Coconut Creek, borrowing from the Miami-Dade locations Coconut Grove and Indian Creek.

Vinkemulder, who moved to South Florida in November 1957, remembers what it looked like.

“On either side of the road, you’d see migrants picking or planting vegetables,” she says. “Between Coconut Creek Parkway and Sample Road, or even as far as Wiles Road, it was just farmland. There’s not much you can tell about it.”

With Jack Brown of Jack Brown Properties, Bateman built the first homes and started promoting the area south of what is now Coconut Creek Parkway, which is known as South Creek by today’s residents. Brown said this of the area in a promotional brochure:

“Coconut Creek is in the minds of many, the ideal Florida … A serene and verdant spot removed from the tumult of the tourist world, an oasis of peace and beauty in the heart of the Gold Coast. … In developing Coconut Creek, we have striven to preserve Mother Nature’s handiwork of wooded land and rambling waters, embellishing vast acres with coconut palms.”

Neal and Joyce married in 1959 and lived in a cottage on Atlantic Boulevard the first two years of their marriage. Though they wanted to build a house on their property near the nursery, they couldn’t get a loan because there was no hard-top road. That’s when they decided to buy a house in the burgeoning neighborhood.

“First, we went there, and there were houses for I think only $14,000,” Vinkemulder recalls. “When I came from Michigan, the houses were $6,000. So Neal said, ‘No, we’re not going to spend that kind of money for a house.’ So it was a couple years later when Jack Brown got ahold of Neal and he said, ‘You’d better get a house here because they’re going to go up eventually.” We finally said OK, so we paid $17,000 for our house.”

She recalls that Bateman was a “great” builder who handled resident issues and complaints calmly.

“He did a magnificent job of planning,” she says. “You could have rains for two days and you wouldn’t have any water in the streets. We never had any water anywhere in South Creek. He did a tremendous job of engineering.”

By 1965, the neighborhood had almost 200 homes and a homeowners association, which held neighborhood events and ensured streetlights and other improvements. The growth prompted both Margate and Pompano Beach to request the state Legislature that Coconut Creek become part of their cities. However, residents resisted new boundaries and asked the state Legislature to not be annexed.

While the petition worked, residents knew they would have to fight continuously to remain independent. The homeowners association president, John M. Reed, created a committee to decide Coconut Creek’s future. The committee favored becoming an independent city and began the process on Nov. 3, 1966, after asking for resident input.

The official vote came in Feb. 19, 1967. That day, 236 of the area’s 260 registered voters cast their ballots at Calvary Presbyterian Church and favored incorporation, 163-73. The result was taken to the state court and the Florida Legislature, which approved the request.

Gardner C. George became the first mayor, and, by March 1967, the city had officials and a seal. The first councilmen were James H. Bush, William H. Davis, Myrtle C. Reed, Harold G. Smith and Hollis W. Wacaster. The city clerk was Helen M. Donaldson and the marshal was Jack M. Cooper. The city charter was adopted in 1971, and public meetings were held at Calvary Presbyterian Church until a government center was built. Growth continued with the construction of a community center and the start of the police and fire departments.

With growth and northward annexation in the ’70s and ’80s, and commercial development in the ’90s, the city gave way to urban living.

With developments such as The Promenade at Coconut Creek, the city is becoming not only a desirable place to live but also a South Florida destination, with entertainment centers such as the Seminole Casino Coconut Creek, Butterfly World in Tradewinds Park and Fern Forest Nature Center. More is coming with the MainStreet downtown area—the plans for which were drawn in 2004. A mixed-use area built to environmentally friendly standards, MainStreet would be the country’s first contiguous certified green building project.

But whatever comes, there’s a part of the city that will remain as Joyce remembers it. About 1½ miles east of The Promenade is the land Vinkemulder has known for more than 50 years.

“When you get up there, then you realize you’re in a different part of town,” she says of the area. “It’s a whole different world once you go past the west side of Lyons Road. … People come here and say, ‘I never knew a place like this existed down here. It’s so different.’ … You still don’t hear any motorcycles down the street or people hollering. It’s just a quiet neighborhood.”

A look at what life was like when Coconut Creek was founded in 1967.

Cost of a gallon of gasoline: 33 cents

Academy Award winner for best picture: “A Man for All Seasons”

Several of Coconut Creek’s roads and parks are named for city pioneers. Here’s a few of the people behind the names.

Windmill Park—named for the windmill on the farm of Earl Johns, one of the area’s first residents

Rowe Community Center—named for Jack and Ethel Rowe, Coconut Creek pioneers; Ethel (pictured above) was the first recreation director and Jack was a mayor

1982: City receives its first Certificate of Achievement for Excellence in Financial Reporting by the Government Finance Officers Association, which serves the United States and Canada

2002: City declares itself “Butterfly Capital of the World”