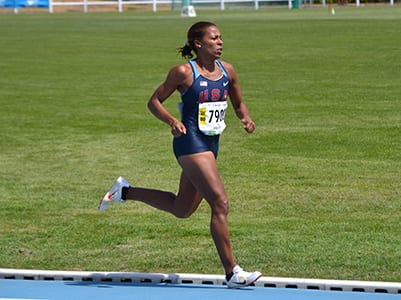 Tammy King-Foster’s Olympic dream will soon become a reality. It is a dream she’s had since the age of 14 when she was a student at Palmer Trinity School. The now 40-year-old, who is back at Palmer Trinity as the head of track and field, proves that dreams do not have a shelf life.

In 2004, King-Foster was at the top of her professional career. She ran the seventh-fastest time in the world in the 500-meter and was in the top 10 in the U.S. for the 800-meter. Sadly, an injury in late 2004 set back her dreams. “Even after taking off the appropriate amount of time for my foot to heal, I was still not ready to compete,” says King-Foster.

In 2005, King-Foster gave birth to her son Austin. Afterward, she slowly began to train again. In 2010, during a 5K road race, she stepped in what appeared to be an innocent-looking puddle that was actually a deep hole. She sustained severe injuries to her hip, back and glutes. The injury also drastically affected her hamstring and calf muscles. Doctors gave her the grave news that she would never run again – much less make the U.S. Olympic team.

However, the track and field veteran of 26 years, who also played soccer for 15 years, was not ready to throw in the towel. “I love to dream, I live to inspire,” King-Foster says. “I want others to look at me and say, ‘Because of you, I didn’t give up.’”

King-Foster immediately started what she calls a life-changing healing and rehab program centered on neurologically based, functional chiropractic care with Drs. Joe and Lisa Coffman at Vivify Chiropractic. With the Coffmans’ attention to her spine, hips and legs and additional support from acupuncture and nutritional supplements, she has done something no one thought was possible: make a full recovery. As a result, this past summer, King-Foster ran qualifying times in the 400- and 800-meter, and finished 27th in the World Masters Athletics Championship in Lyon, France.

This marked a new chapter in her life. King-Foster is now an official U.S. team member with an opportunity to race. “Most women my age cannot or do not run anymore, but I’m both thankful and grateful for the opportunity before me,” she says.

“Tammy is an inspiration and a role model for both our school and our community,” says Patrick Roberts, head of school for Palmer Trinity. “She has shown tenacity, fearlessness and perseverance in the face of extraordinary physical adversity, and she has risen above it all to reach her dream of being an Olympic athlete.”

King-Foster actively trains at and competes for Alpha Omega Elite Track Team & Fitness. She owns and operates the company, which was left to her by her late husband, Arthur L. Foster Sr.

“She is a passionate coach, one who really does bring out the best of her athletes while still encouraging and helping with emotional, academic and family well-being,” says Duncan Stoner, a sophomore at Palmer Trinity. “She is truly an inspiration, not only because of her passion for the sport of track and field, but because she is one of the most cordial, friendly and admirable people on campus,”

“My team has prepared me both physically and mentally to face the challenges of the Olympics next year,” King-Foster says. “Today, there is purpose with every step I take. I know there is an end to the means I’m working toward.”