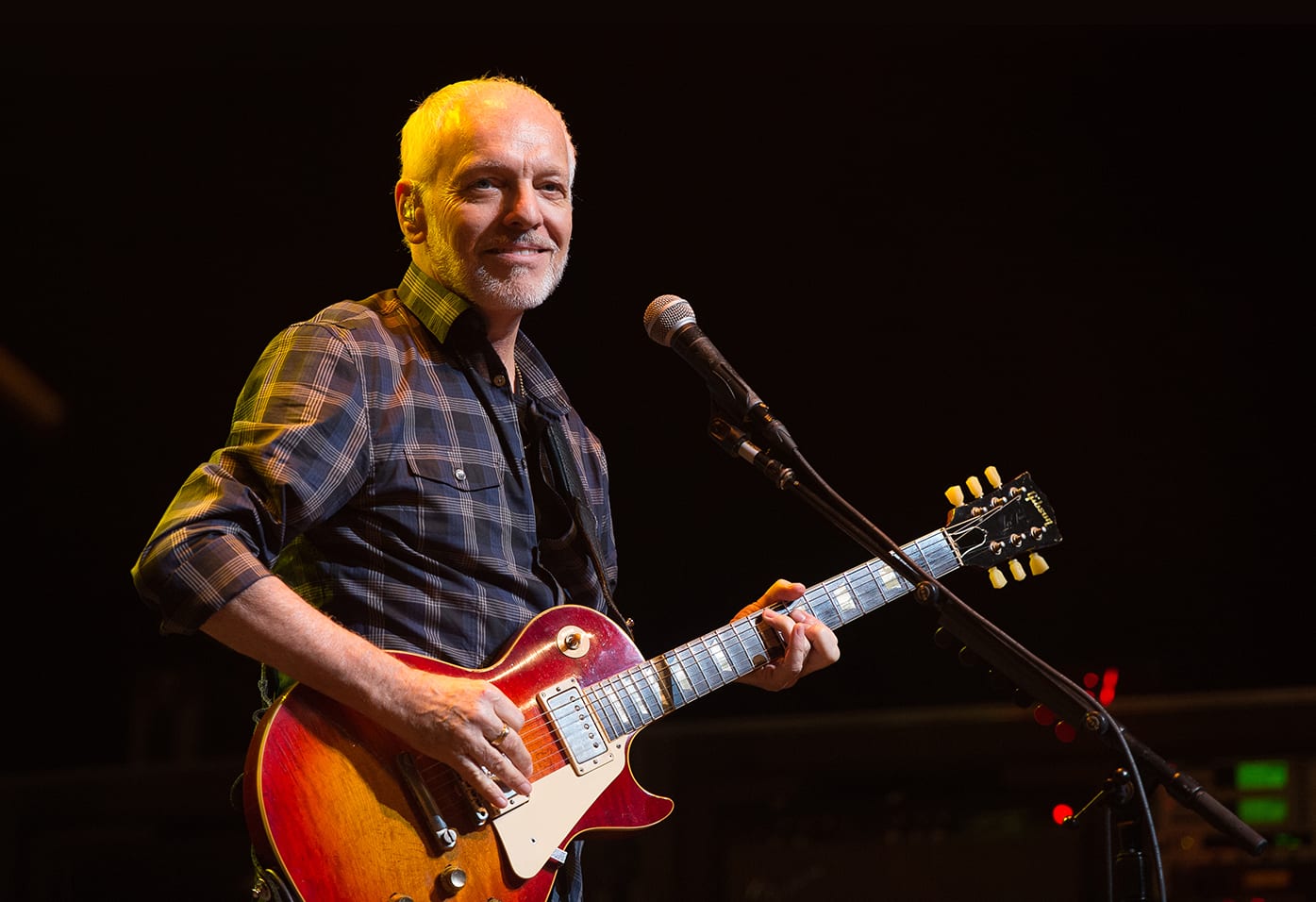 During his first-ever acoustic tour last year, legendary rocker Peter Frampton would turn to his writing partner, Gordon Kennedy, and quip, “So people pay so much a month to stream songs, and we get how much?”

To which Kennedy would reply, “Nothing.”

That exchange explains, in part, why Frampton joined other songwriters on Capitol Hill this spring in a lobbying effort aimed at updating an antiquated and overly regulated royalty system.

“Without the song, there is no record—and there is no streaming,” says the 67-year-old, who came to fame as a teenager in the late 1960s with British group The Herd, followed by a two-year stint with Humble Pie before he went solo. “The songwriter is the most important person in the scheme of things.”

When he’s not fighting the good fight, Frampton continues to do what he does best—perform live. The man who gave us “Frampton Comes Alive,” the double album that spent 10 weeks atop the Billboard charts in 1976, is on tour this summer with his old friend, Steve Miller, including a show at Hard Rock Live on July 14.

Frampton spoke to Lifestyle about his career—and about his trip to D.C.

Your career first took off during perhaps the greatest era in rock history. Why did England, especially, produce so many iconic bands and performers in the 1960s?

I was born five years after the end of World War II. I think that my parents, and other baby boomer parents, felt that they had part of their lives taken away from them. Especially those in Europe. They never wanted their children to have that lack of freedom. That’s my theory on why so many, mainly English, children furthered their artistic dalliances, which turned into careers. We were free—and the kids are all right, as Pete Townshend said.

You and David Bowie went to Bromley Technical School as teens—is it true that you played guitars together at lunch?

Yes, we did. My father was the head of the art department, which was huge at this technical high school. I’d seen David play in a band before attending the school, so I knew who he was. We would bring our guitars to school and jam on the art block stairs. I don’t think it was very good. We were probably learning Eddie Cochran songs at the time. But it was such fun.

You’ve credited Bowie for reviving your career in 1987 by bringing you out on his “Glass Spider” tour. What did you discover about yourself that had been missing since that crazy period after “Frampton Comes Alive”?

I think it was a wonderful gift that David gave me. He knew me as the guitar player. And as the musician. He could see what went on in the pinup days of post-“Comes Alive.” Giving me that opportunity helped me to realize that, first and foremost, I’m the guitar player. Singer? Songwriter? Yes. But if I could only do one of them, I’m essentially a guitar player.

He took me around the world and reintroduced me as that. Which was phenomenal. I would never again go against my gut instinct. This is what I’m supposed to be on stage. I could never thank David enough for that.

Last year was the 40th anniversary of “Frampton Comes Alive.” What do you think the live versions of those songs tapped into that your solo studio albums didn’t?

I don’t know why it became so successful. The only thing I can say is that, when I play live, there’s something extra that I bring to the stage—something that’s not in the studio. I think it’s the fact that I enjoy what I’m doing so much. There’s nothing like being uninhibited on stage. There’s only one take. In the studio, you can pour your heart out on a vocal or guitar solo, and then look up at the end and [the engineer goes], “OK, let’s try another one.” And you’re like, “Wait a second! I thought that was really good.”

With live, that’s it. All the mistakes are included. It’s that living-on-the-edge thing that I most enjoy. Wherever you put the needle down on “Comes Alive,” it makes you want to smile. You can feel the “something extra.”

Are you playing the guitar as well as ever?

After a year of touring, maybe you don’t want to see the guitar for a couple of days. But the passion I have for playing the guitar reignites every time I look at the damn thing. I still study by listening to any player I can—but, mainly, I steal from the greats. Django Reinhardt is one. The first time my dad put on jazz music by Hot Club de France [featuring Reinhart and violinist Stéphane Grappelli], I couldn’t get out of that room fast enough. Where was the electric guitar? But as the months passed, I stayed longer when my father put on Django. And then I never left.

I’ll never have his full dexterity—even though I have more fingers than he did. [Editor’s note: Two of the jazz guitarist’s fingers on his left hand were paralyzed after being severely burned in a fire.] He was so good and so melodic in his choice of notes. I figure if you choose someone who’s just out of reach, then at least you’ll get something from it.

Regarding the royalty system and your trip to d.c.: What should people know about why current regulations are antiquated?

If I give you one piece of information, it will let you know why we had so many congressmen with their jaws dropping. I had 56 million streams on Pandora for “Baby, I Love Your Way”—and what I received as the songwriter was $3,000.

In the days of albums, cassettes, CDs—all these hardware forms of listening that you had to buy—the performing artist and writer got more of their due. But it’s changed so drastically. Everything is going the streaming way. If this continues, and we don’t get what we’re supposed to get, then why would anyone want to choose songwriting for a career?

How do you reconcile the financial part with the fact that streaming is how people access new music—and classic songs?

I don’t mind them accessing music that way—as long as these wonderful congressmen we went to see help to make things more even and increase the rate. Songwriting is the only small business that’s 70 percent controlled by the government. We would like that changed. We want it out of the courts and into an arbitrary situation where the songwriters are paid fair market price. That’s the big fight.

You were 16 when you joined The Herd. What kind of advice would you give to today’s pop stars who find success at a young age?

Make sure you have a good business manager—and a great lawyer.

Tickets: Starting at $55 (not including service fees)