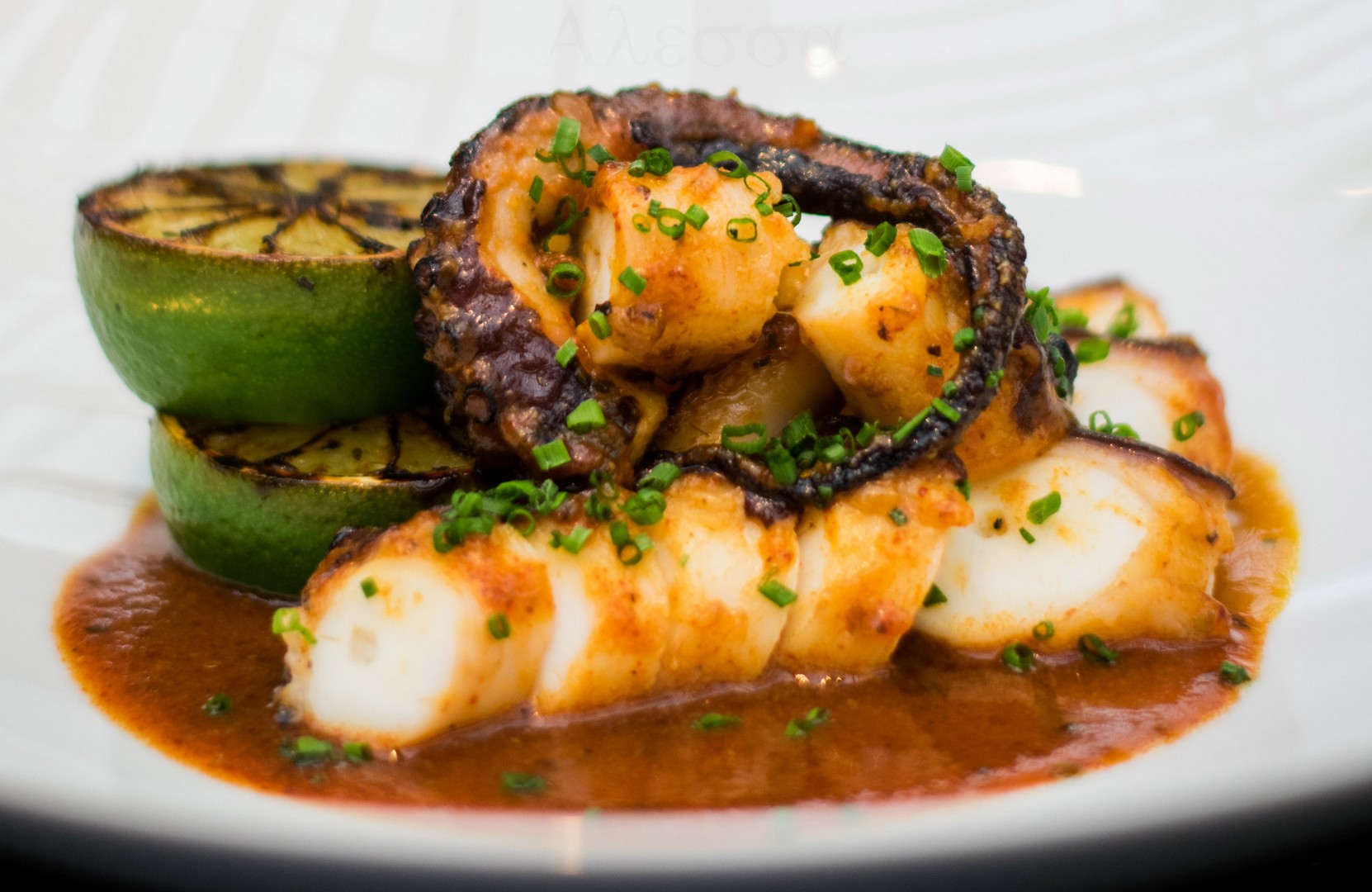 Where: Nobu Miami
Taste the difference: High in protein, Nobu’s octopus is cleaned and lightly salted before it is slowly braised in a court bouillon, which is a flavored liquid commonly used to poach seafood. Executive chef Thomas Buckley then adds a pinch of green tea containing tannin, a natural meat tenderizer. After about four hours, the octopus is placed in olive oil and lemon juice, keeping its tender texture. Before it’s served, it’s roasted and dipped in red anticucho, and then roasted once more until a crisp outer crust forms.
While you’re there: Many of Nobu’s offerings are carb-free and high in protein, including the tiradito (thinly sliced fish flavored with a zesty juice), as well as the lobster salad and cauliflower cooked in the restaurant’s wood oven.
Contact: Nobu Hotel, 4525 Collins Ave., Miami Beach; 305.695.3232, noburestaurants.com/miami

Where: Café Maxx
Taste the difference: Good luck finding two sources that agree on the origin of the lettuce wrap, the popular Asian dish that, depending upon whom you believe, has ties to the fourth Earl of Sandwich or former baseball manager Bobby Valentine. While chef Oliver Saucy didn’t invent the lettuce wrap, he’s doing plenty to perfect it at Café Maxx, where various incarnations often appear on his ever-changing menu. His seared wahoo wrap (other versions feature chicken breast, tuna or small shrimp as the protein) includes hydroponic Bibb lettuce on the outside, inner leaves from a Napa cabbage and purple radicchio leaves for color. He ramps up the flavor with assorted sauces (white soy ponzu, peanut, sweet chili Vietnamese), pickled cucumber and mixed vegetable slaws.
While you’re there: A recent spring menu illustrates the thought that goes into Saucy’s lighter fare—with entrées like the molten brie petite filet mignon with wild mushroom farro and grilled vegetables.
Contact: 2601 E. Atlantic Blvd., Pompano Beach; 954.782.0606; cafemaxx.com

Where: Market 17
Taste the difference: Don’t let the butter throw you off. It’s what’s underneath the lobster that also counts in this delicious dish from Market 17 chef Lauren DeShields, one that marries two loves—her own passion for Mediterranean fare and Fort Lauderdale’s insatiable hunger for seafood. The lobster is served atop a light zucchini salad with pickled carrots and charred eggplant pudding. The plate also features almond and herb falafel, which are made by soaking a batch of chickpeas and melding them with spices such as cumin and coriander.
While you’re there: Try the Florida yellowfin tuna, seared rare, served with cauliflower couscous—or the grilled antelope loin, which is lower in cholesterol than chicken and has fewer calories than beef.
Contact: 1850 SE 17th St., Fort Lauderdale; 954.835.5507; market17.net

Where: Oceans 234
Taste the difference: As owner Danielle Rosse notes, dining at Oceans 234 is about more than just delicious fare. “We also take our customers’ wellness into consideration,” she says. To that end, look no further than the restaurant’s menu of gluten-free alternatives—including an 8-ounce center-cut filet mignon served with crisp haricots verts. The tender cut is pan-seared to seal in its juices then cooked to temperature. Oceans 234 tops the dish with ragout made from cremini, oyster and shiitake mushrooms, followed by a crown of rosemary demi-glace.
While you’re there: The gluten-free menu also includes salad (kale Caesar, greens and poached pear), brunch (sweet potato hash, sundried tomato frittata) and entrée options (seared scallops, grilled branzino, snapper Veracruz and Scottish salmon).
Contact: 234 N. Ocean Drive, Deerfield Beach; 954.428.2539; oceans234.com

Where: Juvia
Taste the difference: When executive chef Laurent Cantineaux sampled the sea bass from a supplier in Saint Barthélemy, she knew she had to create a dish with it. Pan-searing the fish, which creates a golden outer crust, enhances the flavor. She pairs the sea bass with maple-glazed eggplant, which Cantineaux based on the ancient recipes from Rome and Morocco that call for eggplants to be cooked with honey. The plate is topped off with a pungent caramelized soy sauce and crunchy cucumber.
While you’re there: Try the broiled branzino, a Euro sea bass, served with watercress, tomato and avocado—or the ceviche mix with octopus and sweet potato.
Contact: 1111 Lincoln Road, Miami Beach; 305.763.8272; juviamiami.com

Where: Farmer’s Table
Taste the difference: The commitment of co-owners Mitchell Robbins and Joey Giannuzzi to serve fresh food sourced “cleanly and responsibly” has made this eco-sensitive restaurant a favorite in south Palm Beach County. It also helps that the kitchen brings out the best, flavor-wise, in healthy dishes like the gluten-free spasta and meatballs, which is made with spaghetti squash—a low-fat, low-cal substitute for traditional carb-heavy pasta. Diners have a choice of chicken or vegan meatballs; the dish is topped with San Marzano tomato sauce and, for $2 extra, house-made mozzarella.
While you’re there: Flatbreads made with whole wheat lavash are all the rage at Farmer’s Table; offerings include cauliflower and brie, roasted mushroom and goat cheese, barbecue Florida shrimp, and steak and gorgonzola.
Contact: 1901 N. Military Trail, Boca Raton; 561.417.5836; farmerstableboca.com

Where: Sublime Restaurant & Bar
Taste the difference: If limiting meat or dairy is your plan for a healthier dining experience, Sublime’s vegan, cholesterol-free menu does the work for you. The mushroom ravioli even substitutes the carb-loaded pasta; the homemade dough in this case is made with silken tofu. The mushroom-cashew cream filling, meanwhile, is created with shiitake, portobello and white-cap mushrooms and slowly cooked with caramelized shallots, garlic and white wine. Instead of dairy cream, the mix is blended with cashew cream. Nutritional yeast adds a nutty, almost cheesy flavor—plus plenty of protein.
While you’re there: Owner Nanci Alexander also suggests the Raw Mein entrée, which makes a convincing argument for subbing zucchini noodles for pasta. It’s mixed with napa cabbage, carrots and bok choy—nutrient-dense greens—and topped with diced red peppers and miso ginger dressing.
Contact: 1431 N. Federal Highway, Fort Lauderdale; 954.615.1431; sublimerestaurant.com

Where: La Mar by Gaston Acurio
Taste the difference: A balance between hearty and light, this gluten-free Peruvian dish is crafted using lime juice, red onions, salt, ají (a spicy sauce made with aji limo pepper, cilantro, tomato and onion) and a choice of fish. The day’s freshest catch—executive chef Diego Oka prefers fluke, a white and mild-tasting fish, for his ceviche iteration—soaks in a citrus-based leche de tigre marinade, made of lime and ají peppers. For added crunch, choclo (large kernel Peruvian corn) is sprinkled on top.
While you’re there: Try the quinoa Caprese salad drizzled in ají amarillo sauce, or the vegetarian quinoa burger made with squash, carrots and beets with a pinch of chimichurri.
Contact: Mandarin Oriental, 500 Brickell Key Drive, Miami; 305.913.8358; mandarinoriental.com

Where: Wild Sea Oyster Bar & Grille
Taste the difference: The dish was inspired by the warm flavors of fall and winter, says executive chef Toby Joseph, and by incorporating superfoods—kale, quinoa and pomegranate—it’s hearty, yet healthy. It’s also simply prepared: He begins by coating an 8-ounce piece of grouper in crushed pumpkin seeds before lightly sautéing it. The pomegranate is reduced and thickened with cornstarch to create the sauce. Then the attention falls to the acorn squash, which is roasted whole in the oven. Afterward, it’s peeled, cut and added to a sauté pan with garlic, olive oil, lemon juice, kale and steamed quinoa.
While you’re there: “For healthier eating, I’d recommend the lobster pho; this dish is extremely ‘clean,’ with no oils or butters,” Joseph says. The steak tartare—if you omit the garlic aioli—is another well-balanced dish of protein, fat and carbohydrates. The same goes for the salmon (just withhold the nut butter if you’re counting calories).
Contact: 620 E. Las Olas Blvd., Fort Lauderdale; 954.467.2555; wildsealasolas.com

Where: Boatyard
Taste the difference: Take a walk on the Mediterranean side, where the cuisine is touted for being rich in healthy fats and grains, and oily fish such as salmon—high in omega-3 fatty acids—are commonly on the menu. In this dish, the fillet is lightly toasted with ground coriander, cumin, fennel and mustard seeds. Executive chef Doug Riess adds fiber with couscous, which is dressed with a lighter take on tikka masala sauce. Instead of cream, this bold sauce is flavored with ginger and cilantro and uses Greek yogurt as a base. It’s garnished with pistachios, golden raisins and antioxidant-rich pomegranate seeds.
While you’re there: The Tuscan kale salad keeps a meal light and simple. It has quinoa, red grapes, spiced pecans, Asiago cheese and lemon vinaigrette.
Contact: 1555 SE 17th St., Fort Lauderdale; 954.525.7400; boatyard.restaurant

Salads are a healthy staple on most menus, but these five Broward and Miami-Dade restaurants bring more to the table than just leafy greens.

Mushroom Katsuo
It’s not easy to skip the exquisite entrées offered at Kuro, the upscale Japanese restaurant inside Seminole Hard Rock Hotel & Casino, but if you must go light, try this fusion of sautéed mushrooms and arugula with a light tosazu dressing. (1 Seminole Way, Fort Lauderdale; 954.327.7625; seminolehardrockhollywood.com)

Put away the calorie counter and savor these sweet endings.

Mango Custard
The tangy custard at Hakkasan, a delight in and of itself, is served with grapefruit pieces, calamansi lemon and coconut sorbet. (Fontainebleau Miami Beach, 4441 Collins Ave., 786.276.1388, hakkasan.com)

Sorbet and Fruit
It sounds simple, but Meat Market goes the extra mile with a selection of fresh-made sorbets on a bed of mixed berries. (915 Lincoln Road, Miami Beach; 305.532.0088; meatmarket.net)