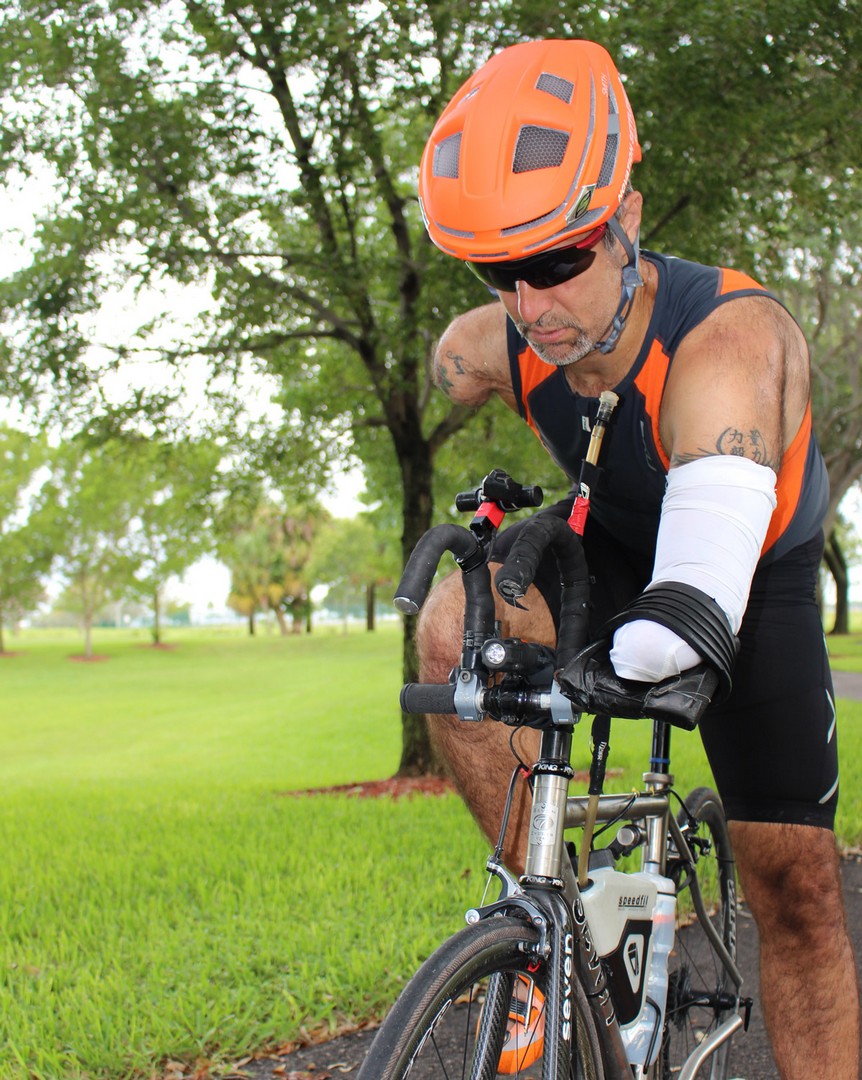 • After finishing the Boston Marathon in April—with a strained Achilles tendon, no less—Hector Picard wasn’t about to rest on his ever-growing laurels. His next adventure two weeks later wasn’t a race, but it would be just as taxing and, he hoped, just as rewarding. On May 1, he hopped on his bicycle in Texas and kicked off a 31-day, six-state tour for National Bike Month. Along the way, he presented medals that he and fellow athletes have won over the years to physically disabled children at hospitals and rehabilitation facilities. The venture, Tour to Inspire, took Picard out of his home state of Florida and to new parts of the country, where he hadn’t yet shared his own story of perseverance as a double-arm amputee.

• Twenty-five years ago, Picard was a young father working as an electrician when he came into contact with an active transformer, sending more than 13,000 volts of electricity through his body—twice. He lost both arms in the aftermath.

• Determined to return to the active lifestyle he enjoyed before the accident, the Fort Lauderdale resident, now 51, found a way to cycle—leaning forward on his bike, Picard rests his torso on a chest pad and slides his longer arm (skipping his plastic prosthetic) into a loop of fabric. He shifts with his chin, breaks with his right knee and sips water through a straw. He learned how to change a flat tire with his feet, and, in 2013, he took to YouTube to demonstrate. Triathlons came next—and now he’s completed more than 140.

• Next came motivational speaking. “I tell people that I’m always excited about the challenges that this disability brings because each day is exciting when you conquer your obstacles,” he says. “It can be so simple, but it’s a positive when you’re done.”

• For years, Picard, a father of four and grandfather of three, was racing for himself. He was proud of his medals—they were a testament that he could accomplish anything. He switched gears again in 2013, when he set up a fundraiser to help a family in Spokane, Washington, pay for prosthetics for their baby boy, who was born without arms. Over 36 days, Picard rode his bike more than 3,000 miles from Miami to Spokane. He came up with money for the copayment, and the child became the youngest person with myoelectric arms. “That’s when I said, ‘This is why I’m alive. This is what I’m here to do,’ ” he says.

• Picard founded dontstopliving.org and started a conversation online with the hashtag #SecondChance. Missing the funds to make a bigger difference, he turned to Novation Settlement Solutions, a West Palm Beach-based financial company that helped him obtain his settlement payments from the accident. After inspiring the company’s leaders, he became its spokesman. With Novation sponsoring his racing and charitable efforts, Picard has become a full-time triathlete.

• He started racing for the Broward Children’s Center, a facility in Pompano Beach that provides medical, educational and daily living services to infants, children and young adults with special needs. Last year, he donated 25 medals to kids needing a dose of his positivity. One of those medals, which sits at BCC, is from the Ironman World Championship in Kona, Hawaii—last year, he became the first double-arm amputee to complete it. He wore a sleeve with the names of all the children he had raced for. “I had failed at this race the year before,” Picard says. “There were moments I was feeling down, and I would look at the sleeve. They inspired me to keep going. They never have a choice to quit.”

• For the past month, Picard was on a mission to inspire a new crop of people to live their best lives. He rode with local cyclists and spoke to groups in Texas, Louisiana, Mississippi, Alabama, Georgia and Florida. “The idea is to reach out to different people and get their reaction as I ride with them,” he says. “Every time I ride with a group, everybody’s looking at me like, ‘What’s this guy all about? Is this guy going to be able to keep up with us or hold us back?’ By the time we’re done, they’re like, ‘Oh, my God.’ That’s what I’m looking for.”

• On June 24, he has plans to swim 12.5 miles around Key West. “I just love this stuff,” says Picard, who remarried several years ago after what he describes as a difficult divorce. “Going out there and pushing my body.” Sitting still is perhaps the only thing not on his agenda. “I had my second chance at life 25 years ago. What am I going to do with it? I’m just going to go all out.”