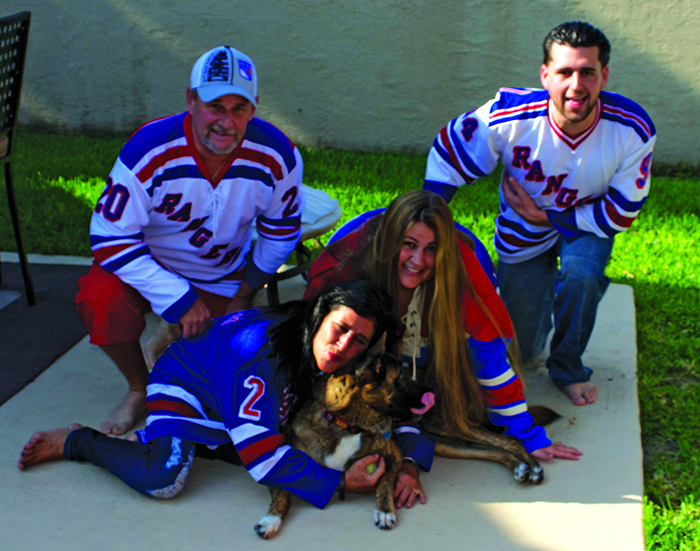 Jill Naidus: Live to Give

From her breast cancer awareness license plate to her collection of over 30 race medals and plaques, it’s safe to say that Jill Naidus is a philanthropic Parkland “it” mom.

“My name is Charity. I do charity work,” says Jill Naidus, without hesitation, as we sit around her kitchen table.

Known as the “neighborhood mom,” the 54-year-old has a fan club made up of kids and parents alike. From Gatorade-filled cooler schleps to Terramar Park to being heavily involved with the Anthony Rizzo Family Foundation and In Jacob’s Shoes charities, Naidus says that she loves giving back because she’s so grateful for all that she has, especially her family.

“We do everything as a family. We’re always together,” she says proudly.

Naidus graciously takes care of her aging parents, and her kids easily recognize that their mom is the backbone of their family.

“You were pretty involved with us when we played sports,” her 25-year-old son Brandon says, looking toward his mom. “She’s always doing stuff like that. She was the one there with the cupcakes for the kids.”

Both Brandon and his 22-year-old sister, Alexa, reminisce about how active their mom would be on the sidelines. “Alexa would hide!” Naidus admits.

In the rare event that she’s not surrounded by the loving Naidus clan and their German shepherd, Chief, Naidus can be found training for the New York City Marathon, which takes place on Nov. 1, to spread awareness and raise money to help fight leukemia and lymphoma.

This will be Naidus’ third time competing in a 26.2-mile race. With such ambition, it’s hard to believe that she didn’t start out as a runner. The former swimmer began her course on foot as a member of a Boca Raton walking club dubbed Team Amazing Moms (equating to her reputation, of course). She decided to speed things up a bit in the early 2000s when the idea of running for a cause finally dawned on her. She started training in 2004 and competed in the Disney Marathon in 2005 to honor a young boy with leukemia.

In 2011, she ran for her neighbor, Anthony Rizzo, in the Goofy Challenge, which consisted of a half marathon on Saturday and a full marathon on Sunday. “You have to be goofy to do it!” Naidus jokes.

Now, Naidus is looking forward to participating in a marathon to once again honor Rizzo as well as good friend, Fernanda, who is also battling leukemia.

“Fernanda has blond hair, but she’s losing it now that she’s going through chemo. So, I’m running with blond pigtails and a leukemia shirt,” Naidus says.

The supermom admits that she is still in disbelief that she’s running the New York City Marathon this year. When people ask her what time she thinks she’ll complete the race, she says: “I’m a Jewish girl from Parkland. I’m not beating that girl from Kenya. I just want to finish; I want to enjoy and I want to raise money.”

After receiving a $100 donation the morning of our interview, Naidus is more than confident that she’ll reach her $3,500 goal to compete.

In between training sessions, Naidus has become a master of weaving in additional charitable efforts. Naidus and the Anthony Rizzo Family Foundation recently raised $28,000 out of a collective $860,000. Many also see her picking up baskets filled with sneakers for In Jacob’s Shoes and handing out community service hours for students that help with the charity.

“She honestly has a heart of gold,” Brandon says. “You’re not going to find someone that puts people ahead of them more than she does. She’s probably the most selfless parent you could ever think to have.”

To support Jill Naidus and donate to find a cure for leukemia and lymphoma, visit her New York City Marathon fundraising page at pages.teamintraining.org/nyc/nyc15/jnaidus#home