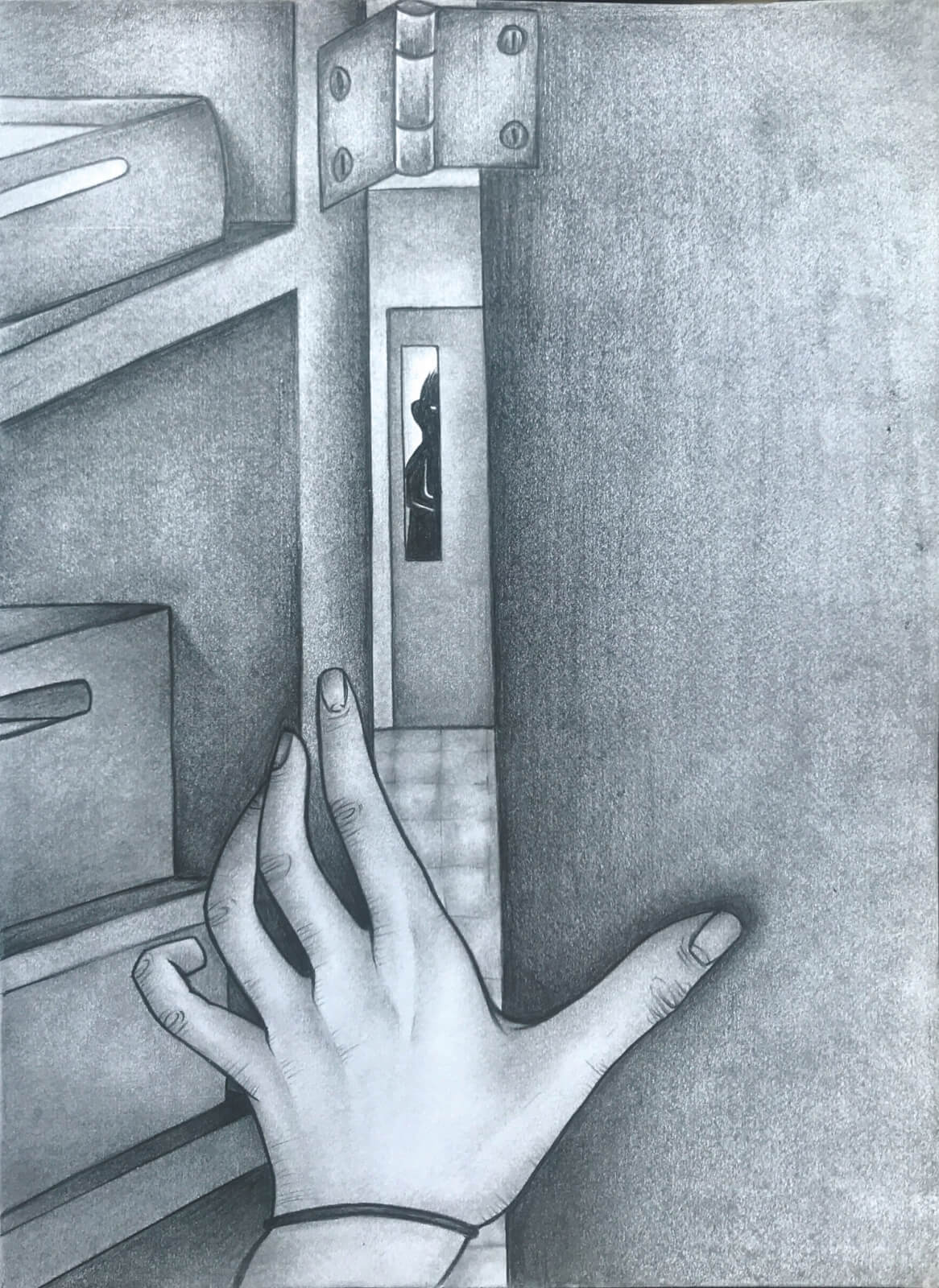 It was almost the end of our school day. We were getting ready to go home, and I was excited to go see my boyfriend, Robert. I got him a little stuffed bear with a jock jacket for Valentine’s, because he used to be a football player. And I got him little chocolates. I didn’t have them on me, so I was going to drive home first and then go see him.

Our assignment that day in creative writing was to write little love letters. We didn’t have to turn them in; we were supposed to give them to our love. I did mine on Robert, and I was talking about how much I cared about him.

My friend, Guac [Joaquin Oliver’s nickname], was sitting next to me to my right. He was wearing black pants and a nice peachy-pink shirt. He had just gotten a haircut. He was making this little heart cutout for his girlfriend. And I was like, “That’s really cute. I want to do that.” So, I stole his heart and traced it, and cut my own out. Just as I was finishing it, he taped the heart to his shirt and I stapled mine.

After I finished stapling it, we heard a “pop, pop, pop” sound. What the hell was that? Everyone kept talking, saying it was a prank. And then the popping sounds happened again. The fire alarm went on.
I was thinking that was too much of a coincidence. The sound was so rapid. I was looking at my teacher like, OMG. Joaquin was joking around, and he jumped into the closet by the door. He was pretending to hide, and when the fire alarm came on, he immediately jumped out and ran into the hall.
Because of that noise beforehand, we were confused. I’ve never heard what a gun sounds like. It was so far away, at first. It was too faint. I figured if it were a gun it would be louder. My heart just sank. What was that? And then the fire alarm went off. And my heart sank again.

I got up. I watched everyone walk out, and I was looking at my teacher, Miss [Stacey] Lippel, who was standing by the door and getting the fire alarm paper out of the file [drawer]. I waited for her to leave the classroom. Everyone had left the class. She was locking the doorknob from the outside, but the door wasn’t yet closed.

I turned around and I heard screaming; our classroom was the closest to the stairway, two doors down. The shooter had come around the corner. He was nearly 6 feet away from us. I was in shock, just standing there. I was frozen with fear.

I heard someone scream, “Code red! Get back into a classroom!” Then I heard multiple gunshots that made my ears ring. I couldn’t hear anything except the ringing.

Miss Lippel pulled me out of the way, and a bullet went right past me. I felt it swoosh by, and I saw a white flash. When it hit the wall, the drywall exploded; dust was coming off the walls. This can’t be real. There was drywall all over my clothes. I didn’t even know that Miss Lippel was shot until the next day.

When she grabbed me, I bolted back into the classroom and jumped into a closet. That was my instinct. The closet was filled with shelves, and I couldn’t fit inside, so I had to hang onto them. There was a little ledge underneath the shelves, so I was able to hold on easier.

It was about 40 to 45 minutes until the police got us out of there. My arms were so tired, and I kept slipping. Every time my feet would come down to the ground, I heard people telling me to put my feet back up because I was right across from the window, where he could see.

When I looked through the crack of the closet door, I saw the shooter standing outside our classroom door. I could see him trying to open it, but it was locked. He could have shot at the cabinet and killed me. But he gave up.

I was shaking and breathing hard, but I still thought it was a drill. [In my mind,] this was fake, and they had some kid, firing blank shots.

He walked away and shot more people in the hallway. I heard at least three or four more rounds of rapid fire. And then it got quiet. You could hear people screaming and moaning, “I’m shot.” I heard painful gasping, short and forced breaths.

Maddy [King] later told me that she believed that the shooter was the one making those cries for help to lure us out of the classroom. But when I was in the closet and I heard it, I could clearly tell that was Guac.

The police finally came and evacuated us. I still didn’t think it was real. Then I saw Mr. [Scott] Beigel’s body on the ground. He was the teacher next door.

I saw Guac by the bathroom on the ground; his arm was over his mouth, and there were shots on his rib side. The heart that he had taped to his shirt had fallen off and was next to him. It was no longer pink; it was red.

There were two girls on the other side of the girls’ bathroom, holding each other with their faces down; they were also deceased. Farther down the hall by the staircase was another body. His struck me the most because his face was leaning against the wall with his body on the ground. There was blood all over the wall. And his elbow had bone exposed; I could literally see right through his arm and his neck. I couldn’t see his face. The way he was positioned, it looked like he was trying to get down the staircase before being shot. At that point, I started to freak out more. I was already crying, but I was in denial until I saw that body.

Inside the hallway, it looked like a smoke bomb had gone off—from the police, I think. It was foggy. There was dust, debris, books, papers, bodies, school bags and cracked phones all over the floor. Blood had splattered everywhere. There was blood on the ceiling, blood on the walls, on the floor, and on the broken glass. And the smell. It wasn’t a smoke smell. It was a burning flesh smell.

When I came down the stairs to the first floor, I saw ear buds on the staircase. Those are used to quiet noise. I figured they belonged to the shooter. I was disgusted.

One of the text messages my dad sent me during the ordeal was, please keep your head down. I couldn’t respond right away. He thought I was murdered. My sister, Caitlyn, goes to the high school, too, but she was in a different building. She was evacuated about 20 minutes before me. She thought I was dead. When I finally found her, we both went home.

Even though I wouldn’t have to go back to the freshman building, being that close to it is unsettling. I’m not going back to Stoneman Douglas. I’m transferring to another school. The way that I’m coping is through writing and drawing.

I think I’ll grow from this experience. I’ll be more cautious when I go into a room. I’ll walk into a room and find the exits first. I’ll be less careless.

But right now, I’m scared to sleep. It’s not because I’m not tired. It’s because I’m scared to fall asleep and be in a dark room alone. I have nightmares where I’m running in the freshman building and every corner I turn, he’s there trying to shoot me. At the end of the dream, he catches me in the closet, and he murders me.