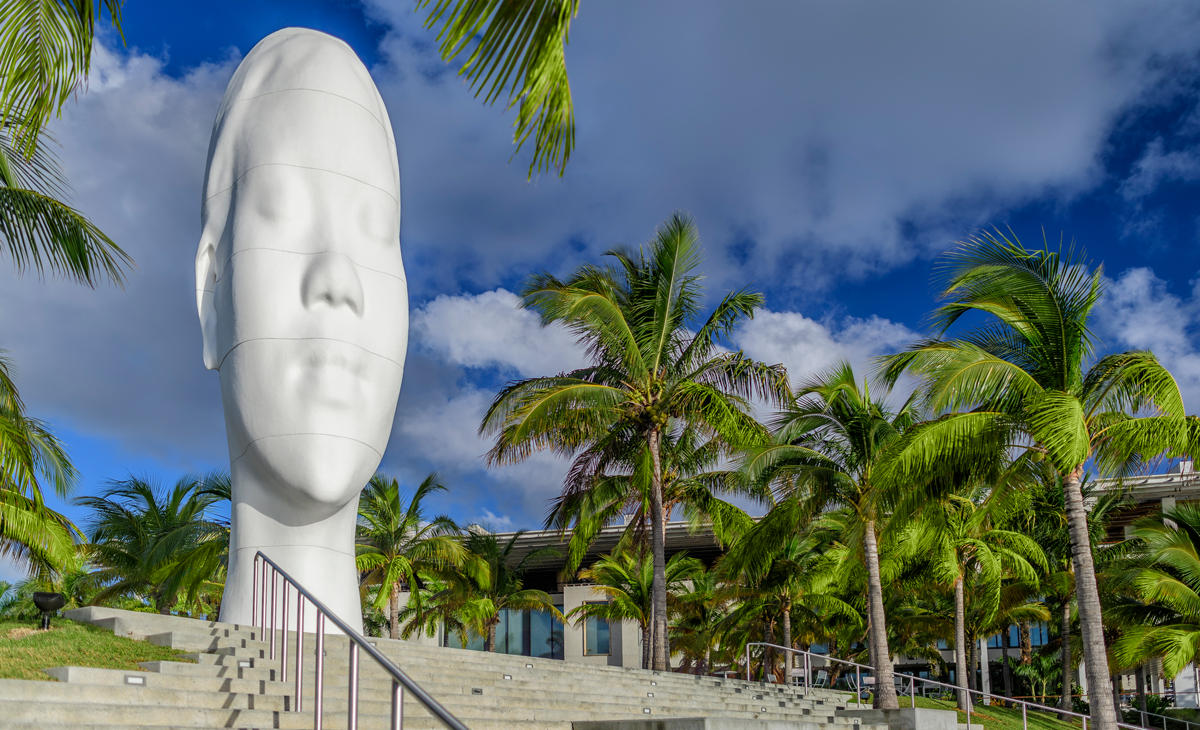 South Florida’s public art is just as colorful and creative as its millions of residents.

Craig Robins, an art collector and developer of Miami’s Design District, says public art “gives people a sense of place.” Developer Jorge M. Perez, who is responsible for Miami becoming the permanent home to “Awilda,” a 39-foot sculpture of a Dominican girl’s face, believes works like it establish a city’s “unique” identity.

For any public art to come to life, it needs to be “involved in human interaction,” says Bonnie Clearwater, director and chief curator of Fort Lauderdale’s NSU Art Museum. Then, there’s give back: what the art returns to its viewer. “Successful public art offers respite from the structured urban environment and moments of contemplation for visitors in parks and plazas,” she says.

Take our tour of four of the most interesting public art “people” in Miami-Dade. You can easily see all four works in under an hour. But before you go, learn the stories of how each became a permanent part of the SoFla landscape.

The Spanish artist who created it in 2012 invites visitors to stand in front of his gigantic sculpture and feel as if they are looking into a mirror. His message is that the head is the power of big dreams. The piece initially was shown in Rio de Janeiro and then traveled to Chicago’s Millennium Park, where it was installed in 2014. That’s where Perez saw it and purchased it as a promised gift to the Perez Art Museum Miami. “For ‘Awilda,’ Miami is the perfect place to live. Water is the main public space in the world,” Plensa says. The head is made of marble, resin and fiberglass, and is composed of 15 individual pieces, which are dismantled when “Awilda” is moved.

The French artist’s fiberglass sculpture of architect Charles-Edouard Jeanneret, aka Le Corbusier, is one of Miami’s most-photographed selfie spots. The 10-foot, waist-up bust of one of the pioneers of modern architecture is dressed in a suit coat and bow tie with pen in hand, deep in thought, creating one of his drawings. Veilhan based the sculpture on a photo he saw of Le Corbusier. The larger-than-life depiction originally was installed atop the Cité Radieuse (“Radiant City”) in Marseilles, France, one of Le Corbusier’s most famous buildings. The artwork, which Robins purchased for the Design District, fit with the developer’s idea of the district being a creative center, as well as a luxury shopping mecca.

“A Meditation on the Possibility of Romantic Love, or Where You Goin’ with that Gun In Your Hand, Bobby Seale and Huey Newton Discuss the Relationships Between Expressionism and Social Reality in Hitler’s Paintings”

“A Meditation on the Possibility of Romantic Love, or Where You Goin’ with that Gun In Your Hand, Bobby Seale and Huey Newton Discuss the Relationships Between Expressionism and Social Reality in Hitler’s Paintings” by Daniel Joseph Martinez; Patricia and Phillip Frost Art Museum, Florida International University, 10975 SW 17th St.

To look at the two nondescript silhouettes, standing about 6 feet, and made of white Carrara marble, you’d never know they were meant to make a big political statement. Martinez’s work depicts an infamous 1960s photograph of Black Panther revolutionaries Bobby Seal and Huey P. Newton. Martinez was inspired by large-scale sculptures that would stand guard before palaces and tombs in ancient Egypt, Greece and Rome, and he reimagined the pair as protectors of civil rights and liberties.

The sculpture, created in 2005, was part of the Frost Art Museum’s exhibit “Because I Say So …” in 2009. The owners of the work, Miami Beach art collectors Dennis and Debra Scholl, decided that the piece should make a permanent statement at the university museum, and they donated it in 2016.

The Brazilian artist’s creation was inspired by Henri Matisse’s 1910 painting of the same name. Fascinated by movement, she created a three-dimensional representation of the work in sculpture. In her homage, five male and female nudes whirl in a frenzy. It’s one of two such tributes to “La Danse”; one resides at Rio de Janeiro Botanical Garden; this one was donated to the village of Pinecrest in January 2014 by Pittaluga’s husband, Carlos Bueno, after her death.

Alana S. Perez, director of Pinecrest Gardens, says the Bueno and Bonnier families were instrumental in making the sculpture an important part of the Gardens. Carlos’ son, Roberto Bueno, and his wife, Tora Bonnier Bueno, are Pinecrest residents.

Tora is an art consultant and curator, and served as curator of the Garden Gallery. Tora’s mother, Annette Bonnier, also a Pinecrest resident and photographer, is a founding member and on the board of The Garden Fund, “which has done so much for the botanical well-being and beautification of the Gardens,” Perez says. “The Bueno and Bonnier families are truly philanthropic, artistic and cultured in every way.”