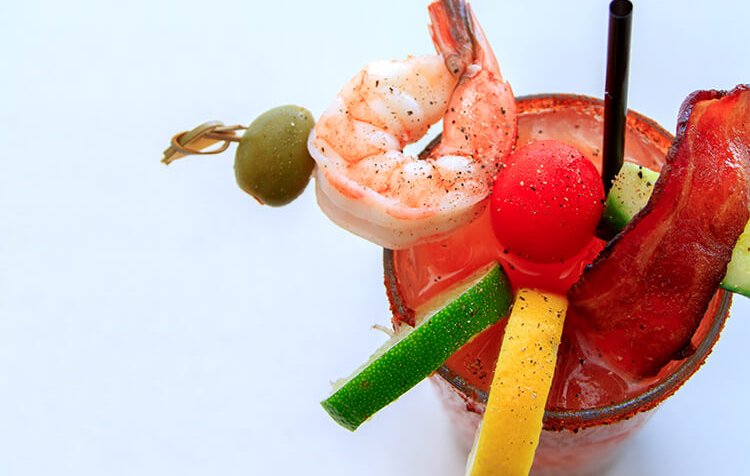 The bloody mary is a popular hangover cure—a morning-after-a-long-night drink referred to as “the hair of the dog.” So, for Lighthouse Point restaurant Nauti Dawg, having a place on the menu for a cocktail associated with a furry, four-legged friend seemed natural.

There was one hitch. While bloody marys typically are made with vodka, Nauti Dawg serves only beer and wine—not liquor. “We’re a small, neighborhood place, so we don’t keep a full liquor bar,” says Maureen Canada, who—along with her sister, Debbie Edwards, and brother, Christian Spieker—owns and operates the restaurant as well as Lighthouse Point Marina, where Nauti Dawg is located.

It looks more like an appetizer, presented with a skewer of pimiento-stuffed green olives on each end, cucumber spears, a cherry tomato, slices of lemon and lime, cooked bacon and a large cooked shrimp (thus requiring a small plate).

There was another reason the bloody mary fit the Nauti Dawg menu. “We named it after our mother, Mary,” Canada says. It’s also a tribute to her late father, Don Spieker, whose love for boats brought him and Mary from Wisconsin to Florida to live his dream of owning a marina. With a loan from Mary’s parents, they founded the Lighthouse Point Light Basin. He paid back his in-laws and ran the marina until 1997, when the children took over. They developed vacant land adjacent to the marina, created the Tillotson Square townhouse community and later decided the small marina restaurant should be under their umbrella, too, rather than run by outsiders.

In 2011, they reopened the restaurant as a Key West-style café, with mostly outdoor seating, where diners could take in the view of the water and boats. They also announced that dogs were welcome. Indeed, “Yappy Hour” at Nauti Dawg (2841 Marina Circle) includes a menu designed for man’s best friend, with half-price specials.