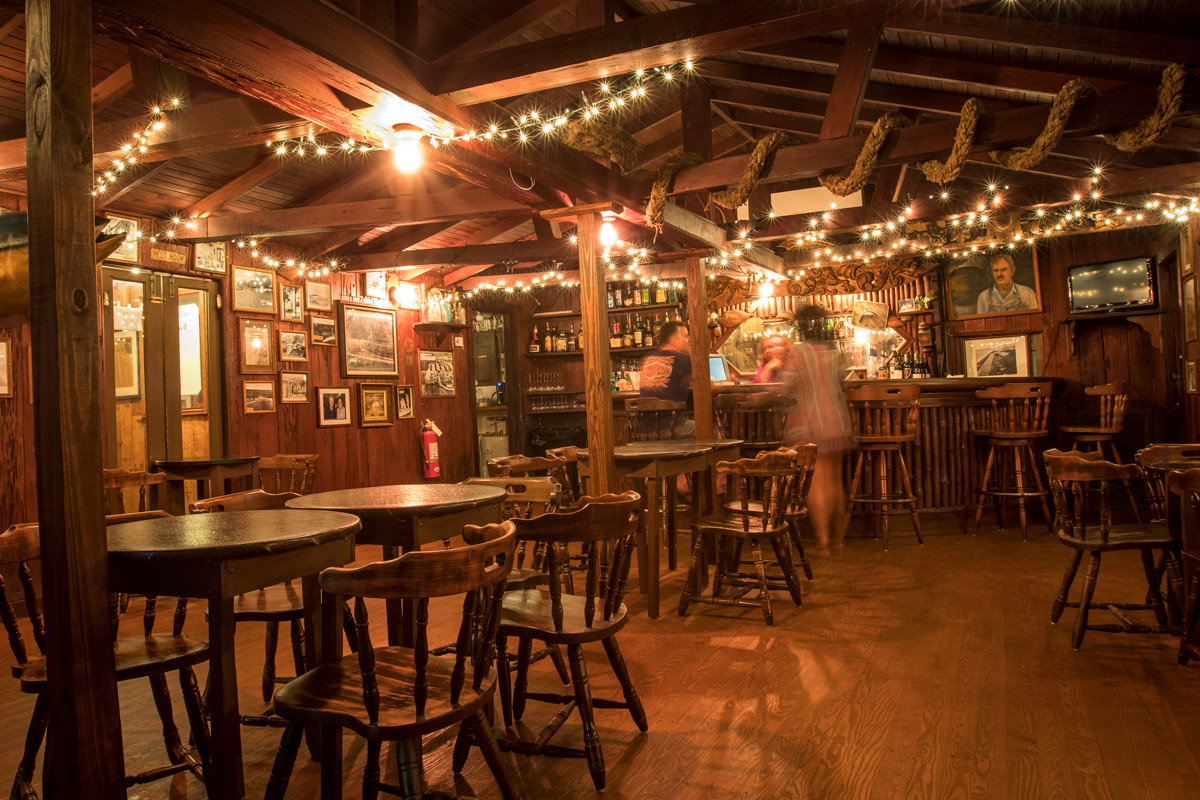 Tip of the Cap’s

For all the bootlegging history that awaits those who swing through the wooden saloon doors at Cap’s Place, the story of this Lighthouse Point landmark typically begins on a 27-foot vintage launch boat.
That’s the only way to reach the bar/restaurant on Cap’s Island. Once aboard the boat, which leaves the Lighthouse Point Yacht Basin every 15 minutes, you spend roughly five minutes on Lake Placid—the same waters where, 100 years ago, Eugene Theodore “Cap” Knight buried whiskey that had been illegally transported from Bimini.

On this night, congenial launch boat driver Joey Zelko entertains with tales of Lighthouse Point’s most notorious resident. He explains that in the 1920s, the smuggler sank his whiskey, hidden in burlap bags and tied to buoys. Down would go the whiskey, to the bottom of the lake. When a customer ordered a bottle, Cap would row out to the buoy and fetch the goods.

As the boat reaches the dock, two small wooden buildings lie low ahead. They look like they’ve been plucked out of old Key West. This hasn’t changed much since the day in 1928 when Cap, his wife, Lola, and 16-year-old Al Hasis, who had become like a son to the Knights, created the place. They cobbled it together out of wooden shacks and attached them to an old barge with some Dade County pine. They named it Club Unique, opening it as a speakeasy and gambling casino.

Things are much different in the neighborhood surrounding what’s now Cap’s Place. House prices range from $1 million to $6 million. No doubt the land Cap’s occupies is worth something, too, but there are no plans for it to close shop anytime soon to make way for a mansion.

Hasis built the bar by hand; it’s made of bamboo from the Everglades and polished wood from the decks of ships. The owners of Cap’s Place are Hasis’ children—Tom, Ted and Talle. Most folks stop into the bar first, before heading to the other side for dinner (the bar and restaurant are open evenings only).

Sam Corona is a fixture behind the bar at Cap’s. “If I’m not at the bar, then the owners are,” she says. Inside, everyone knows everyone. Sam doesn’t even ask most of the patrons what they’ll have to drink. She has glasses of wine and whiskey poured before customers have even made their way to the bar.

“You have people who have been coming here for 50 and 60 years,” she says. “We have so many regulars. I bet on any given night I know 50 percent of the people who walk in here.”

Stories from the past live on the walls. Behind the bar, there’s a large, carved wooden bowsprit from a Spanish galleon, which Al found on the beach. There’s an old cash register. Framed maps of Old Florida. And a painted, almost cartoonish, portrait of a man in overalls. It’s Cap. He was always in a denim shirt and bib overalls. Legend has it that down-to-earth Cap served Winston Churchill and Franklin Roosevelt, when they dined together at the restaurant in 1942, wearing his usual outfit.

On this weeknight, Sam doesn’t have a huge crowd at the bar. It’s early. “This place will fill up soon,” she predicts. She’s been wanting to try out a new grapefruit rum, and who better to try it out on than someone who has never experienced Cap’s? She mixes the rum with some cranberry juice and sugar-rims the martini glass. It’s her take on a cosmopolitan, sort of, she says.

But what to call it? Cap’s Cosmo? Not unique enough. She’ll call it the Lola, after Cap’s wife and partner in crime, who seated guests for dinner at Club Unique and never wore shoes. It earned Lola the nickname “the barefoot hostess.”

The Lola is a little sweet, while a bit dry. It is an original, like Cap’s Place. “The last of a dying breed,” Corona says of the bar and restaurant. “When this goes, there will be no Old Florida in Broward County.”