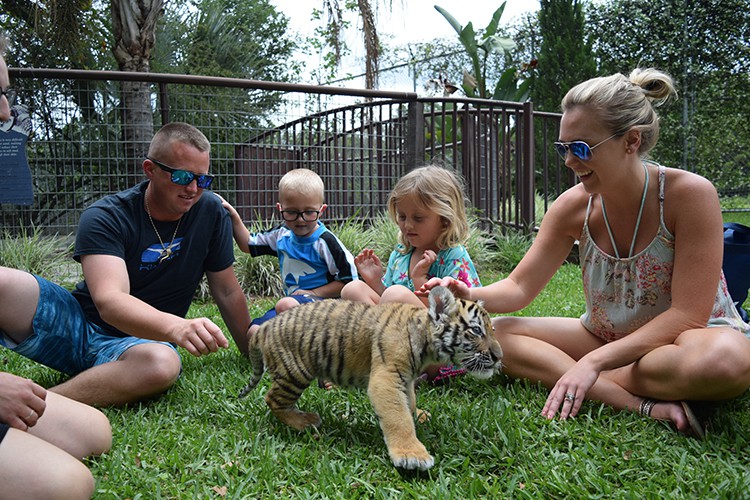 To describe John Coburn’s garden, a friend recently said, “You could charge $5 admission.” It’s lush and beautifully manicured, with Zen fixtures and butterflies fluttering about. The design came to him and his girlfriend, Dori Brenes, after a therapeutic day at Butterfly World.

They turned the space, which a year ago had not one plant, into a National Wildlife Foundation-certified Backyard Wildlife Habitat, where they house several species of butterflies, including the endangered monarchs. It’s become a sanctuary not only for the butterflies, but also for Coburn, who is still healing after losing his 19-year-old daughter, Sami, to suicide three years ago.

“I recommend gardening for people who have lost somebody,” he says. “It helped me.”

Through their organization, Love Sami, Coburn and Brenes take suicide survivors and those who are at-risk to Butterfly World and other locations to engage with nature. This month—National Suicide Prevention Awareness Month—they will take a group to swim with dolphins (Sept. 3) and to Dade City’s Wild Things, a zoo near Tampa, to interact with wild animals and swim with otters (Sept. 17).

The couple met in October 2014, about two months after Sami died. Brenes recognized and empathized with Coburn’s deep sadness—three years earlier, her father, a veteran struggling with illness, killed himself. She had her own history as a two-time suicide survivor, as well.

“I could feel that he was a good person, and my heart was breaking for him,” Brenes says. “I wanted to help him try to heal, so I started taking him out to have experiences with animals and with the ocean. When he was out in nature, I saw that he was happy.”

She also noticed that he felt better after engaging with people who have gone through similar experiences. She created lovesami.org—“a gift,” as he calls it—as a memorial site for his bubbly blonde daughter. “I told him that we can run with this and help other people so they don’t have to suffer like we both have,” she says. They grew Love Sami into a nonprofit organization, which they run out of their Deerfield Beach home.

About once a month, the couple invites survivors and people who exhibit suicidal symptoms to swim with tigers and learn how to dive. They go to animal sanctuaries and zoos. Many excursions are free or at a reduced cost for participants; most of the funding comes from Coburn and Brenes.

“You’ve got to let them know that they can live [and] enjoy,” Coburn says. “You don’t have to cry all the time. My biggest problem,” he says, pausing as he chokes up, “is thinking, ‘I can’t go on.’ I got drunk all the time.”

Together, they focus on self-care in the form of therapy, flotation tanks (also known as sensory deprivation tanks, which are said to have profound effects mentally, physically and spiritually), reiki (a healing technique that channels energy through touch) and volunteering. They say their goal is to turn Love Sami into a national organization.

“Seeing people who were suicidal smiling and holding a [baby animal] … it’s rewarding for me—and healing,” Coburn says. “The tigers, the butterflies—it just seems like they know, that they sense something and understand.”

Coburn and Brenes post often from Love Sami’s Facebook page: facebook.com/lovesami.org. Another resource is The Florida Initiative for Suicide Prevention, a nonprofit volunteer organization dedicated to suicide prevention programs, education, advocacy, research and the support of survivors of suicide. Visit FISPOnline.org for information.