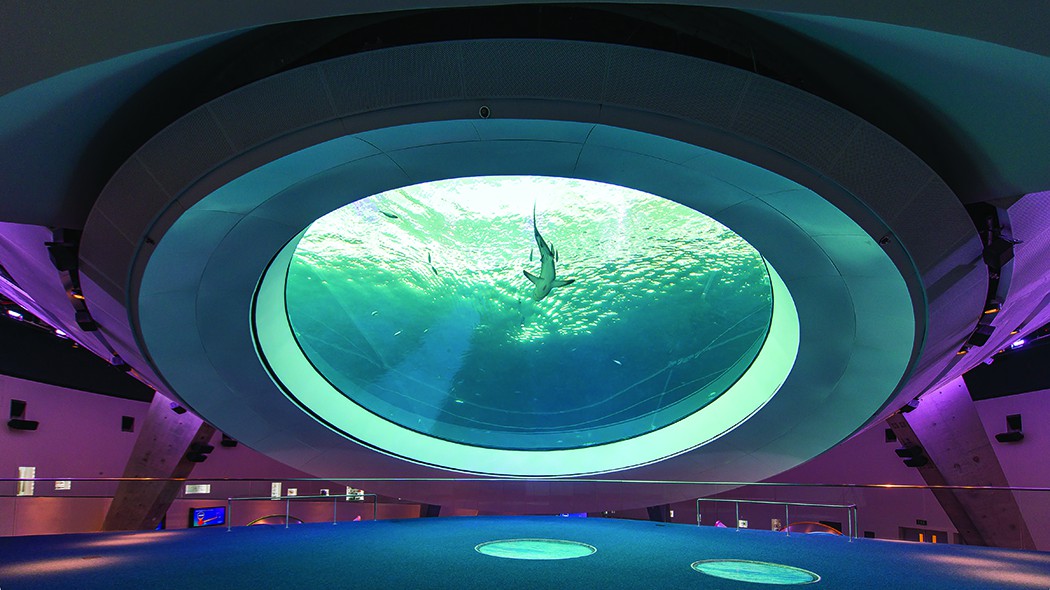 Night at the Museum

When the Phillip and Patricia Frost Museum of Science opened to the public in May, its staff members looked on like proud parents.

“It’s incredible—it was a once-in-a-lifetime opportunity to see it come to fruition,” says Alexandra Kuechenberg, the museum’s creative director.

Fernando Bretos, curator of ecology and director of Museum Volunteers for the Environment (MUVE), adds that he found it touching to watch families engage in the exhibits he helped create. “It gives you goosebumps.”

The new building is impressive: 250,000 square feet on four acres within Downtown Miami’s waterfront Museum Park, near the Pérez Art Museum Miami and Adrienne Arsht Center for the Performing Arts. It replaced a much smaller facility in Coconut Grove, and now features an aquarium, a planetarium and two rotating exhibit galleries.

The framework is done, and now the pressing work begins—engaging visitors. Pinecrest Lifestyle spoke to Bretos and Kuechenberg to learn more about how that happens.

What are your roles at the museum?

Bretos: I’m the curator of ecology—it’s an absolute dream job. I’m a marine biologist and conservation scientist, so I explore how the sciences move the needle in terms of conservation action. I developed a lot of content for the aquarium, which covers South Florida coastal habitats. I also direct a program called MUVE, which I created out of my own anxiety [for the environment]. It is a volunteer habitat restoration project, where Miami residents help restore coastal habitats and monitor their success. It’s almost like a museum outside of a museum.

Kuechenberg: My background is in fine art, sculpture and technology. I get to home in on how to interpret the science into experiences for our audience. That’s where my passion lies. I play a role in most of the museum’s experiences and content, physically in terms of the exhibit but also with brand and identity of the museum itself. Figuring out how we can create different content, different exhibits, different programs to access our local and global community is the challenge and also the gift of being able to open a new museum in this time and age. How does any museum serve its community? That’s what we’re all exploring and learning.

That’s a big task. Where do you start?

Bretos: One of my tasks now is to create our conservation program. How are we engaging people? “Citizen science” is this idea that everyone is a scientist, not just guys in lab coats. MUVE is one way we can capture that. I’m thinking to go a step further. What about all the scuba divers that come through the aquarium? We can then get them involved in, say, coral restoration. It’s really exciting—not just creating a museum, but also a conservation-conscious community.

Kuechenberg: The role of the museum is to showcase real research and real science as it’s happening, not just to showcase facts. I think it’s very important for the museum to not just be a gallery for information, but to be participatory and become catalysts for research.

What goes into creating an exhibit?

Kuechenberg: It starts out like any creative process very early on, with concepting, brainstorming sessions with the team—typically a group of two to three scientists to act as advisers on the topic. There are six to seven months of pre-planning to develop the concept before it can be executed. It’s very much like a construction project. Once we have the core together, we put it out to design companies to actually bring it to life. That process usually takes about two months. Then building and installation typically takes another eight months to a year. The length of an exhibit development is typically around two years. And that’s a quick turn around, actually—it’s a big long process. It’s very involved but also a very creative and fun process for me, because I get to work with scientists and specialists and learn from them.

Bretos: That’s the fun part, but it also takes the most patience. You’re bringing in all these different types of creative thinkers, like scientists, and in the case of the aquarium, aquarists.

How was that experience?

Bretos: We had all these ideas fleshed out for the aquarium—scientists and exhibit designers decided what will be in it, branding, style and layout. And then the aquarists came in and threw everything off [laughs].

Bretos: I learned, “Saltwater is going to ruin that” and “You can’t put that fish in a tank.” It’s good because it makes you think through diplomacy, and the teamwork is key and makes us a lot stronger. You’re patient because you’ve got to go through all these iterations.

Kuechenberg: Now we can put all of our energy toward the creative side, the activation of the content and the science behind it. It’s really interesting that you go from this idea, a concept, and then it becomes real. It’s really gratifying and rewarding and constant learning for us—and I think for everyone that’s experiencing it.

See what’s new this month at the Frost:

Visitors will explore the challenges and triumphs of space exploration and discover what lies ahead for human space flight.

A new after-hours series, on the second Wednesday of each month, will take a deeper look at the West Wing’s exhibitions. Each event will feature special guests, live performances, cocktails, discussions and interactive displays from 6:30 to 9:30 p.m. The series began in June with a closer look at the “Seeing: What Are You Looking At?” exhibition.

Where: The Frost Planetarium