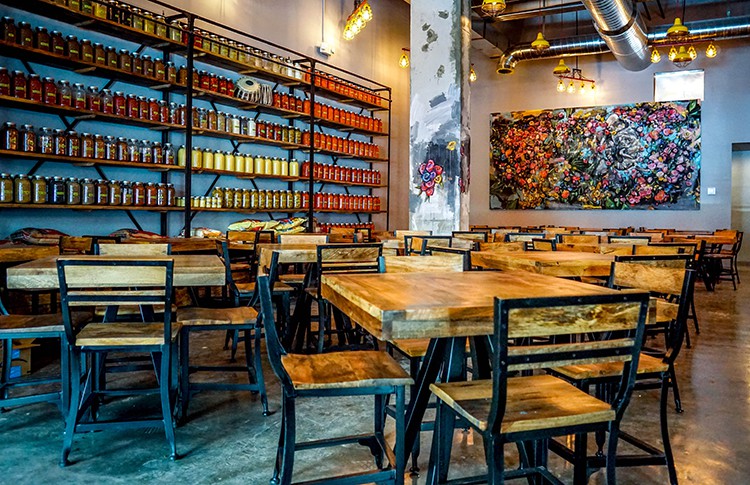 In the Miami neighborhood of Kendall, the new Indian restaurant, Ghee Indian Kitchen, brings a taste of home for its owner and executive chef, Niven Patel. Created by the Michael’s Genuine Food & Drink alumnus and his wife, Shivani, the restaurant modernizes Gujarati cuisine, rooted in India’s westernmost state.

The bright, industrially designed space invites diners to sample unfamiliar foods, such as lamb kofta (small balls of meat flavored with cashews, raisins and spinach) and backyard pakora, crispy vegetable fritters made with produce from Patel’s family farm in Homestead.

The restaurant is located inside Downtown Dadeland, and unlike neighboring restaurants, such as Harry’s Pizzeria and Pubbelly Sushi, Ghee highlights cuisine that many have never tasted.

“What we’re doing here is different from any other restaurant,” Patel says. “Most people who know Indian food only know one type, and it’s not like this.”

Patel named the restaurant after a type of clarified butter that is commonly used in cooking and medicine. Inspired by the concept of purity in Indian-style cooking, Patel uses unalloyed spices to enhance flavor instead of thick sauces and curry powders that overtake a plate.

“The way we cook and eat is so unique,” he says. “The flavors and their profiles are something that many people have never tried.”

Ghee’s menu is best described as a selection of dishes you would find on Patel’s dinner table. Plates rotate almost nightly, with Patel designing each one based on what is available on his two-acre farm, named Rancho Patel. He sources ingredients that he cannot grow or produce himself from other local purveyors.

The restaurant’s menus are printed daily, so there’s no guarantee a dish available during one visit will be there again. However, as the restaurant develops, Patel says he will create a lineup of staples that will be offered for longer periods of time.

One of Patel’s favorite dishes is green millet, which he describes as Indian-style polenta. Each plate has its beginnings in a small Indian village where Patel’s ancestors grew up.

“We connected with local farmers there, where they grow amazing grains that they harvest and ship to the restaurant,” he says. “Every time someone orders the dish, they’re supporting the village in rural India.”

Other popular plates, which are likely to stick around for some time, include chicken tikka masala, smoked-chicken samosas, aged-cheddar naan and saffron swordfish. The restaurant offers a family-style tasting menu, which serves three large plates designed to feed a whole table.

The restaurant partnered with J. Wakefield Brewing to create a unique beer menu, including Paan Wala, a saison (pale ale) with mangoes, fennel seeds and coriander, served in a golden can that features an illustration of Patel. Ghee also offers organic wines with a sake-based cocktail menu in the works.

“It all depends on what we feel like cooking that day,” Patel says. “That’s the fun part of being a chef and running a restaurant. It’s totally different from day to day.”

Since Ghee opened in May, Patel says the restaurant is doing better than expected. The 70-seat space, designed by Patel and Shivani, was custom-made in India, including the mango wood tables and the lighting. The restaurant’s spice wall features more than 240 varieties, all sourced from India and blended by Patel.

“What I want is to create more of a neighborhood restaurant where people feel at home,” he says. “It’s about having a great meal and not having to get all dressed up.”

For now, Patel is focused on growing Ghee into a Miami culinary mainstay. But he is open to expanding the concept down the line.

“I’m pleasantly surprised with the way Miami has reacted to our food,” he says. “I’m really enjoying this right now, and I want to enjoy it all before I do it again.”