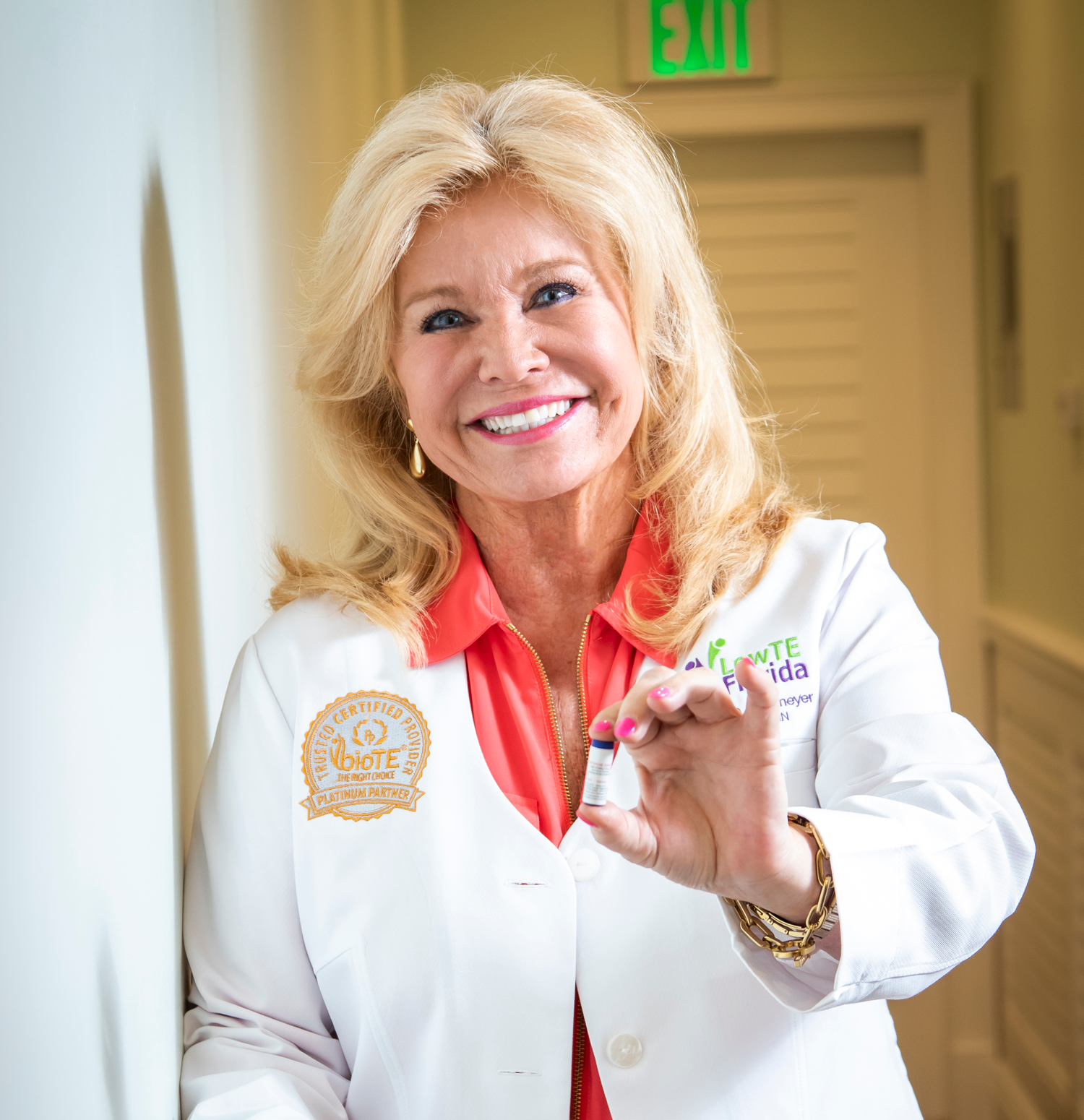 As much as it helps having Suzanne Somers as an advocate—and talking about sex being better than ever after 50, no less—the best advertisement for LowTE Florida might well be the esteemed nurse practitioner who runs the Fort Lauderdale-based business.

Five years ago, Carolyn Zaumeyer came home at the end of a workday with barely enough energy to put on her pajamas and pour herself a glass of wine. “I was so exhausted,” she says. “I remember laying on the couch and thinking, ‘Was I put on Earth to just work?’”

But then Zaumeyer began the same bioidentical hormone subcutaneous pellet therapy currently offered to patients at LowTE Florida. The plant-based pellets, produced by BioTE Medical (headquartered in Irving, Texas), help to stabilize hormone imbalance without the dangerous side effects connected to synthetic hormones in a 2002 study by the Women’s Health Initiative.

Within two months of starting the therapy, Zaumeyer (now 58) felt more energized than she had in years.

“I was cleaning out the garage, painting baseboards, checking off all the things on my to-do list,” she says. “I also noticed a mood lift. I felt like my old self. I have my armor again. Life isn’t always easy, but when my hormones are optimized, I can handle whatever the world gives me.”

Though Zaumeyer downplays her role as a pioneer in the field—“I keep picturing a woman in a covered wagon when I hear that term”—that’s exactly what she has been, and continues to be, to a generation of nurse practitioners. Graduates of that discipline didn’t think about striking out on their own back in the early 1990s, when Zaumeyer earned her master’s degree and nurse practitioner certificate from Florida International University.

Zaumeyer thought differently. The physician for whom she was working after graduating was referring his menopausal patients; Zaumeyer boldly asked if she could have them and start her own office gynecology practice.

“There were no guidelines about going down this road,” she says. “It didn’t say in the legislature that I couldn’t open a practice. But it didn’t say I could. I always kept my pocketbook near, in case they came to close me down.”

Instead, as the first nurse practitioner in Florida with an independent practice, Zaumeyer became a trailblazer. She went on to write two books that provided a detailed road map for other entrepreneurial nurse practitioners; interest in her as a speaker kept Zaumeyer on the road for years doing lectures and workshops around the country.

Back home, she had long been a proponent of hormone therapy for her menopausal patients. However, the WHI study in 2002—which listed side effects including breast cancer and stroke—“blew that out of the water.” Her growing interest in bioidentical hormones, whose molecular structure is virtually the same as hormones that naturally occur in the body, led Zaumeyer to Texas, where she studied under Gary Donovitz, the board-certified obstetrician-gynecologist who founded BioTE Medical.

In addition to the safety factor, Zaumeyer finds several other aspects of pellet therapy beneficial for male and female patients. For starters, it’s cardio-released instead of time-released, meaning the blood supply picks up pieces of the pellet (which is inserted in the hip area, between two and four times per year, depending on the patient and gender) as the body needs it.

“The beauty of the pellet is that there is no roller-coaster effect,” Zaumeyer says. “With other delivery systems—pills, patches, shots—you take it, you feel fabulous. Then, when you come down off it, you feel bad.”

In addition, LowTE Florida employs a computerized program that accounts for age, weight, hormone and thyroid levels—and a host of other lifestyle and clinical factors—to produce a personalized bioidentical hormone recipe based on the patient’s science.

Then, as Somers attests, there’s the sex life boost.

“Testosterone in women is inherently responsible for their sex drive and sexual satisfaction,” says Zaumeyer, who was the first bioidentical provider in the state when she launched LowTE five years ago. “And that can leave the building starting in their late 20s. I’ve had girls in their 30s tell me, ‘I have a great life, great job, great husband, but I don’t have those feelings.’ I’ll test their blood, and their testosterone will come back so low you can’t measure it. I’ll correct it, and six weeks later, they come in like rock stars.

“For men, I have guys who say they’d rather sit in the La-Z-Boy than have sex. You’re 58! You have so much life to live. … About 40 percent of my practice is male—and it’s not just to [boost] sex drive. It’s mental focus. It’s joint pain. It’s grouchiness.”

Though the specific pellet system used by BioTE Medical is not approved by the Food and Drug Administration, Zaumeyer says that the hormones used (the custom-compounded testosterone and the estradiol, which is a form of estrogen) are FDA-approved. More important, she adds, the results of optimizing your hormones are nothing short of life-changing.