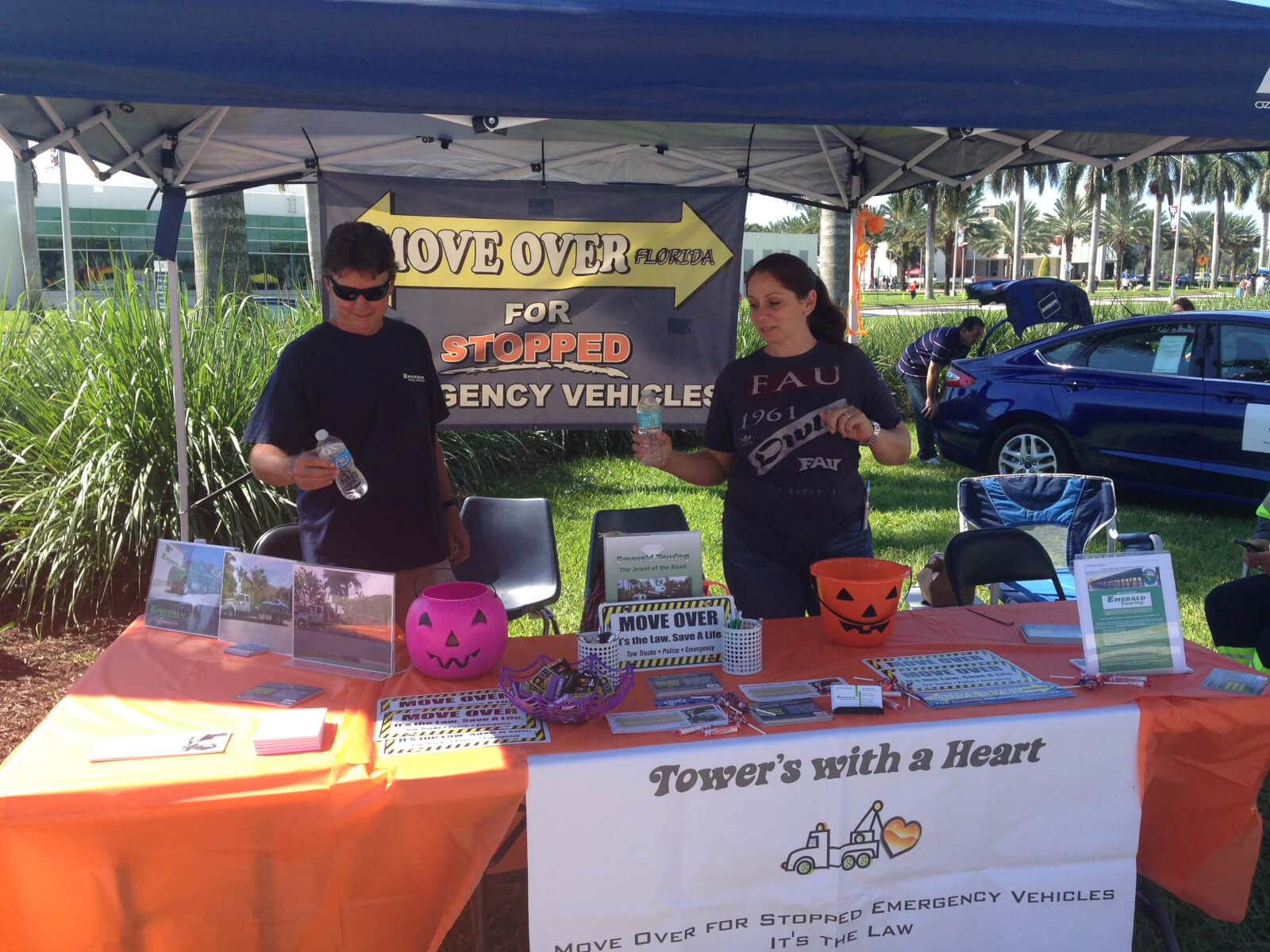 Coconut Creek residents might recognize Emerald Transportation’s trucks as the city’s contracted towing company. But what they might not know is that the company also is home to Towers with a Heart, a nonprofit organization that began in 2012 to educate Florida drivers about the so-called “move-over” law.

Jim Jennings, a member of the organization’s board, says tragedy inspired its birth. On Jan. 2, 2012, Emerald Towing operator Joseph Ricciardelli was killed by a driver who did not abide by the law that requires drivers to move over a lane, or slow to a speed that is 20 mph less than the posted limit if they cannot move over, when they approach stopped law enforcement, emergency, sanitation, utility service vehicles and tow trucks.

“At that point we were all searching for a way to honor Joe and to honor all first responders,” Jennings says.

The mission of Towers with a Heart and its five volunteer staff members is to promote the law and safe driving in Florida. Its signature fundraiser is an annual golf tournament to raise money for billboard advertising and outreach events. This year’s tournament in May drew about 130 golfers and raised about $16,000. It was attended by representatives of the Boca Raton Fire Rescue, the Coconut Creek Police Department and the Broward Sheriff’s Office, among others.

The organization also spreads its message at such community events as Unity Day in Pompano Beach and the Coconut Creek Butterfly Festival. Every year, on the weekend before Thanksgiving, it partners with administrators of Florida’s Turnpike to promote the law.

These outreach programs are where the organization sees the impact of its hard work.

“We got a lot of responses from people who come by with their young kids who haven’t driven yet and are getting ready to get their licenses,” Jennings says. “[Parents] will have us explain to their kids about the Move Over [Act] and the dangers of driving. We affect a lot of lives in that respect.”

This year, the organization is focused on putting out its first public service announcement in cooperation with first responders. It also is trying to pass a federal version of the Florida law, plus it’s putting together a scholarship fund for high school students.

Those looking to support the cause may like the Towers with a Heart Facebook page, volunteer at any outreach events or donate to the organization. To learn more, visit towerswithaheart.org or call Emerald Towing Service at 954.917.4747.