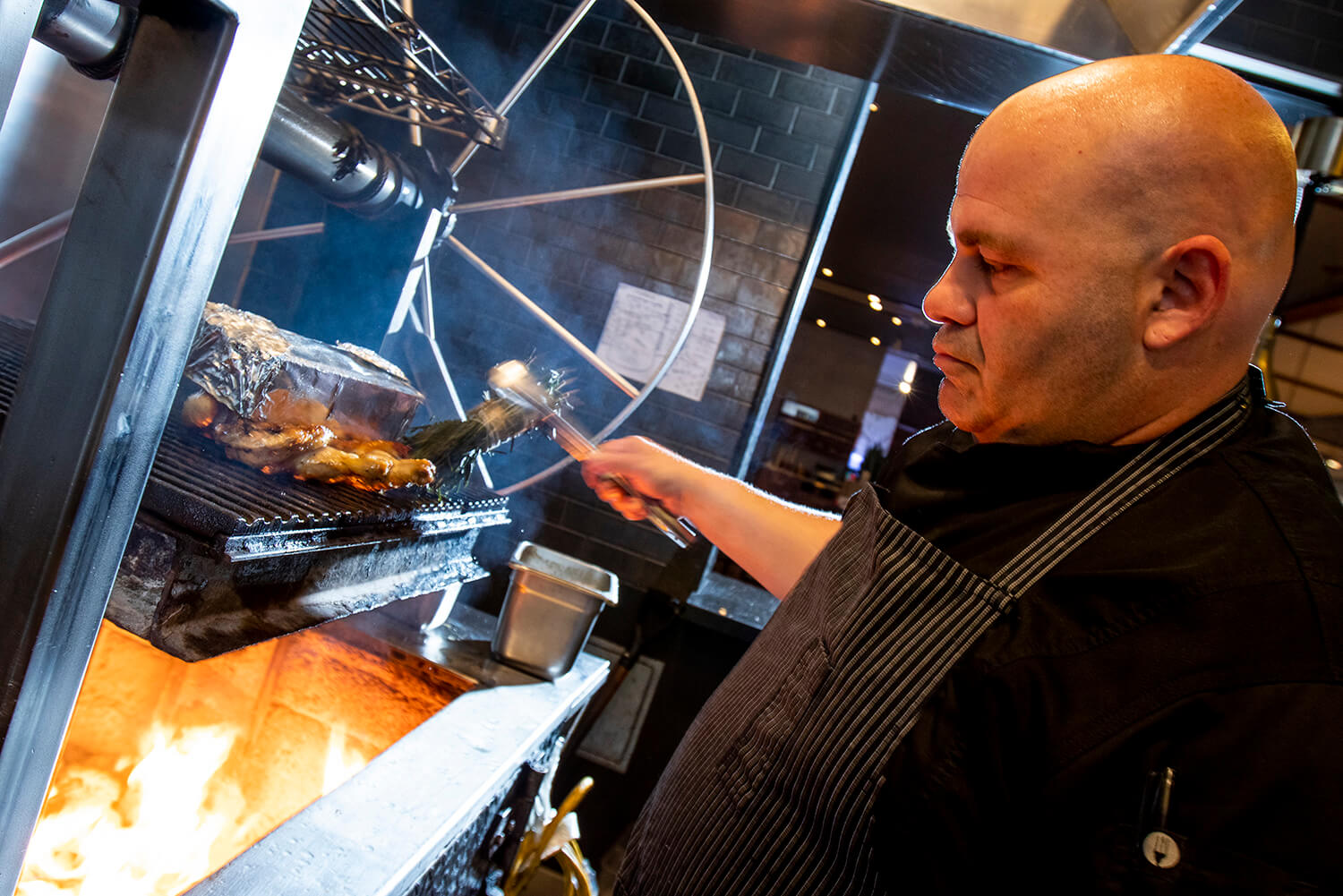 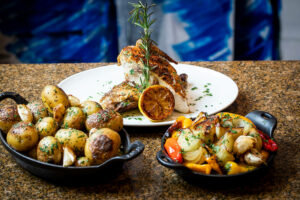 The dish: Chicken on the Brick

About the chicken: “This is a traditional Italian dish. We’re going to take out the backbone and then put the breast side down. We use a pan on top of the charcoal; you get the flavor of the charcoal, and the skin gets good and crispy. By putting a heavy brick on top, the chicken flattens out, and it cooks nice and evenly. Then we’re going to roast some potatoes and vegetables in that chicken fat, and pick up those nice flavors from the pan.”

About Howie: The North Miami native, a graduate of Johnson & Wales, was instrumental in raising the barbecue bar in South Florida with his decade-long run as chef/owner of Bulldog BBQ (2008-17). That venture, Kleinberg says, was a knee-jerk reaction to the pretense and trappings of high-end food, which he experienced early on as a classically trained chef—and as a contestant on Season 3 of Top Chef. “I wanted to work at a neighborhood joint where people could come in shorts, near the beach, and just feel relaxed,” he says. Kleinberg went on to serve as corporate chef at Smokey Bones before reimagining the foodie concepts—including a taco menu and a weekend pop-up barbecue—at The Anderson, the popular neighborhood bar in Miami.

Did you know: Kleinberg doesn’t regret his reality TV turn, but he admits that it revealed a side of him that he didn’t much like. “There was something about the pressure of TV and the idea of competition that brought out a bit of a nasty edge in me,” he says. “They know how to put people in circumstances that are going to lead to conflict, and that makes for interesting TV. … But there’s a big backlash now—and justifiably so—to all the toxicity in restaurant kitchens. You hear these famous stories about people having plates thrown at them or whatever it is. It’s time for a reckoning on a lot of fronts. It’s good that people are stepping back and saying, it doesn’t have to be this way. We don’t have to work people to death. We don’t have to scream and yell and threaten. There are other ways to manage people that will lead to happier, well-adjusted kitchens.”

Open-fire insights: “With barbecue, we [often] use offset heat; that’s where you build your fire to one side, and then put the product you’re grilling away from the direct fire. This lets the radiant heat do the job. It gives you more of an even cook than just blasting the heck out of it, burning the chicken on the outside, and leaving it raw in the center. … There’s something really primal about open-fire cooking. It’s not like gas, where you turn the knob, and the flame is the same every time. You have to get a feel for an open fire; it kind of becomes an art. And to develop it, you have to learn from your mistakes. That’s what chefs do. We’re experimenting, we’re tasting, and we’re adjusting. It’s a constant process.”

FYI: Check out the May issue of Lifestyle for Kleinberg’s chicken recipe.