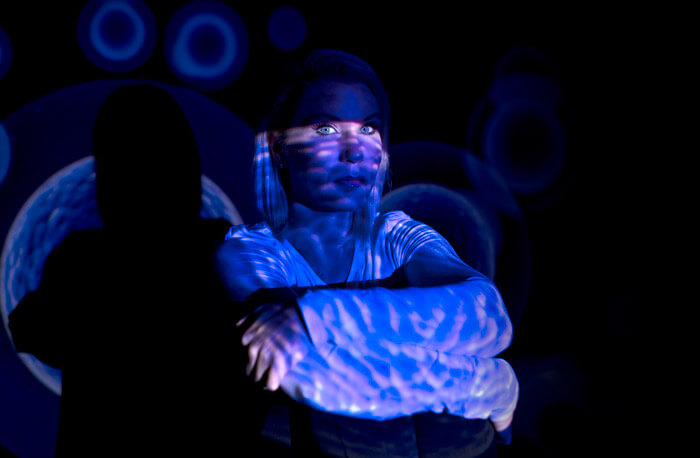 “I was sitting on the couch with my then-boyfriend (now, fiancé). He was trying to get my attention, joking around, and he poked the side of my breast by accident. He goes, ‘What was that. I felt something.’ He had poked me right on the tumor. I hadn’t noticed it. I thought it was nothing. Probably a cyst. I was 33. I’ve always been extremely active. I eat well. And there was no breast cancer in my family that I knew of.

“My OB/GYN sent me to a radiologist for an ultrasound. It wasn’t showing up definitively on the ultrasound, so they did a biopsy. I was so convinced it wasn’t breast cancer. I was naive. So, I went home for Thanksgiving [her family lives in Sarasota]. The doctor called me from her cell phone at 5 p.m., before leaving for the holiday break. She said, ‘I’m so sorry to be doing it this way, but you need to know that you have [stage 1, estrogen- and progesterone-positive] cancer.’

“I found out an hour before we were having a birthday party for my brother. Since we’re all home for Thanksgiving, the tradition is that we always go to this same pizza restaurant for his birthday. I was in shock. … I had to tell everyone. My mom, who is a very strong woman, says, ‘There’s nothing we can do about it tonight. Let’s go eat pizza and enjoy life. And we’ll start game-planning tomorrow.’

“And that’s exactly what we did.”

“I chose to have a double mastectomy with reconstruction. There were two additional surgeries after that to clear my margins because the double mastectomy didn’t clear them. I opted not to do hormone therapy so that I can have children. One reason I opted for the double was so that I didn’t have to do radiation. Also, they found that I have a rare mutation in my ATM gene, like the cash machine. The specific mutation I have [increases] my chances of recurrence.

“A lot of women, after the mastectomy, have expanders put in to give their chest cavity room for the implants. And then there’s another surgery for the implants. I was able to do it all at once. My surgery was nearly 10 hours.”

• “The worst thing you can do is Google ‘double mastectomy.’ And, of course, that’s what I did. It makes everything so much worse. So, yes, I was terrified.”

• “I actually found Instagram to be a helpful tool in finding other young women with breast cancer. You could follow their journey and see what they went through; some of it was very scary. But, I also was able to see young women who had pretty good results.”

• “The wondering and the waiting ended up being the toughest part. I was diagnosed in November, and I had my procedure in February [2017]. In between, it was all testing. At one point, they thought they had found more cancer. One day, I’m doing a lumpectomy; the next it’s a mastectomy.”

• “Of course, there were times I was in bed crying. But I did my best to remain in a strong mindset. I found the best thing was to continue working. I didn’t tell my [radio] listeners until the day before I left work for the surgery. Cancer patients really want to feel normal. Thinking about work, grocery shopping, the tasks of that day, all that was extraordinarily helpful for me. I wasn’t thinking about cancer all the time.”

• “I’m a very private person, even though I have a public job. I’m glad I sat with it and dealt with it privately for a while. Once I shared it publicly, I was inundated with support. Which was amazing. But it also makes it very real.”

• “Having a double mastectomy at any age is difficult. Having it when you’re under 40 was extraordinarily difficult to grapple with. You’re still very sexual. You’re still worried about being attractive to men. How was my boyfriend going to perceive me? I’m going to lose my breasts. They were telling me at the time I may not be able to have children. I sat down with him and said, ‘Listen, I know you didn’t sign up for this. I get it if you can’t deal with it.’”

• “I’m very realistic about relationships. I would’ve understood if he couldn’t handle it. It’s a lot. And it’s not something that every relationship can survive. He told me afterward that [leaving] never crossed his mind. … Having someone willing to be there with you for your toughest times bodes well for our future, doesn’t it? Life is going to throw us curveballs. I know he’s going to be there for it all.”

• “I learned how strong I am. I had never faced anything terribly adversarial in my life to that point. This was my first experience. And, if I’m being honest, I impressed myself. I felt like, if I can get through that, I can get through anything.”

[Editor’s note: Women who carry a mutation in the ATM gene “have an estimated 20 percent to 60 percent increased risk for breast cancer,” according to the University of California, San Francisco’s brca.ucsf.edu website.]