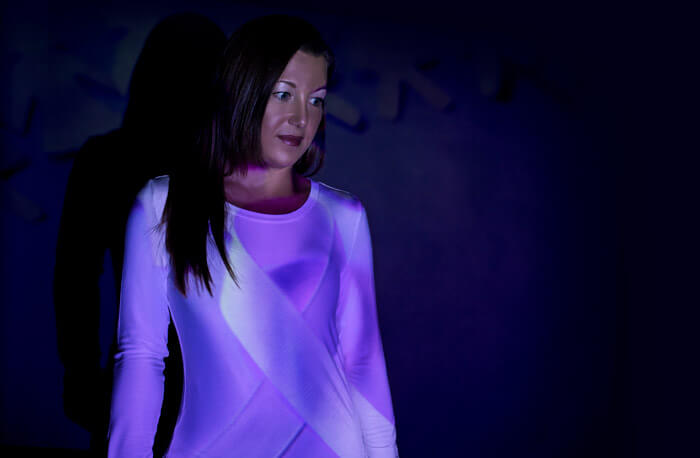 “I went in to my [gynecologist’s] office for my annual physical, and I expected to walk out with a prescription for birth control and a clean bill of health. I am so thankful that she … actually felt something.

“Luckily, I worked at [Good Samaritan Medical Center]; I was their chief strategy officer. I called the breast center as soon as I walked out the door. I was like, ‘Oh, my gosh … this is like an alternate universe.’ It was disbelief.

“I had [estrogen receptor] and [progesterone receptor] positive, HER2-negative, stage 1 breast cancer. Based on my age, they recommended I do genetic testing, so I was also diagnosed as being BRCA2-positive, a genetic mutation which probably more than likely caused the cancer.”

“From my day of diagnosis to my bilateral mastectomy, it was 30 days. They put in tissue expanders. … They took out lymph nodes. There was only cancer, we thought, on one side, but because of the BRCA2 mutation, it was recommended to do bilateral. It was a good thing that we did because there was actually very early-stage cancer in the other side also. But my lymph nodes were clear, so no radiation, no chemotherapy.

“Because of the BRCA-positive [gene], I had a subtotal hysterectomy, so they took out my uterus, my ovaries, and then did reconstruction [surgery].”

• “[After the diagnosis], there were a lot of tears. It was scary. It was just disbelief. … The hardest call I think was to my mother. … My surgeon saw me in the office and we started to put a plan together. Once that was going, I was like, ‘OK, now I’m on a mission. I’m going to beat this. Let’s just start doing what we need to do. …’ I’m not good at sitting around and feeling bad for myself.”

• “Once I had my surgery, I still had to have all of this down time to heal and recover. I was running 5 miles a day and surfing and paddleboarding, and, all of a sudden, I had all of that taken away, and I wasn’t allowed to do anything. … That was really tough. Mentally, I didn’t have an escape.”

• “I had to have a subtotal hysterectomy. I had to have an endoscopic ultrasound done. Then my reconstruction. I was two weeks out of having all of those surgeries, and then my mom was diagnosed with breast cancer. I forced my sister to get genetic testing—and she was BRCA-positive also. It’s been an interesting 18 months for us. We all had bilateral mastectomies in 2017. … It was like, are you kidding me? This is crazy.”

• “It was much harder to see my mom and my sister go through surgery and recovery than it was for myself personally. I finally started to understand why my mom was always on pins and needles.”

• “Two days before [the hysterectomy], I probably broke down worse than when I had the cancer diagnosis. I felt like I was losing control and that was tough. Not that I ever wanted to have kids, but if I changed my mind, I had that option. Now, I’m fine. … I know I am happier not having to worry that there’s a cancer growing inside of me.”

• “It’s been a year out now from my last surgery, so I’m becoming more comfortable with my scars, but there are certain clothes that I still won’t wear because there’s just a little too much scar that shows for me.”

• “We were a close family to begin with, but there’s a whole other level of love and of making sure that you prioritize moments in your life—doing Sunday family dinners, going to the beach, just taking time to stop and breathe and enjoy life with them.”

• “I needed to have faith in myself that whatever was going to be thrown at me that day, I was going to be strong enough to face it head-on and get to the next step. But that was hard because I’m a big planner. … Eighteen months later, I still have to remind myself of that.”

• “I’m more comfortable with who I am as a person after going through this, even though I might be a little more self-conscious about my outward appearance sometimes. I’m much more confident. I’m much more willing to just go for it, take a risk, live every moment. I’m not as conservative as I used to be. I never would’ve gone skydiving before this. Last year, I went skydiving [to celebrate] four or five months of being cancer free. Since then, I’ve gone two more times and I’m hoping to get my certification so I can skydive alone.”

• “[I learned] that I need to take time to enjoy the moment, to not be so worried about what the next thing is. … It’s OK if the ironing sits on the board for two weeks because it’s more important that you spend your Saturday [with someone who] calls and wants to go to a barbecue.”